This post covers the darker side of Helios‘ family. These include Circe, Pasiphaë, and his granddaughters Medea and Hecate. Unlike his brighter descendants, who were mostly the children of Klymene, these were the children of Perseis, an Oceanid nymph. (Her name comes from the word persô, meaning to destroy, slay, ravish, or sack with fire, so perhaps her dangerous offspring shouldn’t be a surprise.)

Perseis had four children by Helios: two girls, Circe and Pasiphaë, and two boys, the future kings Aeetes and Perses. Another possible meaning for Perseis is “Persian” and it is notable that Aeetes became the king of Colchis, at the east end of the Black Sea, while Perses ruled Persia. When Perses died, his niece Medea took over, and the kingdom was called Media. (This bit of folk etymology explains the Medes and Persians, I guess.) In some versions she was the ancestress of the Median royal family. (The Magoi, or magicians, were also linked to her in this story.)

Aeetes is mainly famous as Medea’s father, and for the part he played in the story of Jason and the Argonauts. When Jason arrived to claim the Golden Fleece, Aeetes set him a series of tasks to accomplish so he could have it. Since Aeetes, like all his family, was powerful in magic, these tasks were pretty much impossible, but Aeetes’ daughter Medea took a shine to Jason and helped him. (Like Ariadne did Theseus.) Later, she helped him escape Colchis and they went to Athens.

Medea: was already a proficient sorceress and priestess of Hecate when she helped Jason get the Fleece and escape from her father. This incident is the first evidence of her shocking ruthlessness; she kills her little brother and scatters his body parts behind the Argonaut’s ship, knowing that her father will have to stop and gather the pieces for burial. She and Jason continued to Jason’s home on Iolcos.

Medea used her magic to revive Jason’s aged father, but when the daughters of Pelias, who had sent Jason on his quest, tried to use Medea’s magic on their father, she tricked them and Pelias died. She and Jason then fled to Corinth, where they settled down and had a family.

Later, when Jason left her for the king’s daughter, Glauce, Medea sent her a poisoned robe and coronet, which killed both Glauce and the king. (Her sons helped her, and the citizens of Corinth killed them, according to one version, or else Medea killed them by accident. Only in the play by Euripides does she kill them as revenge on Jason.)

Medea escapes, with a little help from Helios. (Theoi.com)

She then fled Corinth, in her grandfather’s chariot, went first to Thebes and then to Athens, where she married Theseus’ father. In this version they had a son, and when Theseus returned, she tried to kill him so he wouldn’t supplant her son, but her plot failed. Finally she returned to Colchis, helped her father regain the throne, and perhaps relocated to the Iranian plateau, ruling the Medes.

(The most interesting take on Medea comes from the medieval writer Christina de Pizan, who describes her as a great magician, without any mention of murdering her brother and planning Pelias’ death.)

Circe: another witch, renowned for her knowledge of herbs and potions, or pharmakeia. She appears in the Odyssey, living on the island of Aiaia in a mansion in the middle of a dense woods. (Her island lay to the extreme west of the Mediterranean, unlike her cousin Perses.) When Odysseus’ men landed, she laid on a feast for them, during which they drank her wine laced with honey and a potion that turned them into animals. 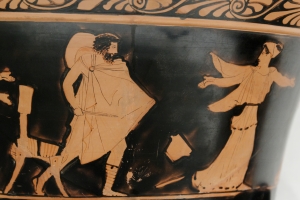 Odysseus, of course, set out to rescue his men, advised by Hermes. After he learned how to approach the sorceress, they settled down and lived amicably for a year, with his restored men. Later, in the Theogony, Hesiod said that she bore children to him. (In the Argonautica she purified the men after the death of Medea’s brother.)

In Karl Kerényi’s book Goddesses of the Sun and Moon he describes Circe as a sun-goddess (11), and potnia theron (7-8).

Pasiphaë: best-known for an affair with a bull. You won’t be entirely surprised to hear that she had somehow annoyed the gods, who struck her with an unnatural passion for King Minos’ best bull. Daidelos built a wooden cow-form that she hid in, and she conceived the Minotaur. (Also known as Asterion.) He was hidden away in the labyrinth to ease her shame. 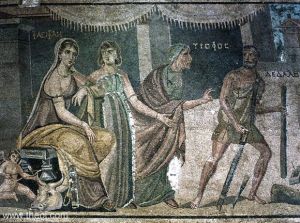 The family tendency came out under stress: when she found out that Minos was being unfaithful, she gave him a potion that caused him to ejaculate poisonous creatures, so his lovers died. Since Pasiphaë was immortal, she was immune. You will be relieved to learn that one of his lovers, Procris, also knew her herbs, and defeated the spell.

Pasiphaë was an oracular goddess at Thalamae, in Sparta. Pausanias describes a small shrine by a stream, with bronze statues of Helios and Pasiphaë, one on either side. (He equates her with Ino and Selene. The ephors or rulers of Sparta used to sleep in the temple for oracular dreams. (Apparently these dreams were acted on: twice during the Hellenic period the government went through major upheaval because of these dreams.)

Pausanias, a Greek writer of the 2nd century CE, describes Pasiphaë as a lunar goddess, and probably that’s how people saw her then. However, there is evidence that the Cretans did not see the sun and moon the way that later Greek culture did, and Pasiphaë may well be a solar deity like her father. The bull she mated with may well symbolize the moon, as bulls often did.

Hecate: almost needs no introduction, so famous is this witchy granddaughter of the sun. Different sources give her different parents, but one common version gives her Perses (“Destruction”) and Asteria, who ruled divination at night (everything from astrology to necromancy).

She carried on the family tradition as the goddess of witches, sometimes as one goddess, sometime as three, Hecate Triformis, who governed the crossroads. Both she and Helios witnessed Hades kidnapping Persephone, which got her a role in the  Eleusinian Mysteries as well. The sources tell us that she had power in heaven, the earth and the underworld. This may explain why she, along with the all-seeing sun, was witness to Persephone’s fate.

It is common to think of Hecate as a lunar goddess, but this only became a common way of thinking about her in Roman times, and seems to limit the great power that the Greeks saw in her.

Helios’ family with Perseis is so much more well-known than his other children (except for Phaethon) that it almost seems that being a villain or at best ambivalent is the best way to be remembered. Circe on her island, Medea in her serpent-driven chariot, or Hecate of the three ways linger in popular consciousness in a way that the Heliades and their Titan forebears don’t.

6 thoughts on “The Dark Side of the Sun: Circe, Medea, Pasiphae, Hecate”