The main star in Scorpio is the 15th brightest star in the sky. Its name means “Rival of Ares” or “Equal to Ares”, because of its brightness and red colour. And its size – Antares is a red supergiant, 3 000 times the size of our sun. (If we switched our sun for Antares, its bulk would extend out to Mars.) A clould of reddish metallic dust surrounds it, five light years in diameter, which makes it look even larger in the night sky.

The brightness of Antares varies from +0.6 to +1.6 magnitude. It is another binary star (see picture below) whose partner is emerald coloured and far hotter than its giant but cooler neighbour.

As you might expect from a supergiant, cooling star it is near the end of its life, and will go supernova soon. (Astronomically speaking.) After that it will be a tiny neutron star or a black hole. (Betelgeuse in Orion is another red giant that will go supernova.)

Antares and its surrounding stars are part of the Scorpius – Centarus association, a group of stars approximately 11 million years old. Several of them have already gone supernova, leaving clusters of gas bubbles behind them. There are also star-forming molecular clouds, including the Coalsack Nebula.

Both the Arabs and the Babylonians named it for its location in Scorpio: heart/breast of the scorpion. (The Latin name for it, Cor Scorpionis, expresses the same idea.) Antares was one the four royal stars of the Persians, along with Aldebaran, Regulus and Fomalhaut. (Back then these four stars and their constellations would have marked the solstices and equinoxes.) The four stars also had power over the four directions, with Antares governing the west.

Payam Nabarz (Loc. 1037) points out that Antares and Aldebaran, as representing signs ruled by Mars and Venus (Scorpio and Taurus), and red stars, made up the fiery, passionate pair of Royal Stars, with the other two, as white stars, making up the royal arm of the axis. 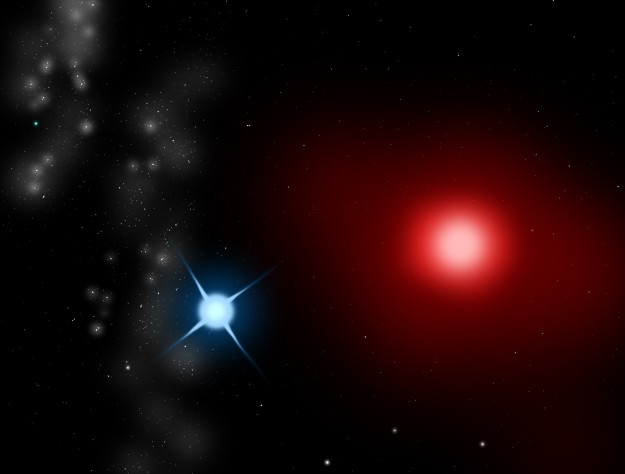 Antares A and B. From Wikimedia commons, image by Sephirohq.

Ishara was a Babylonian goddess, whose oldest cult centre was at Ebla.The Hurrians, who associated her with the constellation Scorpio, also worshipped her. Her children were the Sibbiti, or seven stars.

While the Babylonians saw her primarily as a love-goddess, calling her belet rame, or lady of love, the Hurrians and Hittites saw her more as an underworld goddess, who healed the sick and enforced oaths. (The Hittites in particular saw her as punishing oathbreakers with disease.)

The Egyptian goddess is usually shown with a scorpion on her head, or else as a scorpion herself. She protected people from scorpion stings, as well as snakebite and bee stings. Naturally she was a protector of the pharaoh, like the snake-headed goddess Wadjet. Serket had a walk-on part in the myth of Isis and Horus, protecting them from Set.

Perhaps because of this, she looked after pregnant women and mothers. She was also patron of healers and magicians, which would have included her priests.

Echoing the dual nature of many of Egypt’s fierce goddesses, she showed a different side to wrongdoers, punishing them and even helping capture the serpent Apep, who menaced the sun-god Ra every night.

The dragon that gnaws at the roots of the world-tree Yggdrasil is often identified as Scorpio. Since the constellation lies at the low end of the western sky, especially in the North, it makes sense that this constellation, which lies at one end of the Milky Way, would remind the Norse of a dragon. Nidhoggr’s role is mainly cosmic. He takes wing at the world’s end, with corpses hanging from his wings. (This site has a cool image of Nidhoggr.)

In Greek mythology, the earth-goddess Gaia sent the scorpion to kill the hunter Orion after he boasted that he would kill all the game on earth. Another version has it that he raped one of Artemis’ attendants, and the goddess killed him in retaliation. (Or, Apollo sent the scorpion to sting the amorous hunter before he could marry his sister.)

After he died and the gods placed him in the sky, they put the scorpion there as well, on the other side of the sky. It pursued him across the heavens, with Orion setting as Scorpio rose.

In astrology Antares takes its cue from Mars, and so indicates war, violence, or, more positively, self-assertion and self-confidence.

6 thoughts on “Antares: the scorpion’s heart”