There are elder trees all over Europe and Asia, but no one has been able to trace a root word common to the Indo-European languages for it. Considering that other widespread trees like birch and oak do have names that are clearly related across the whole language family, it seems strange that a useful tree like the elder should be overlooked. (Hyllested: 119) Or was there a reason behind this refusal to name the tree?

Names for elder in Germanic and Slavic languages (and Latin) can be traced back to the words for “gray” or “dusty, moldy”. These names may refer to powdery mildew, a plant disease, or they may refer to a more mythical type of grayness.

Folklore from Denmark, Germany and England mentions an elder mother, whom it was unwise to offend. Similarly, Scottish and Irish folklore related the elder to witches and fairies, and tabooed it. The Elder Mother may lie behind this unwillingness to name the tree directly, and its image as the “gray” tree.

Who is the Elder Mother?

She is best known from a fairy tale by the Danish author Hans Christian Andersen. He presents her as a benign old woman who appears to a sick boy and shows him visions of foreign lands and his future life. Then he wakes up and realizes it was only a dream.

While Andersen, who was writing for children, naturally wanted to make the Elder Mother seem nice, the folklore says otherwise. You had to ask permission before taking wood from an elder tree, otherwise punishment swiftly followed. Even then, many people considered that anything made of elderwood was unlucky.

One Danish story tells how a baby laid in a cradle made from elder wood got no rest because the Hyldermor used to pull its legs until it cried. Similarly, children who slept in a room with elderwood flooring woke in the night with sore, swollen chests, where something had been sucking at their breasts. It stopped when they were moved to another room. (Keightley: 162-3)

Other stories say the Hyldermor would pinch the children in the cradle until they were black and blue, or pull their legs all night. In Germany Dame Helder took revenge for thefts of her wood. (Watts: 129)

So the Elder Mother was vengeful, but she was easily put off. According to both Danish and English folklore, you had to recite the following rhyme before cutting the wood, thus escaping the curse: “Old Woman, give me some of thy wood and I will give thee some of mine when I grow into a tree.” As one old man noted, you would have to be dead a long time before you grew into a tree. (Heanley: 57)

Another version went: “Old Nanny, Hyldemoer, if I may, I must take a bite of your forest,” after spitting on the ground three times. This may have been to ward off evil, and suggests a bit more fear of the Mother.

In England the Elder Mother was often known as the Old Mother or Old Girl, and in some places they said that cutting down an elder would cause a death in the family. (Watts: 129) In the same vein, an old English rhyme warns:”Elder is the Lady’s tree, burn it not or cursed ye be.”  This may be a reference to elder’s notorious smoking and scanty heat when burned, but it portended a death.

Elder trees are small, and the story about the floor planks seems unlikely, but elder was used to carve small items. It is a hard wood, and polishes well. One site suggests hollowing out the branches to make beads, which gives you a good idea of their size. 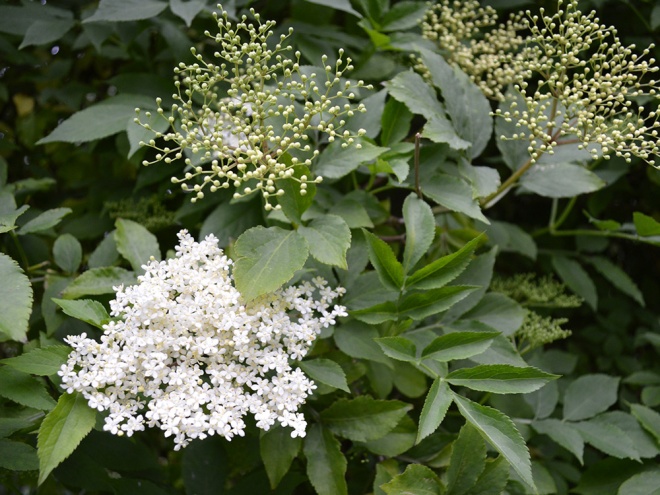 Elder was the witch’s tree, and legends about witches and elders often border on the tales of the Elder Mother. For example, a farmer in Somerset discovered that his cows were being milked by a witch, disguised as an elder. He tried to confront her, but it went wrong, and his wife had to rescue him by burning down the tree and making a cross in the ashes. The tree and witch were often conflated like this, and the tree was said to bleed if cut.

The witch tree at the Rollright Stones in Oxfordshire was “bled” like this every Midsummer, to temporarily break the spell the witch had cast over a king and his men, turning them into the stones. The witch became the elder tree that stood on the site. Her tree “bled” if cut, especially when in blossom. (Evans: 36)

(Another version is that Mother Shipton, the famous prophetess, challenged the king and turned him and his men to stone.)

Irish witches apparently used elder boughs as magical horses, I guess as a sort of cross between broom and hobby-horse. In Scotland it was more ambiguous, as you could stand under it at Midsummer to see the fairy troop, but planted in your garden it protected you from witches and fairies.

Many connect the Elder Mother and the Germanic goddess Holda and the folkloric figure Mother Holle. It is tempting, since Holunder is the German for “elder”. (Linguistically this is questionable, but most people aren’t linguists, so “sounds alike” would become “is alike” in most people’s minds.)

The problem I can see with the idea of Holda or Holle being associated with the Elder Mother is that both of them spend a lot of time travelling around, while the Elder Mother seems to be tied to her tree. It is hard to imagine her leading the Wild Hunt or inspecting women’s spinning on Twelfth Night.

Apparently once you could find elder planted all over Northern and Central Europe, and even some Stone Age dwellings in Scandinavia had elder remains. (Gardenstone: 28) Apart from the plant’s usefulness (the flowers and berries are edible, and it produces dyes) it was supposed to ward off evil, and as we have seen, woe betide anyone who cut down an elder tree.

Perhaps the tree was itself a sign – a sort of magical Neigbourhood Watch, signalling both to the travelling goddess and any evil spirits that the Elder Mother was respected, and on the alert.

English lore, including “Elder Lady”
A collection of lore about the Elder Mother
Druids’ page on the elder
Occult meanings for elder
British lore and uses for the elder
Danish folklore (part three of a series on elders and folklore)
Paghat’s gardening and mythic lore
Trees for Life, a UK site: myths and uses for tree. (For more about dyes, see here.)
Pinterest site on elder and the Elder Mother
The Legend of the Rollright Stones

12 thoughts on “The Elder Mother, a mystery”