There are two stories in Norse myth where part of a dead body is transformed by being rubbed with herbs. One of these is the mystical, cosmological story of Mimir’s head, which Odin revived by smearing with herbs and chanting over it. The other is a conversion narrative, in which a preserved horse’s penis is part of a house cult that St. Olaf brings to an end.

So these stories could not be more unalike. But the penis grows and “becomes lively” after the woman of the house covers it in herbs and wraps it in linen. So what herbs do you use to enliven a horse’s penis and a god’s head?

The cosmological poem Voluspa tells us that Odin speaks with Mimir’s head, but doesn’t give details. We learn more from Snorri Sturluson’s Heimskringla, a history of Norway’s kings:

Odin took the head, smeared it with herbs so that it should not rot, and sang incantations over it. Thereby he gave it the power that it spoke to him and discovered to him many secrets. (ch. 4)

Odin had with him Mimir’s head, which told him many tidings from other worlds. (ch. 7)

The other story is a little bit more informative. According to Völsa þáttr (pdf)1:

The old woman stood up, approached her son, and took the thing [horse’s penis] from him, saying there was no need to waste a thing which might be of use. She then went into the kitchen, dried the member carefully, and wrapped it in a linen cloth along with leeks and other herbs, to prevent it from rotting, and then laid it into her coffer…

All that autumn she would retrieve it every evening and address it with a prayer of worship, believing it to be her god, and making the rest of the housuhold accept this heresy. By the power of the devil the thing grew and became so strong, that it could stand upright by the old woman, when she wanted it to.

So the woman also speaks powerful words over the horse’s penis, along with preserving it in linen and smearing it with herbs. She and Odin both practice galdr, a “spell or incantation” that activates the magic in the herbs and linen.

Leeks and linen were both magic, as we shall see, and were combined in magical charms from early times. A runic formula discovered in a woman’s grave from the 400s (CE) reads: linen leek wealth, lina laukaz f(ehu). (McLeod and Mees: 103)

Leeks: longer than it is wide

The word “leek” frequently appears in magical charms, often ones for virility. The word appears twice in Eddic poetry in kennings: spear-leek, and noble-leek, which also imply masculinity. Also, in one of the sagas, a man dreams of leeks growing from his knees; the author tells us that he was dreaming of his children. (Lehmann: 166)

(Per Mikael Bynke’s comment below, I should point out that in this context the word “leek” can mean any allium; these sources could equally be referring to the green shoots of wild onions or wild garlic.)

Laukr could also take on broader meanings, such as protection, when worn as a charm, or prosperity generally. In the Eddic poem Sigdrifumal the valkyrie tells the hero that to keep his drink from being enchanted:

8. the cup must be signed to guard against ill,
and leek cast into the liquid;
(Orchard’s trans.)

Although she doesn’t say which sign, in verse seven she mentions the rune “need” as a protection when drinking, cut into the fingernail. (You also wonder if she means to cast the runes for laukr into the cup, or actual alliums.) Another charm reads laukR alu, combining the leek with the word alu, a word whose literal meaning is “ale” but which was a potent magical charm.

In addition to this, leeks had medicinal uses, to “revive and heal” (MacLeod and Mees: 102) so smearing leeks on a dead head or penis would seem a reasonable prelude to magicking it back to life. One of the characters in Volsa thattr observes, after the ritual has been performed:

You’re distended, Volsi, and pricked up.
Endowed by linen and supported by leeks.

The poem Voluspa makes the leek the first sign of green life, which begins to sprout after the sun shines for the first time. If it seems strange that it would be leeks and not grass that would be first to emerge, the vitality and fertility of leeks was probably in the poet’s mind.

The word laukr is inscribed on several bractates, little medallions worn as ornaments, usually along with images of men and horses. One also has a snake, underscoring the leek’s symbolism of virility and masculinity. Another features the linen and leek formula, while several others with repeated “l” runes may well be shorthand versions. (Lehmann:165) 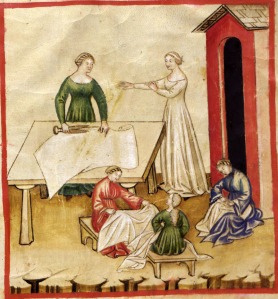 As for linen, later folklore has it that the goddess Holda taught the secret of making flax into linen cloth. It certainly is a long and difficult process, but the final fabric is very fine. You can see why it was (and is) prized. And since it comes from plant fibres and not animal hair it is unusual, which may be why it was linked to the leek in magic.

Flax was a benenfical plant, and no one could work evil magic in a field of flax. Women put flaxseeds in their shoes to attract good fortune, and people in Bohemia used to get their children to dance in the flax fields to make them beautiful. Swedish mothers used to spin three lengths of linen thread during pregnancy to use for protecting their newborns.

Linen mainly turns up in Eddic poetry in the context of marriage, bridal linens or linen sheets. Even when there isn’t a stated connection, the symbolism seems to linger in the poet’s mind. In Volundarkvida, we are told that swan-maidens sit down by a lake to spin linen. In the next verse they are married to Volund and his brothers, as if that was the inevitable next step. Unsurprisingly, Thrymskvida, in which Thor dresses up as Freyja to get his hammer back from a giant, features much banter about bridal linen. (Lehmann: 167)

So, unlike the aggressively phallic leek, flax or linen seem to have been associated with feminine magic, not surprising when you consider who was responsible for spinning and sewing.

Both leeks and linen are simple household items, so it’s no surprise that they turn up in the Volsa thattr story, dealing as it does with a simple house-cult. (Simek suggests that the leek and linen formula comes from medical texts, where leeks were used as antiseptics, and the linen would be the bandage.)

But then ale is also a simple product, like linen, transformed from nature to culture and so carrying its own magic. Leeks were raw nature, which might explain why they so often appear in sexual charms. So the linen and leek formula is an echo of the magic: the combination of a raw natural product and a highly wrought human artifact, which produce something supernatural.

PS – I mentioned this post to a fellow blogger, and she pointed out that it could be the perfect clickbait. Perhaps I should have titled this “You WILL be AMAZED! How to revive a god’s head or a horse’s penis with common household items.”

1. MacLeod and Mees suggest an alternative title: Tale of a Prick.↩

22 thoughts on “Mimir and Volsi: what were those herbs? ”