When you consider what Hercules did for Gaul, it’s no wonder that they loved him. He founded the city of Alesia, and introduced the rule of law. “And for the entire period from the days of Heracles this city remained free and was never sacked until our own time…”1 (Diodorus Siculus 4.19.1)

Other myths said that Hercules was the father of Celtos, Galatos and Iberus, the ancestors of the Celts, Galatians and Iberians. This would make him the ancestor of the French, Spanish and Anatolian Celts, who would thus become many-times-grand-children of Jupiter.

To honour their fore-father, they offered statuettes of him at shrines (especially the god Borvo’s), and many Gaulish gods, including Ogmios and Smertrios, were paired with him as part of interpretatio celtica. (MacKillop: 248)

His 10th labour, the rustling of Geryon’s cattle, has a very Celtic flavour to it. To the Celts, cattle were wealth, so it’s not surprising that they raided each other’s cattle whenever they could. The enormous difficulties that Hercules faces getting to the end of the world to steal Geryon’s cattle, then his efforts to keep others from stealing them, are a bit like the Irish story of the Brown Bull of Cooley (the Tain bo Cuilange). At the end of the Tain, the bull dies, and in this story the cattle are all sacrificed to Hera when Hercules finally gets them home.

Another Celtic motif is that, after he killed Geryon, Hercules founded a city on the spot of their battle, and buried Geryon’s head under it. (The head of the Welsh wise-man and warrior Bran is supposedly buried under the Tower of London.)

In addition, he built the Pillars of Hercules, one in Spain and one in Libya, to commemorate his journey. According to legend, the Spanish king Breogán built a tower at the site of the pillar, so tall his sons could see Ireland from the top, sparking yet another of Ireland’s mythical invasions.

Tower of Hercules, with king Breogán in front, in Spain. From Wikimedia.

Hercules’ appeal was similar to that of the Norse god Thor. Both were claimed as a divine ancestor by important families. Their followers wore their god’s weapon as an amulet: Thor’s hammer, which seems to have been a counter to the Christian cross, and Hercules’ club, which spread across the Roman empire from Britain to Palestine in the 2nd and 3rd centuries.

They were the gods who kept monstrous, chaotic forces at bay, which is sometimes hard to reconcile with their occasionally buffoonish behaviour. Some see the two gods as part of an Indo-European type of hero god who kills the dragon/serpent and thus restores order to the world.

On a less cosmic level, Hercules was a special patron of athletes, gladiators, and soldiers, so perhaps it’s not surprising that the Roman army, followed by Roman entertainment, carried him across the Empire.2 Every culture has need of protectors and warriors, who will defend those who cannot defend themselves, so it’s no surprise that the Celts had their own versions of the strong man with a club.

Still, it’s hard to think of a more unlikely fusion of Celtic and Graeco-Roman gods than Hercules and the Gaulish Ogmios. The Greek writer Lucian described an image of Ogmios that showed him as an old man with a blackened face, dressed as Hercules but hardly heroic in physique. Instead, he drew many followers behind him by chains attached to his tongue. (It’s a lengthy passage, so I won’t quote it here.)

The point was that to the Celts eloquence was the greatest strength. Partly because of this, writers have always liked the Gaulish Ogmios to the Irish god Ogma, inventor of the ogham alphabet, warrior and champion. While Ogma was known as grianainech, sunny-face, and Lucian describes a smiling god, he seems to have had an underworld side as well.

Ogmios was also invoked on two defixiones, lead curse-tablets. In one a woman asks Ogmios to take her rival in love. Another, now lost, mentions Dis Pater and his consort Aeracura as well as Ogmios. These curse-tablets turn up in many temples, but the sun-goddesses Sulis and Bricta also had them at their sanctuaries; perhaps the all-seeing sun could punish wrongdoers?

The god Smertrios. From the Boatmen’s Pillar in Paris. Wikimedia.

The name Smertrios is related to the name of the goddess Rosmerta, and both have to do with provision, in the sense of forethought, and abundance. The only image of him comes from a pillar dedicated by Parisian boatmen in the 1st century CE, and seems to show a Hercules-type god, brandishing a club and destroying a serpent.

The image is in fragments, with the bottom half of Smertrios’ image missing, along with part of his name. This was reconstructed as Smert[rios], the part in brackets being the missing bit,  from an inscription to Marti Smertrio found in the land of the Terveri, a German Celtic tribe.

(Among the Treveri he was the consort of Ancamna, also mentioned in the inscription.) Another inscription from Austria calls him simply D]iti Smer[trio], the god Smertrios, while Smertullus may be a variant. (Gauls liked to name themselves for him: personal names beginning with Smert- were popular.) (Haeussler: 34)

So Smertrios may simply have been a similar god to Hercules, rather than identified directly with him. Still, an inscription from northern Italy to Hercules Mertronnus (note “mert” element) is probably another version of heroic, foresightful god who provides. (Duval: 297)

I mentioned in the introduction that the Celts offered statuettes of Hercules at his shrine at Aix-le-Bains. This has puzzled scholars, since Borvo seems to be part of the “Celtic Apollo” group of gods, all linked to healing water. (Borvo’s name means boiling or bubbling. An inscription from Bourbonne-les-Bains directly links him with Apollo.)

It may be that in that one place the interpretatio celtica went differently, with the locals seeing Borvo’s healing power as a feat of strength (Hercules) rather than skill (Apollo). Or, the statuettes may simply have represented victory over disease to those offering them, a sort of ex-voto.

Britain has 24 inscriptions to Hercules, most to the Graeco-Roman god. But, a couple blend him with local gods. One from Silchester (in Hampshire) is dedicated to Hercules Saegon.

This god is probably a form of the Gallic Segomo, whose name means Victor or Mighty One. As with Smertrios, Segomo was also associated with Mars, and the Sequani worshipped him as Mars Segomo. A bronze horse with the legend “Segomo” was found in Burgundy, part of their territory, and a statue of a mule dedicated to him comes from Neuvy-en-Sullias in west central France. (McKillop: 382)

Unlike Borvo, however, there is no contradiction between Hercules and Mars, both fighting gods. And, as Marian Green points out (188), Segomo is really more of a title than a name.

In Ireland, the name Nia Segamoin or Servant of Segomo suggest his cult may have reached all the way from central France to the Hibernian Celts. (MacKillop: 382)

This god, like Smertrios, had a wide following. Eleven dedications to him come from north-east Gaul, one from Mumrills in Scotland, and two temples at Elst and Empel in the Netherlands. A statue from the latter shows the god with the beard and lion skin of Hercules, holding up one hand that may once have grasped a club.

1. Since it was Julius Caesar who conquered Gaul, this was obviously intended as a flattering comparison between the general and the god.↩
2. Those modern strongmen, superheroes, have included Hercules in their ranks. DC and Marvel both have their versions, to stand beside Superman and Thor. And of course Shazam counts Hercules as one of the six whose powers he can draw on.↩ 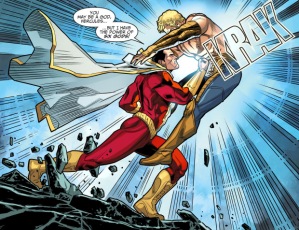 Ogmios:
Collection of sources on Ogmios and Ogma
Profile of Ogmios, including underworld aspect
Polytheist.com on Ogmios