Norse myth tends to echo; one story calling to another. There are at least three stories in Norse myth about a young man passing through a wall of flames and other hazards to reach a woman. This would seem to be a straightforward story of a woman sought and won, except that in two of these stories the young man is a stand-in for another, and only one story has a happy ending. 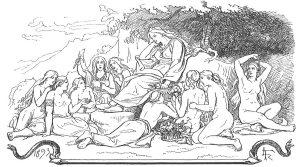 Menglod and her nine maidens, by Lorenz Frølich. Wikimedia.

Menglod’s story is the most straightforward of the three, as it begins and ends where we, who have been raised on fairytales, expect it to. As told in the Eddic poem Svipdigsmal, young man named Svipdag is cursed by his evil stepmother, to never marry unless to Menglod. We then learn that Menglod’s castle is far away and difficult of access, so Svidpag consults his dead mother, who blesses him with nine charms:

5. “Charms full good | then chant to me, mother,
And seek thy son to guard;
For death do I fear | on the way I shall fare,
And in years am I young, methinks.”

He then proceeds to the castle, where a surly gatekeeper outlines the conditions that must be met before Svipdag can enter. These are depressingly circular – he needs to complete the last task before he can accomplish the first – but then the keeper says that if his name was Svipdag (our hero is travelling under a false name) none of this would be necessary.

At this the hero reveals his true identity, and the wall of flames part, the doors open, and Menglod and her women rejoice:

66. “Alike we yearned; | I longed for thee,
And thou for my love hast longed;
But now henceforth | together we know
Our lives to the end we shall live.”

The Eddic poem ends with these lines, a variant of the happily-ever-after formula that we’re all so familiar with. It’s not ever explained, however, why Menglod was languishing around waiting for Svipdag to show up. She seems to be in the story just so that he can be sent on a quest. Perhaps she was cursed too, like Sleeping Beauty?

We’ll never know, because the story is focused on Svipdag, who is a remarkably passive hero – a curse sends him to seek Menglod, and even then he needs his Mom to help him do it. 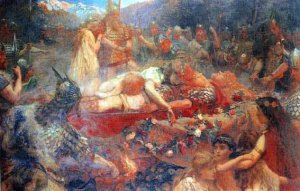 Although we know that Menglod is destined for Svipdag, and seems to be pleased about that, we don’t know who set up the fiery wall and fierce dogs that guard her from the outside world. In Brynhild’s case, we know: Odin did it to punish her. (The story is related in the Volsung Saga, and also in a series of Eddic poems, although it helps to read the saga, or a summary, first to understand them.)

Brynhild was a valkyrie who angered Odin by favouring a king he wanted for Valhalla. For this, Odin reduced her to a mere mortal, and imprisoned her in a remote castle on top of a mountain, surrounded by flames. There she had to stay until a mortal man rescued her.

When Sigurd breached the wall of flame, and lay with Brynhild (chastely, with a sword between them) Brynhild naturally thought she had found someone whose courage and will match hers. But Sigurd was already married to Gudrun, and he wooed her disguised as his brother-in-law, Gunnar.

Brynhild didn’t find out about this until she married Gunnar, and then only by accident. This discovery precipitates a series of tragic events. First, she incited her husband to kill Sigurd, then she killed herself as well. (Some versions of the story also include details of how much she despises Gunnar once she learns the truth about him.)

Her suicide returned her to her original, heroic, nature. The poem Helreith Brynhildar, a dialogue between Brynhild and a giantess, justifies her actions:

14. “Ever with grief | and all too long
Are men and women | born in the world;
But yet we shall live | our lives together,
Sigurth and I. | Sink down, Giantess!”

So they do end up together, or at least Brynhild expects to meet him in the afterlife. Which reverses things nicely, since now she is going forth to seek him. This fits with Brynhild’s nature, which is closer to the heroic ideal that also motivates Sigurd.

The Eddic poem Skirnirsmal also features a stand-in: the god Freyr, love-sick for the giantess Gerdr, sent his servant Skirnir to convince her to grant him her favours. However, as Carolyne Larrington puts it, Gerdr is like a Menglod who’s been reading maiden-king romances. Like those heroines, she was in no hurry to marry.

Indeed, once Skirnir made his way past a surly herdsman, and a wall of flame, he found that Gerdr was not minded to leave her father’s hall, and unimpressed by what Skirnir and his master can offer her:

22. “The ring I wish not, | though burned it was
Of old with Othin’s son;
In Gymir’s home | is no lack of gold
In the wealth my father wields.”

As well as Odin’s ring Draupnir, he offered her Idunn’s golden apples, which might not have been the wisest choice. Gerdr would no doubt remember another giantess, Skadi, whose father died at the hands of the Aesir, and whose marriage to Freyr’s father ended in divorce.

It’s only when Skirnir threatened her with a magical curse that she gave in, and then only reluctantly. (A parallel between Freyr and Svipdag is that others do all the magical work for them.) She mustered up a last spark of resistance, however, by making Freyr wait for nine nights before she’ll meet him.1

Clearly, Gerdr was comfortable in her own dwelling, with her own family, and wasn’t waiting around for some god or hero to turn up. And yet, most interpretations of the myth either offer a “nature-myth” reading: that the frozen earth must be warmed and fertilized by the sun and fertility god, or else the writer contorts the story to somehow make Freyr out to be a “good god” who wouldn’t really force a woman to sleep with him.

My main objection to the first one is that no one ever asks the earth if she wants to be fertilized, or even if she has a preference for one “sun-ray” over another. She just lies there and takes it, I guess, since the ground can’t get up and walk away. (John Hnefnell Adalsteinsson has suggested that her disdain for Freyr may echo Freyja’s horror in Thrymskvida at the idea of marrying a giant.)

As for the second objection, the only real difference between Odin and Freyr is that Odin does his own dirty work, while Freyr makes his servant do it for him. The coercion in Skirnirsmal does fit rather oddly with Tyr’s assertion in Lokasenna that “He harms not maids | nor the wives of men” (37), but I suppose you could argue that Gerdr did consent – eventually.

The poem as a whole, however, upends the whole idea of woman-as-reward by having the woman in question reject the whole idea. Gerdr makes it clear that she is no prize, and certainly not sitting around waiting for a rescuer.

Both Menglod and Brynhild have to sit around waiting for a man to rescue them, but while Menglod seems to get the happy ending we associate with these stories, Brynhild’s story turns to tragedy because of Sigurd’s betrayal. Gerd on the other hand, simply refuses to play. She doesn’t need a man, and she certainly doesn’t need a rescuer. (The “rescuer” is exposed when he quickly turns from noble speech to threats and curses.)

Just as Skadi’s story upends the bridal-quest genre by making the quester a woman, and the marriage a comical failure, Gerd’s story presents us with a hero who breaches the fortress only to discover that Sleeping Beauty isn’t interested. Perhaps making a giantess the heroine of the story opens the door to these sorts of inversions.

1. The nine nights may be another reference to Njord and Skadi, who spent nine nights in each other’s home, only to discover that each hated the other’s residence.↩

The image at the top is of Hilary Swank with an Oscar, which she won, and was not about to hand to someone else.

6 thoughts on “Through the Fiery Wall: Menglod, Brynhild, and Gerdr”