This may be a little hard to imagine, but Snorri Sturluson mentions it twice in the Gylfaginning section of the Prose Edda, once when he is describing the goddess, and later when he tells how the deities came to Baldr’s funeral:

Sessrumir, her hall, is large and beautiful. And when she travels, she drives two cats and sits in a chariot. (Faulkes: 24)

…Freyr drove in a chariot with a boar called Gullinbursti or Slidrugtanni. But Heimdall rode a horse called Gulltopp, and Freyia her cats. (Faulkes: 50)

Later, in the Skaldskaparmal section, Snorri tells us:

How shall Freyja be referred to? By calling her daughter of Niord, sister of Freyr, wife of Od, mother of Hnoss, possessor of the fallen slain and of Sessrumir and tom-cats… (Faulkes: 86)

The word for tom-cat, fress, caused a bit of controversy in the 19th century, as you will see below.

Why don’t the cats have names?

You will have noticed that in the second quote, Freyr’s boar and Heimdall’s horse have names, but Freyja’s cats don’t. So either 1) the cats never had names, which seems unlikely given the number of things that do have names in Norse myth (right down to the squirrel that runs up and down the world-tree) or 2) Snorri Sturluson didn’t know them. Which means that we don’t know them either.

Modern pagans have not let that stop them, and they can choose from two solutions to the problem. The first comes from the writer Diana Paxson, whose ingenious solution appeared in her fantasy novel Brisingamen:

Freyja is associated… with the cat (the lore does not give us the names of the cats who draw her cart– in Brisingamen I assigned them the names “Tregul” (Tree-gold, or Amber) and “Bygul” (Bee-gold, or Honey)… (Paxson)

Some people like to give them the names of her daughters, Hnoss and Gersemi (both names meaning “treasure”). (Amy Sey)

The second solution has the advantage of coming straight from the lore, although it does seem to suggest that Freyja’s cats and daughters are interchangeable, which I’m sure was not the idea.

How can cats pull a chariot?

Freyja riding with her cats. Wikimedia.

Artists have always struggled with Freyja’s cats. (Although a chariot drawn by two goats (Thor) or a boar (Freyr) also seems unlikely.) The problem is, we know how big cats are, and how likely anyone is to harness them. If you check out the picture gallery I linked to in the first sentence, you’ll notice how the cats are always much larger than ordinary cats, like the ones in the picture above.

While artists often used a bit of license to simply make cats large enough not to look ridiculous, there have been other solutions to this problem: 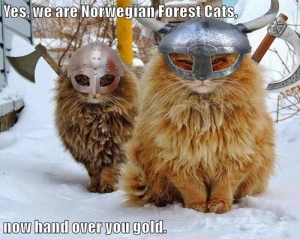 To be entirely accurate, Freyja’s cats would have been the ancestors of this breed, black and white cats brought by Viking seafarers from Britain to Norway, longhairs brought back by Crusaders and traders in the Middle East, and local cats on farms. The skogkatt which resulted from this mix lived on farms, with excursions as ships’ cats thanks to their prowess as mousers.

Forest cats are large, and powerfully built, for cats. Allowing for a little artistic license, they would be appropriate cats for Freyja’s chariot.

A Chariot drawn by lions: Freyja and Cybele

So skogkatts, being bigger than normal cats, are one solution. Another is to think even bigger: lions. The Near Eastern goddess Cybele had two lions to draw her chariot, which may have suggested Freyja’s cats as travel and trade brought cultures into contact.

Bronze statuette of Cybele on a cart drawn by lions

Cybele probably descends from an earlier goddess, the Hittite and Hurrian goddess Kubaba. The Hittite king Hattusilus considered her his patron deity, and with the royal boost her cult grew, untiil she was takng on the attributes of the mother-goddess Hebat and the Sun-Goddess of Arinna, including their lions.

Some have traced this imagery back to the Potnia Theron, or Mistress of the Beasts, a figure from prehistoric religion. She is usually shown as standing between two animals, often grasping them, although one from Çatalhöyük (in Turkey) shows her enthroned with two large felines flanking her.

She was the Great Mother goddess of the peoples of Phrygia, now western Turkey, The lions were her cult animal, either pulling her chariot, or crouching beside her throne. One image on Theoi.com shows her riding one.

This may or may not be related to Freyja, but it’s tempting to imagine the figure of the Great Goddess slowly moving north, taking her two giant cats with her. (Gustav Neckel connected the two in the early 20th century.)

Lions, or Martins, or Bears? Oh my.

Bears, you may remember, were the third option for Freyja’s transport. This is due to a nineteenth-century controversy over the Old Icelandic word fress. Skaldskaparmal says that Freyja could be called “possessor of tom-cats”, but the word for “tom-cat”, fress, could also mean a bear. This led to a dispute over whether Freyja travelled with bears or cats, but it resolved itself in favour of the cats.

The word köttr, used in the other two mentions of Freyja’s cats, could also mean a martin or weasel. Just to make it more confusing. Unlike bears, you can actualy see this one, since they’re all about the same size, and if cats were mainly feral or only semi-domesticated, it’s easy to see how the word became a catch-all term for agile medium-sized animals with fur.

Bears may be larger and more fitting animals for a Nordic deity, but the cat seemed more appropriate for a goddess who combined the Venusian and the witchy. At any rate, modern commentators on Norse myth seem to have settled that they’re cats, at least until proved otherwise.1

Did Thor give her the cats?

So we can consider it as settled that Freyja had cats to draw her chariot, however hard that may be to imagine. But the sources are as silent about how she got them as what their names were. If you poke around the net, however, you will see that some pages, mainly cat-themed ones, say that Thor gave them to her.

This seemed unlikely, but I decided to check into it. The source seems to be a book called Tiivistelma, which mixes the story of how Thor fished up the Midgard Serpent with the Russian story of the Cat Bayun, who lies in wait for travellers and sings them to sleep before robbing them. He tricks Thor into taking his kittens off his hands and Thor then gives them to Freyja. 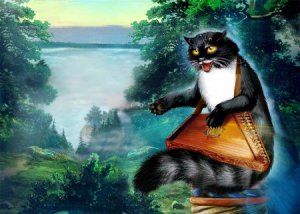 The Cat Bayun appears in Russian folktales, but not in Norse myths, and it seems that the author, John Halsted, made up this tale.

1. It is easier to imagine Skadi with bears or martins as her animals, although she’s usually associated with wolves.↩

The image at the top can be found here.