In the Irish myths a mysterious phrase crops up: the gods and the non-gods (or un-gods). We all know what a god is, but what is an non-god?

The phrase turns up in the Tain, when the Morrigan tricks the hero Cúchulainn into healing her after he beat her badly in combat. She disguises herself as an old woman with a cow, so that he will bless her and allow her to heal:

Cuchulain, maddened with thirst, begged her for a milking. She gave him a milking of one of the teats. “May this be a cure in time for me, old crone,” quoth Cuchulain, and one of the queen’s eyes became whole thereby. He begged the milking of another teat. She milked the cow’s second teat and gave it to him and he said, “May she straightway be sound that gave it.” [Then her head was healed so that it was whole.] He begged a third drink of the hag. She gave him the milking of the teat. “A blessing on thee of gods and of non-gods, O woman!” [And her leg was made whole thereby.] Now these were their gods, the mighty folk: and these were their non-gods, the folk of husbandry. And the queen was healed forthwith.

The phrase “gods and non-gods” seems to echo the social division between the áes dána, people of skill, such as lawyers, poets and blacksmiths, and áes trebtha, the people who worked the land.1 However, the division between the two was probably more complicated than that. 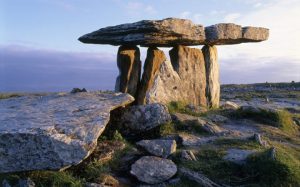 The Tuatha and the Rest

The Tuatha De fit well into this distinction, as any one that you can name has some stand-out skill or talent. Brigit, daughter of the Dagda, has three: smith, poet and healer, while Lugh, the star of the Tuatha, was called Samildánach, Skilled in Many Arts. Their very name, Tuatha de Danann, probably should be translated “People of Skill” rather than “People of Danu”. But who were the others, and where did they come from?

Mark Williams suggests that the separation of the gods was not part of Irish paganism. He sees it as coming from the filid, or poets, who retrofitted their social values onto the Irish gods: to have a skill (especially poetry) is to be godlike, “from where the statement then comes that some gods were not gods at all”. (203)

Others have been more willing to speculate on who was or was not andee. MacLeod’s paper on Flidais suggests that she was one of the andee, while Brigit and Lugh were áes dana. (Flidais’ ability to milk cows like deer, and her giving feasts like a brigiu, suggests the áes trebtha.) Rankin reviews suggestions that they were 1) humans, 2) demons, 3) divine kings and priests (or alternatively, semi-divine heroes) or 4) part of a formula designed to include all deities who might be listening, in the manner of the Greeks.

Apart from the Tain, there are four other references to the andee in Irish literature. As you will see, none of them explain who the andee were, but two of them do give some information about them and their relation to the Tuatha.

The Lebor Gabala, or the Book of Invasions, is a mythical history of Ireland, in which the Tuatha Dé invaded Ireland from the west and fought the Fir Bolg for possession of the island. It only mentions the andee once:

§56. They demanded battle of kingship of the Fir Bolg. A battle was fought between them, to wit the first battle of Mag Tuired, in which a hundred thousand of the Fir Bolg fell. Thereafter they [the TDD] took the kingship of Ireland. Those are the Tuatha Dea – gods were their men of arts, non-gods their husbandmen. They knew the incantations of druids, and charioteers, and trappers, and cupbearers.

This source implies that the both kinds of gods were part of the Tuatha, with a division between the ones with certain skills, and the rest. Another source, the Tuatha De Miscellany, repeats this:

(If you follow the link, you’ll notice that it’s a summary of Prof. Carey’s translation, which is very hard to get hold of. I’m still working on it.)

The Tale of Tuan mac Cairill describes an earlier fight, between the Partholons and an invading people from Greece, led by Nemed and his sons, including Iarbonel. His son was Beothach, who was credited in some legends as the ancestor of the Tuatha de Danann (and the Andee, apparently):

And at the end I saw that the victory was with Iarbonel. And from his people the Tuatha Dé and the Andé came, although their origin is forgotten, and learned people, because of their excellent wisdom and intelligence, say that they came from heaven.

This source sees the two as separate groups, but traces them back to a common ancestor. Finally, the andee appear in a praise poem to Aed, king of Leinster:

6. The lordship, this is his heritage, every good to him of gods or ungods:
the scion of a family without reproach, of the handsome kings of Marg.

The poem stands out a little, since all the other sources are passing on mythological knowledge, while this is a poem strictly about King Aed and his virtues. However, the blessing of the andee was something worth having, since a poet hired to praise a king would hardly offer him the blessing of demons or beings with no power. 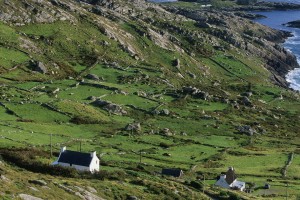 The fact that the andee turn up only in a formula doesn’t give us any clue to how the Irish viewed them, or interacted with them. The Gaulish andedion, however, turn up in two curse tablets, one from Chamalières and one from Larzac. The first seems to involve a group of men working magic, and invokes the god Maponus as well as the underworld gods.

I beseech the very divine, the divine Maponus Avernatis, with this magic tablet: quicken us, by the means of the underworld spirits.

The rest of the incantation can be found here, and the picture above it (or here at Wikipedia) gives you some idea of the difficulties Pierre-Yves Lambert found in deciphering it. Just to give you some idea, another translation has:

The other curse tablet, from Larzac, is strictly female magic. It is mainly a list of women’s names, although the rest is hard to decipher. The phrase brixta anderon should means something like “underworld magic”, and another phrase refers to women’s magic.2

Identifying them as “underworld” deities is based on linguistics, where dedio would mean “deity” and ande “below, beneath”. (The opposite would be uxedios, deities of above.) So far from being non-gods, the andedion would be similar to the chthonic deities of Graeco-Roman culture.

Even for the Greeks, the dividing line between chthonic (from a word for “earth”) and olympian deities wasn’t always clear. Persephone and Hades were chthonic, while Demeter was counted among the Olympians. Hermes and Zeus received the chthonic sacrifices (dark animals, at night) and so did the divine heroes Asklepios and Heracles. (Theoi.com has a page each for the underworld deities and the agricultural ones; both could be counted as chthonoi.)

If we assume that the andedion and the Irish andee were similar sorts of deities, then the andee must have been chthonic deities as well, perhaps ones who controlled agriculture as well as death, the underworld and dark magics. Will Parker makes that argument in an appendix to his translation of the Mabinogi (pdf here) and connects them to Welsh myth as well.

To go back to Rankin’s paper, it was a common practice among the Romans not to name the infernal gods for fear of calling them, which might explain the lack of names for the andee and andedion. (Just as the Greeks tried to avoid naming the underworld god Hades, calling him Hidden, Aidoneus, Polydectes, Receiver of Many, or Eubulus, Giver of Good Counsel.)

You could, of course, opt for Mark Williams’ answer to the question of the andee: that they were invented by Irish poets who wished to associate their skill with that of the gods. To continue in this sceptical strain, we could also argue that the andedion were a product of Romanization: a Gaulish version of the infernal gods of the Classical world.

It does, however, answer a question that has nagged at me for a long time: where are the gods and goddesses of death and the underworld in Celtic mythologies? The answer, presumably, is among the andee and andedion.

PS – Some also argue that early Indian myth had its own version of the andee: the adevas. This is based on two verses of the Rig Veda, which both use the word, which is found nowehere else. (8.85.9 and 6.22.11) I am not qualified to comment, but Rankin does discuss the andee/adeva connection. Follow this link to the Hindu Stack Exchange for a discussion of devas and asuras.

1. Other translations have “magicians” instead of “mighty folk”. The Irish is áes cumachta, which I would translate as “powerful people”.↩
2. The incantation mentions a goddess Adsagsona, possibly another goddess of magic like the Gaulish Bricta, whose name means “magic, curse”.↩

16 thoughts on “Andee: the non-gods of Ireland”