This post had its genesis in a question on reddit/mythology, encouraging other redditors to share their favourite myths from their home countries. I’ve always loved the fact that Wolverine made my world, especially if you look at it from an airplane, where the scars left by the retreating glaciers at the end of the Ice Age do make you think of claw marks.

Wolverine made the world, but who mistook his own ass for caribou jerky. Coyote is the trickster out west, but among the East Coast Innu the wolverine took that role. Wolverine could also be a bully, which fits with the ferocious nature of the animal, who will fight bears 10 times their size.

Some of you may have been hoping for a post about this guy. Although Logan is a fascinating hero (and Canadian!) I’m more interested in the animal and its mythology and folklore.*

The name wolverine is a diminutive form of the word wolf. (A wolverine might be smaller than a wolf, but as this YouTube clip shows, they’re more than a match for them.) They’re actually members of the weasel family, weighing 12 to 18 kilos (females are a little smaller), with semi-retractable claws for climbing, fighting and scaring off enemies.

According to Canadian Geographic:

The small wolverine will even scare bears away and steal their food instead of going to get their own meal. When they hunt, they climb trees or tall rocks and boulders from which they jump onto their prey’s backs. If the wolverine can’t finish all the food, it sprays it with musk, like a skunk, and buries it for later.

They have dark brown fur with lighter stripes down each side, and chest markings which can be used to tell individuals apart. They scavenge moose and caribou, but also hunt a variety of smaller game such as beavers, hares and voles. Their powerful jaws allow them to crush bones and frozen carcasses, a useful thing in the Canadian winter. They are hardy animals, living in the Arctic regions of Canada, as well as Alaska, Greenland and northern Russia.

They live in dens, and tend to avoid human habitats. They’ve been moving north as the human population grows, and they’ve suffered the usual loss of habitat that goes with logging, roads and mining as well as encroaching towns and cities. Unfortunately they have smaller litters than weasels and other members of their family, which doesn’t help.

It is the Innu of Quebec and Labrador who say that Wolverine made the world. (The Innu, by the way, are not the same as the Inuit. To put it in old-fashioned terms, the Innu are Indians, and the Inuit are Eskimos. The Innu moved between coast and inland depending on the season, while the Inuit tend to stick to the coastline.) Older books and articles call the Innu Nascopie or Montagnais.

The Innu name for wolverine is Kuekuatsheu, and the French borrowed from them for their name. carcajou. While the Innu saw Wolverine as a Coyote-like trickster who often outsmarts himself, they also say that he made the world we now live in.

The story is a somewhat ruder version of the earth-diver myth you encounter in many First Nations mythologies: there were great floods, and soon all the earth was covered in water. Wolverine said to himself that if this continued, he wouldn’t be able to travel around, or even keep dry. So he went to the animals that live in water, and asked them to bring up some ground to stand on.

The Otter and the Beaver dove, but found nothing. Then the Muskrat said it would try, if Wolverine tied a thong to its leg. Muskrat dove into the water, and was gone for a very long time. Finally Wolverine got worried, and pulled up the thong. Only Muskrat wasn’t on the end of it. Wolverine thought that’s it, no more earth, but Muskrat suddenly burst to the surface, his mouth so full of dirt he couldn’t talk. So Wolverine blew into his ass and all the dirt flew out of Muskrat’s mouth, heaps and heaps of it.

Another Innu story tells how Wolverine was tougher than winter. One winter it was mild and slushy, and Wolverine complained to Tciwetinowinu that winters were no good anymore. Tciwetinowinu said he would have to do better next time, and so after a very warm summer and fall, he sent one of the coldest winters ever. He visited Wolverine to ask if this was better, but Wolverine wouldn’t admit he was freezing, so Tciwetinowinu decided to try harder.

He doubled down; the next day was so cold Wolverine’s urine froze in mid-air, and branches were snapping off the trees. Wolverine knew Tciwetinowinu would be by, so he started pouring grease on his fire. When Tciwetinowinu came to see how Wolverine was faring, the heat was enormous, but Wolverine kept him there, talking about all the gossip from that year, until Tciwetinowinu began to melt. Finally Tciwetinowinu admitted defeat; he had to, or melt away to nothing. And since then, winters have been not too hot, not too cold, but just right.1 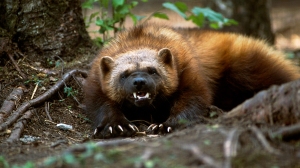 The Maliseet of Quebec, New Brunswick and Maine also tell stories about Wolverine. They call him Lox, and most of the stories about him are not flattering. He comes across as more anti-social than the Innu version, and more dangerous.

One story tells how he wanted to kill the Bear, but would not take him on directly. So he sat down one day at the lakeside, and told the Bear that the birds were so beautiful because they were white, and he, Lox, had made them white. Bear wanted to be white too, so Lox agreed to change his colour as well.

Lox built a strong hut, and filled it with red-hot stones. He sent Bear in, and poured water on the stones. The Bear, Mouin, got very hot and demanded to be let out. Lox pointed to white spots on Mouin’s breast, and said that he would be white all over if he stayed in the hut. So Mouin went back in, and Lox closed everything up tight. Soon Mouin wanted out again, but Lox waited until there was no more noise – and Mouin was dead. 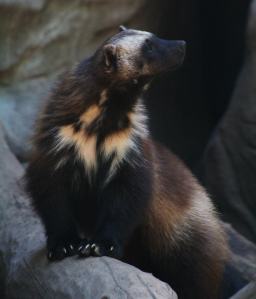 The Dene, also known as the Athabaskan peoples, are a group of peoples living in a large area stretching across central and north-western Canada. They are related to the Apache and Navaho peoples further south.

One Dene story explains why wolverines steal food form caches, and raid traps. When Wolverine was a man, he was an unsavoury character who tried to poison his mother-in-law, and refused to share food with her. But her sons planned a revenge, and they killed Wolverine, clubbing him to death. (But first they play a prank on him by telling him that he has to raise his breechcloth and spread his legs before they will give him food. He does, and they burn his butt with hot fat on a stick.)

Then they kill Wolverine’s wife (yes, their sister) and his son, and try to kill her unborn babies, the wolverines. But the wolverines run up a tree and defeat all the brothers’ attempts to burn them out. They try to make a deal with the brothers, that they will leave their traplines and food caches alone as a peace gesture, but the brothers try to kill them again, and so ever since wolverines have raided caches, bait and traps.

In another story, Wolverine stole two human children and raised them as his own. He kept them in a tree, in a cache, with his food in another cache hanging below. He had all sorts of food in his cache, but he only fed the children fat. They got sick of this, and began to watch where Wolverine went. Soon they were following him, all the way to his food cache. When they found this, they took a small amount of meat for themselves, and ate it. But Wolverine saw that the meat was gone, and was angry. He would have killed them, but they knew all his ways and he couldn’t.

There are many more stories about this fierce and wily creature, and I would encourage you to explore the links and books below. First Nations mythologies are a rich storehouse of tales, and a change from European mythologies.

1. Although some Labradorians might dispute this, especially in March and April when it’s still cold and snowy. ↩