The Roman Empire was never shy about adopting deities from other lands. Isis, Mithra, Cybele all became wildly popular, perhaps because their cults were different from the staid Roman deities. All three of these cults came to Rome, but others had the Romans come to them.

The Gaulish goddess Epona got a place in the Roman calendar after they invaded Gaul, and soon after the Romans started garrisoning the stretch that would become Hadrian’s Wall in Britain, they adopted the local warrior gods for their own. We know Cocidius and another god, Belatucadros, were worshipped by the soldiers as well as the locals, which seems strange to us but was normal practice to the Romans.

In polytheistic Rome absorbing foreign deities was a normal part of life. (And sometimes strategic – they were not above making offerings to enemy deities as a way of getting them to favour their side.) Tribunes and several legions dedicated altars to Cocidius, so it wasn’t just individual soldiers worshipping the god:

To the holy god Mars Cocidius Vibenius Lucius, beneficiarius of the governor, willingly and deservedly fulfilled his vow.
(RIB 602)

To the god Cocidius the soldiers of the Twentieth Legion Valeria Victrix willingly and deservedly fulfilled their vow in the consulship of Apr… and Ruf… .
(RIB 1596)

The Romans might seem impressively broad-minded, but in many cases they dealt with foreign gods by assuming that they were the same as their own. Confronted with a strong young god who protected his people and was associated with trees, the answer was a simple one: Cocidius became either Mars Cocidius or Silvanus Cocidius.1

Cocidius could be described as a god of Hadrian’s Wall; his cult extends from one end to the other, although it centres on Bewcastle, a parish of the City of Carlisle. The Roman Inscriptions of Britian database lists 23 altars dedicated to him (and two silver plaques). In 1980 archaeologists excavated a shrine to him at Yardhope. (At the Otterburn Training Centre in Northumberland, appropriately for a war-god.)

The little shrine sat on the south side of a valley, high enough to give a good view over the terrain, and catch whatever sun was available. A fault in the bed-rock of a gully made a little chamber, with its entrance on the east. A niche just outside the entrance holds an image of the god:

Facing east, this warrior stands with his feet slightly apart and his arms outstretched.In his right hand he holds a spear, in his left he brandishes the reverse of a small, round shield. Apart from what appears to be a close-fitting cap or helmet, pulled low over his jutting brows, he is completely naked but non-phallic.
(Charlton and Mitcheson: 143)

Inside the shrine was fitted with a bench and a hearth, although the archaeologists note that it was too small to live in. While such shrines were unusual for the Celts, who tended to worship outdoors and made no images until contact with the Romans, there are others, such as a shrine on Scargill Moor near Bowes, dedicated to Vinotonus Silvanus.

You may have noticed, by the way, that the Yardhope god did not come labeled, so how do we know it’s Cocidius? Really, we don’t know for sure. It represents the archaeologists’ best guess, seeing that the other “most likely”, Belatucadros, is found only in western Britain.

Also, two silver plaques dedicated to Cocidius (from Bewcastle) show him in the same pose, with the same weapons. (RIB 986 and 987) These were found in the saecellum of the fort principia, and as you can see below, one of them is helpfully inscribed Deo Cocidio. 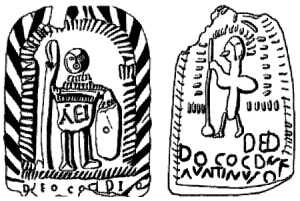 A sketch of the silver plaques. Wikimedia commons.

It may be that this pose was associated with him, in the same way that sitting cross-legged was with Cernunnos. (There are other figures in a similar pose, but unidentified, like the one at a farm called the Heads, near Risingham, and a figured discovered in 2006 near Chesters Fort on Hadrian’s Wall.)

I mentioned Bewcastle above as a centre of the Cocidius cult, and E. Birley suggested Bewcastle as the Fanum Cocidi, or Shrine of Cocidius, listed on the Ravenna Cosmography along with the western forts. Of the nine altars found there, six were dedicated to Cocidius, making it the best candidate.

Silvanus, alders and the red god

I’ve mentioned several different altars and other items with Cocidius-as-Mars depicted on them, but there are also a number of images linking him with Silvanus, the god of forests and the wild.

The archaeologist Ian RIchmond found one from the Risingham fort in the jamb of a garage. When he persuaded the farmer to take it out, he saw a dedication to Silvanus Cocidus (Webster: 75), along with a relief of the god with a dog and stag on one side, a tree and doe on the other. (RIB 1207)

The figure of Rob of Risingham, as he became known, may well be another. It was a Roman-era carving of a man holding a bow in one hand and a small animal, perhaps a hare, in the other. The novelist Walter Scott described how the landowner tried to destroy it because it attracted too many visitors, but the Reesdale Society erected a replica in 1983.

Along with the images of Cocidius as the forest god, we have altars dedicated to Silvanus Cocidius. One found at Housesteads reads:

To the god Silvanus Cocidius Quintus Florius Maternus, prefect of the First Cohort of Tungrians, willingly and deservedly fulfilled his vow. (RIB 1578)

The Tunrgians were Belgians or Dutch, who served in the Roman army as a distinct unit.

Silvanus seems to have been a patron of hunters, and a number of Celtic gods were associated with him. With Cocidius it may have been in part because of an altar (RIB 1102) dedicated to Vernostonus Cocidius. The name Vernostonus can come from the word for “marsh” or else “alder”. Scholars generally prefer the “alder” interpretation because it ties in with Cocldius’ link to the forest-god Silvanus.

Alder might be preferable for another reason. Alders, especially black alders, “bleed” when cut, turning the wood from white to red. This seems appropriate for a warrior god, whose own name is “The Red”, from British Celtic cocco-, “red”.

The colour red is an auspicious or significant one in many cultures. In Ireland and Scotland red wool was included in healing charms, while black, white and red together (or two of them in a pair) could indicate the otherworld.

Red could also connect to Codidius’ warrior side; he and another red god, the Gaulish Rudiobus, took the title Mars. The Irish god the Dagda had the by-name Ruad Rofhessa, the Red One of Great Wisdom, as well as Dagdai deirg, the red Dagda. (Dearg is the modern Irish word for red, too, which seems to be an intensifier when used colloquially.)

1. The Romans never developed any systemized way of pigeonholing deities, which is why Cocidius was both Mars and Silvanus, and Brigantia could be a nymph, or Victoria, or Caelestis.↩

References and Links
Charlton, Beryl and Margaret Mitcheson 1983: “Yardhope: A Shrine to Cocidius?” Britannia 14: 143-53. (JSTOR: paywall) or read more about the shrine.)

The Wikipedia entry
Cocidius in the Roman Inscriptions of Britain database
Another possible Cocidus image
Fanum Cocidi in the Ravenna Cosmography (archived, may be slow to load)
Cocidius: God of the North
Roman intaglio gem of British deity Cocidus as Silvanus the Hunter, 2nd century BC.
Rob of Risingham
Why Alder is the Tree of Death
Alder Mythology and Folklore
The Alder Tree