When I started reading comics again, I started with the New 52, because I knew who the characters were, and I figured a reboot meant that newbies like me would find it less confusing to follow.  I had also liked a lot of Marvel lines: Daredevil, the Avengers, Spider-Woman and Moon Knight. I’m still trying to decide how I feel about Spider-Woman, but Moon Knight is great.

Although he is often dismissed as Batman with multiple-personality disorder, Moon Knight is actually a complex and interesting character unto himself. They do have their similarities. 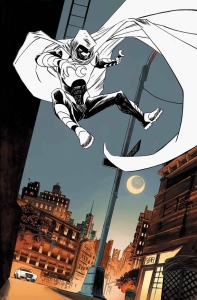 As an article in USA Today put it:

I see Moon Knight as having as much in common with Hawkman as with Batman. Think about it: both have ties to ancient Egypt, both have issues with violence, and both have other people in their heads, Hawkman as a series of reincarnations, MK all at once as multiple personalities.

A difference between the two is in their mythologies: Hawkman is obviously modelled on the god-king Horus as the young warrior god with solar associations, while MK gets his powers from Khonsu, the moon-god.

Saved by a God

The story goes that mercenary Marc Spector had a near-death experience in Egypt during which the god appeared to him, and Spector decided to take up crime-fighting as a path to redemption. As the splash page puts it: “He went completely insane, and disappeared. This is what happened next.”

His tie to the moon-god is brought out strongly in the new series: MK often mentions his role as protector of those who travel at night (Khonsu means “traveller” or “he who fares through (the heavens)”, he has discussions with the god (another title of Khonsu’s: “he who gives advice”), and, when things get really weird in #3, with a ghost attack, Khonsu takes over and yes, punches ghosts.

As you might expect from a hero powered by the moon-god, Moon Knight’s various costumes are white. As are his throwing crescents. Artists have used this to great effect – he really pops against a black background, and this visibility gives him a strongly graphic look that harks back to early comics, and poster design, where large areas of one colour are used to focus attention and convey emotion. The artist often leaves the white spaces of MK as undefined, negative space, like in Japanese art.

They see me coming

Also, as MK himself put it (quote from 8 Essential Facts About Marvel’s Mentally Unstable Hero):

…I don’t wear white to hide myself, I wear it so they’ll see me coming. So they know who it is, ’cause when they see white it doesn’t matter how good a target I am. Their hands shake so bad, they couldn’t hit the moon. (Moon Knight Vol. 4, #1)

The art in the new comics is amazing – I bought the first issue because I liked the cover so much.

Then the story sucked me in. The twist is that Spector doesn’t have multiple personality disorder – the god Khonsu has four aspects, and so Spector adopts different personas matching the four aspects, according to need.

The new MK isn’t all that different from the old one in some ways – he still has a lot of cool equipment, including the Moon-copter in #3. He still fights evil, and he is still morally ambivalent (he will kill bad guys if he has to).

What’s new is that he engages more with the consequences of his actions in his former life, and, in an interesting development, his psychiatrist hijacks his attachment to Khonsu so she can take revenge on the warlord who killed her family. Will Spector get his powers back? And what will this do to his head?

1 thought on “Moon Knight: sometimes you want to stand out.”