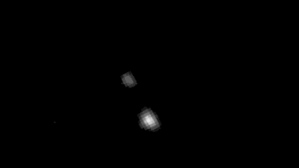 Very fuzzy picture of Pluto and its moon, Charon.

The first images of Pluto and Charon from the New Horizons spacecraft were released Wednesday. Not coincidentally, Wednesday would have been Clyde Tombaugh‘s 100th birthday, and Tombaugh was the astronomer who first found Pluto.

Admittedly, these pictures are pretty fuzzy, but they’re really a rehearsal for July, when New Horizons will be much nearer the former ninth planet and will be able to get much better pictures. These first images were just to make sure that the spacecraft was pointed the right way.

It’s tempting here to make a joke about the Hubble, which ended up wandering blindly, but it did send back pictures of Pluto and its moons, such as the following:

Pluto and its moons, courtesy of the Hubble Spacecraft.

There are two cool things about this, first the fact that we have these pictures at all, and second that Pluto’s moons are apparently nested in their orbits like Russian dolls, which is very tidy-minded of them.

Pluto may be a demoted planet, but for all Scorpios and astronomy fans like myself, it still has a place in our hearts. Clearly there are a few of us, to judge by the fact that there’s a t-shirt available which proudly proclaims: “Back in my day we had nine planets!”