Rigel is basically Orion’s ankle. You can find it if you look for the three stars of his belt, then down the belt to the bright white star below it. The name comes from Rijl Jauzah al Yusra, the Left Leg of the Jauzah (Jauzah was the Arabic title for Orion).

Fun fact: Rigel was mentioned in several Star Trek episodes, in the form of its planet, Rigel VII. Captain Pike had landed there and been attacked, and this history, as well as more current events, were mentioned in episodes of New Generation and Deep Space Nine.

Scientists think that Rigel and the other bright stars that make up Orion may have formed out of the molecular clouds that can still be found around Orion. Like Capella, its brightness is owed to its being really a team  effort; there are three stars in its system, the blue supergiant Rigel A and a companion double star, described as “distant and dimmer companions“. The star is variable, as many supergiants are, dimming slightly and then brightening over a 22-25 day period.

Apparently, if Rigel A went supernova, it would be brighter than the moon in the night sky. This is a risk with supergiants, who tend to burn hot and fast.

There is a great deal of mythology for Orion, since it is such a large and distinctive constellation, but not so much for the individual stars. 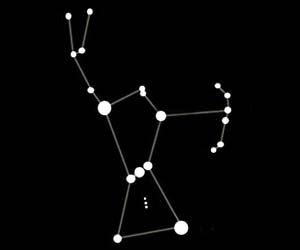 The constellation Orion. Rigel is the star on the bottom right.

According to the blog EarthSky, Rigel played a part in Norse myth. Along with Venus, it is a contender for the asterism of Aurvandil’s Toe. Orion would have been the giant Aurvandil himself, who lost a toe to frostbite while Thor was carrying him home on his back (How Aurvandil ended up in this state we don’t know.) The thunder-god broke the toe off and threw it into the sky as a star. The Edda is silent on which star, but since Aurvandil’s name can be read as something like dawn-wanderer, Venus seems indicated. (Thor also takes credit for Þiazi’s eyes becoming stars; he seems to have made a habit of this.) There may, however, have been an alternate tradition, and etymology isn’t everything.

In Inuit myth, Rigel is included in the myth of Qimmiit, “the dogs”, which explains how Orion’s belt was formed. Four hunters and their dogs came across a bear and chased it into the sky. Three of them became the stars in Orion’s Belt (Ullaktut). One of them, who had dropped his mitt, fell behind and became the star Rigel, which is lower than the Belt in the sky. (In other versions he returned to earth.) Their dogs became the Hyades, Qimmiit.

Finally, in an astrology chart, Rigel indicates inventive and mechanical abilities, honour, humour, wealth, and benevolence. Ill-aspected, however, it can indicate recklessness.

The image at the top is an artist’s impression, from here.

2 thoughts on “Rigel: the blue star from the galactic giant.”