Everyone is familiar with Gertrude Jekyll’s dislike of magenta – “malignant magenta”, as she called it. Many other writers of her period were equally dismissive, such as Alice Morse Earle, who said that as she glanced back through her writing on the subject, she felt the word “made the black and white look cheap.” (Kellaway: 93-5)

E. A. Bowles referred to certain geraniums as having, ”a pernicious habit of daunting that awful form of floral original sin, magenta, and rejoicing in its iniquity.” (Bowles: 98) Wilhelm Miller pulled no punches in The Garden, saying of discord: “One colour is responsible for nearly all the trouble, viz. magenta and the tones near it.” (Miller:156)

This led to some controversy, as others, like the American writer Louise Beebe Wilder, argued in favour of “Magenta the Maligned”. Clarence Elliott, who owned the famous Six Hills Nursery in Stevenage, went further and criticized the avoidance of magenta, saying, ”Some folk seem hardly to like to use the word “magenta,” as though it were unclean, and resort instead to “rosy purple.” This seems as bad as softening “cold bath” into “soapy tepid.” (Elliott: 603)

It seems odd that a colour which had only received a name 50 years before should be universally condemned, to the point where it needed defenders at all. Perhaps a colour named for a battle was bound to be controversial.

Most people today would look blank if you asked them about the Battle of Magenta, but it was an important turning-point in the Second War of Italian Independence. Magenta itself was a small Italian town, but it and Solferino were the turning points of the war. The Sardinian forces, along with Napoleon III’s troops, routed the Austrians there.(4th June 1895). The Austrians were forced to retreat, and Patrice de Mac-Mahon, who had fought in the war, was made the first Duke of Magenta by Napoleon.

In the same year, Professor Auguste Wilhelm Hofmann was experimenting with aniline dyes at the University of London. These new dyes were more colourfast, and brighter, than the old plant-based ones, and his main discovery was a reddish-purple one which he named after the then-famous battle.

And this is where it went wrong for magenta. These new dyes were both bright and cheap, which meant that anyone could wear them.  To add insult to injury, these new colours often appeared in floral patterns on cloth and wallpaper. No wonder Alice Earle, in a moment of candour, admitted, “it is really more vulgar than malignant,”(Kellaway: 95) thus putting her finger right on the sticky class issue involved.

As she goes on to point out, the purple of the ancient Romans was most likely a magenta colour. (In the book Colour: Travels Through the Paintbox (2003), Victoria Finlay describes finding “Tyrian Purple” cloth in a museum – only it was fuchsia colour: “I suddenly wanted to smile. I had an image of Roman generals holding up their arms in triumph beneath suitably triumphant arches – clad from victorious head to victorious toe in pink.”) Mrs. Earle points out that “Fifty years ago no one complained of magenta…” and Mrs. Wilder uses almost the same words to defend her colour.

Magenta, and its neighbours.

Another problem with magenta, as with many of the new dyes, was that they were made using arsenic. In the second half of the nineteenth century there was first a craze for arsenic products, and then a predictable backlash against being poisoned by your clothes, wallpaper, and just about everything else you can think of. You can read about this (if you can stand it) in The Arsenic Century: How Victorian Britain Was Poisoned at Home, Work and Play, by James C. Whorton.

Fashion in the garden, like fashion in clothes, changes all the time, although it’s usually slower. The Arts-and-Crafts movement was certainly an influence in Britain, as Susan W. Lanman points out, with their dislike of industrial products and colours, a dislike that still influences British garden design and taste. American writers seem to have been just as averse to magenta, however, with Louise Yeomans King, whose book The Well-Considered Garden (I915) had an introduction from Gertrude Jekyll, alluding to the “unmentionable” colour. The reaction against Victorian bedding-out, the brighter the better, was also a factor.

Interestingly, after the Second World War, when Vita Sackville-West was making her garden at Sissinghurst, she included a purple border, which has a fair bit of magenta in it. Graham Stuart Thomas suggested that she included purple because Gertrude Jekyll didn’t like it, either. (quoted in Lord:63) He also thinks that the interest in silver plants which took off in the fifties with the work of Mrs. Desmond Underwood, who specialized in them, helped. They were reassuring to people who were still nervous about strong colours, taking some of the brashness away.

Magenta took it on the chin again during the pastel eighties, when Vita’s White Garden was the ultimate in garden style, but when the rich dark colours came back, with purple and crimson among them, guess who was in the baggage train.

You still often see garden books warning that magenta flowers “need careful handling” or “are difficult to place”, so it seems that it’s still the problem child of the border.  Some writers, like Christopher Lloyd, seemed to revel in this, placing it next to yellow or orange. One plant he particularly favoured was geranium ‘Ann Folkard’, which has bright yellow-green leaves and screaming magenta flowers. It is in your face, although actually the two colours are complementary, and shouldn’t be any more shocking than red flowers against green leaves. Somehow, it is.

Geraniums are the poster children for magenta, as lots of them have it. The brashest and biggest is geranium psilostemon, which has very fetching flowers, with dark centres like eyes. Others include children of psilostemon like ‘Ann Folkard’ and ‘Patricia’, as well as geranium  x riversleaianum  ‘Russell Prichard’ and geranium sanguineum. Plant some of these next to some rose campion, with its fuzzy silver stems and strongly coloured flowers for a real show. (I used to grow Patricia next to them – very eye-catching. Gertrude Jekyll would have been sick behind a bush.)

Other obvious plants would include gladiolus byzantinus, purple loosestrife, the stronger-coloured phloxes, and liatris, the Kansas gayfeather. The petunia Purple Wave is another good example of a strong, bright magenta. 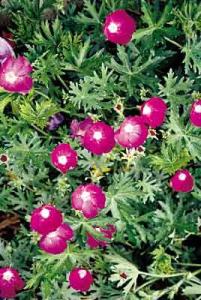 Callirhoe or winecups is a good colour, with silky petals and a habit of winding itself amongst the other plants. I keep meaning to get one. (Clarence Elliott also endorsed it as being “true magenta” and praised its glowing colour.) (Elliott:603) In nature, of course, many plants are by nature a sort of washed-out magenta colour, which Thalassa Cruso called Garden-of-Eden, because it seemed to be the original plant colour. Honesty and dames’ rocket are that sort of colour, and I don’t recommend them next to the stronger ones, it just weakens them. (There are stronger-coloured varieties of lunaria or honesty, such as Munstead Purple, which are useful.)

If you’re into shrubs, there are many good rhododendrons, spireas, and of course there’s bougainvillea. (When I lived in Santa Barbara they used to grow it over the chain-link fences put up on median dividers.) Azalea formosa is said to be a good colour as well.

As you’ve probably guessed by now, I have a fair amount of magenta in my garden, all introduced on purpose. It began when I was reading the familiar “careful with the magenta” warning, and something inside me snapped. I thought, why not put them all together, they can’t clash then. I was widening one bed in the garden, and I thought it would be ideal, since I already had some rose campions and two geranium Patricia. I was careful to get all the rest of the perennials I listed above, feeling that the more the better. 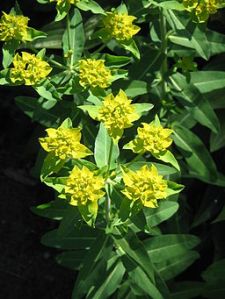 Euphorbia schillingi in all its greenish glory.

Two euphorbia schillingii gave height and contrast with their yellowy-green flowers (technically “bracts”). For silver, there was rose campion, and some artemisia. Then I got some astrantia ‘Ruby Wedding’ and sanguisorba ‘Tanna’ for a darker colour, and some salvia ‘Mainacht’ and monkshood ‘Spark’s Variety’ for a bluish note. The last two may seem odd, but Louise Beebe Wilder recommends it, and I agree with her. Bluish-purple and reddish-purple are close colours, and flatter each other.

Having invoked the colour wheel, I should mention that magenta has got itself embroiled in another controversy.  If you got to the pop-science website BioTele, you can find a discussion of whether magenta is a colour. Apparently there’s a whole argument about this, with the other side represented by Ars Technica. So even when it’s just a lightwave magenta can stir passions. As far as I’m concerned, magenta had better be a colour. Otherwise my garden will be invisible.