Looking at the Martian Manhunter now, what I find myself wondering (apart from why the green skin) is why Mars? Apart from alliteration, I mean.

No doubt its nearness played a part, although these days that works against him, as we know a great deal more about Mars now. The idea of human-like life on Mars has gone by the wayside. and if you asked anyone these days about Martians, they would probably think of Marvin the Martian instead.

The Manhunter’s literary origins stretch back to pulp stories from the early 1900s, as the brief excitement over “canals” on Mars seemed to hint that maybe we weren’t alone. Way back in 1877, the Italian astronomer Giovanni Schiaparelli observed what appeared to be lines on the surface of Mars. He named these canali, which was translated into English as “canals”. 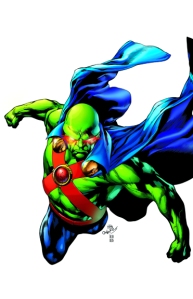 It was the American astronomer Percival Lowell, whose initials are memorialized in the symbol for Pluto, who really ran with the idea of Martian canals, however. He theorized that the canals were an attempt by a dying civilization to tap the polar icecaps. People were digging huge canals all over in the 19th century (Suez, Panama) so an advanced civilization might well have a similar system.

He believed that such a huge project meant one planet-wide government, an idea he set forth again and again in lectures and books.

Postulating life on Venus and Mars, however, wasn’t totally far-fetched. If Earth is the Cinderella planet, Mars and Venus might well have shared our luck, being similarly sized, possibly habitable planets. (For the record, Lowell also thought he saw canals on Venus.  He may have been seeing the veins in his eyeballs,)

Lowell may not have convinced many people, but he influenced popular literature; Edgar Burroughs Rice of Tarzan fame wrote many books about life on Mars, mainly the John Carter books. H. G. Wells was also inspired to write about life on Mars. They and others popularized the idea of Mars as arid, ancient and doomed. However, as time passed and telescopes improved, the idea of life on Mars receded into sci-fi movie territory. 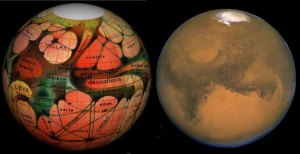 By 1955, when the Martian Manhunter debuted in The Brave and the Bold, the Space Race was heating up. The US had announced that it would put a satellite in orbit, the USSR responded in kind, and the race for space began. In 1957  the USSR put Sputnik into orbit. It was a good time to introduce a friendly alien, as the skies turned scary for Americans.

In the early stories, Mars still had a thriving civilization, and Jonn would put various bits of Martian technology to use during his exile on earth, or make contact with his family.

However, the idea, popularized by Burroughs and others like Camille Flammarion, that Mars was an older, drier, dying Earth had an effect. As time went on the storyline changed and Jonn was the last Martian, who had suffered through the death of his entire race. Unlike Superman, however, he came to Earth as an adult, pulled there by a scientist’s experiment gone wrong. He had to watch his family – his whole civilization – die, rather than growing up and learning his origin as Superman had.

The Martian Manhunter combines the powers of Superman and Batman in an interesting way. He has super-strength, can fly, and is invulnerable. Also, he can become intangible, and can read minds. On his home planet he was a detective, thus the “Manhunter” title. (Earth’s Greatest vs. Mars’ Greatest, anyone?)

In his early appearances he used his secret identity as a hard-boiled detective to investigate crimes. His power of telepathy came in handy although he had to be discreet about using it.

Because of his array of super-powers, he often stood in for Superman in Justice League stories. Writers paired him with Green Arrow, who substituted for Batman. In fact, he and the archer headlined the first issue of The Brave and the Bold. Stories involving aliens or interplanetary travel were a natural fit for a Martian.

One interesting idea from the nineties was that he was a global superhero, not tied to Metropolis or Gotham. People all around the world knew him as a member of the Justice League. This was an admirable effort to find a niche for a superhero who, despite being one of the original seven of the Justice League, never really had a place of his own (or a book).

Some have even questioned whether John needs a sci-fi setting, contending that his USP is that he is a Martian among humans, and that it’s time to move on from Mars.

His status as a world-wide superhero plays into his latest role, in Justice League United. This Justice League spinoff is set in Canada, and written by the Canadian Jeff Lemire. Funnily enough, it teams Green Arrow and the Manhunter again. The others are Stargirl, Animal Man, Supergirl, Adam Strange and a Canadian Cree girl, who goes by the name Equinox. Since most of these characters were in the Justice League of America, I guess they’re the Branch Plant League. (Canadian joke.)

It has some nifty touches: in the first issue Animal Man and Stargirl are at a Toronto celebrity convention when the action begins, and an outer space plot brings another underused alien, Hawkman, into the story. Of course, the big Justice League story right now is the movie. We know Aquaman will be in it, and what he will look like (not orange). Rumour had it Benedict Cumberbatch was going to play Jonn, but that seems to have gone nowhere.

And I leave you with a single thought: Hulk vs. Martian Manhunter. Jonn wins, right?

If you liked the image of John at the top, click here.