My brother, who was something of a comics nut (still is, actually), had a bedspread made up of panels that were reproductions of the first issues of Action Comics, Detective, etc. We could recognize Superman, Batman, Wonder Woman and Green Lantern, but one guy had us puzzled.

Who was the guy in red with the white cape? He seemed kinda like Superman, in a fancier outfit. (Unfortunately, we were not the only ones to think this. But let’s keep things in order.) Both he and Superman were doing anti-social things to cars; the man on the cover of Whiz! comics had pitched it into a far-off wall, and seemed pleased about it. 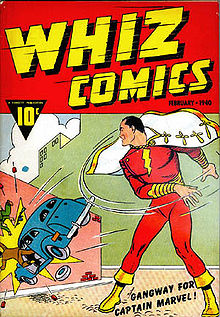 Whiz told us who their superhero was: Captain Marvel. (There was a certain me-too-ism about that, as Superman and Batman had already launched, and Whiz no doubt wanted to make sure they reached the same audience.)

Captain Marvel was incredibly popular right from the start – he outsold Superman, which seems hardly credible these days. (I suspect that if you stopped people on the street, close to 100% could identify Superman; Captain Marvel would probably strike out completely.)

Back in those days the market for comics was primarily children, and just as Robin gave Batman a sales boost, the fact that Cap’s secret identity was an 11-year old boy no doubt helped his appeal. As the ScreenCrush blog put it, he’s the superhero equivalent of the movie Big. Newsboy Billy Batson only had to say the magic word and a huge bolt of lightning would lance down from the sky and transform him into Captain Marvel.

The other part of his appeal came from the storylines themselves. Unlike Superman, whose powers had a pseudo-scientific explanation involving our yellow sun, Captain Marvel was magical. He got his powers from a wizard, he transformed from orphan boy to superhero with a magic word, and his stories often involved magic of one sort or another.

Nor was he alone as he faced down the bad guys: he had a super-family to help him. He shared his powers with his cousin Mary Batson, aka Mary Marvel, and later Captain Marvel Jr. joined them. (This character, aka Freddy Freeman, was Robin to Cap’s Batman, since he was another orphan whom Cap rescued from Captain Nazi.)

As Grant Morrison put it:

If Superman was Science Fiction, and Batman was Crime, Captain Marvel planted his flag in the wider territory of pure Fantasy. His origin story detailed an out-and-out shamanic experience of a kind familiar to any ritual magician, anthropologist, or alien abductee. (Loc. 658)

Morrison goes on to say that everyone wants their Shazam! word – the magical transformation that will transform someone into their idealized self. Billy Batson had his – SHAZAM, an acronym that summed up his powers:

It’s an interesting mixture – Classical and (Judeo-) Christian. Captain Marvel’s black hair, dark eyes, and general appearance came from a different pantheon: Hollywood. The actor Fred MacMurray, then a young star (best known for Double Indemnity), was the physical model for the super-hero.

This may explain why CM was brown-eyed. Everywhere except amongst super-heroes, brown is the dominant gene; it is vanishingly rare in the comics. (Hal Jordan, when his eyes aren’t glowing green, is another brown-eyed hero.)

Of course, in the comics Cap’s adult appearance is said to be modelled on his father, an archaeologist, who was killed by his evil assistant. (His wife died with him, which explains why Billy Batson is an orphan. Don’t be a superhero’s parent if you want a long life.1) 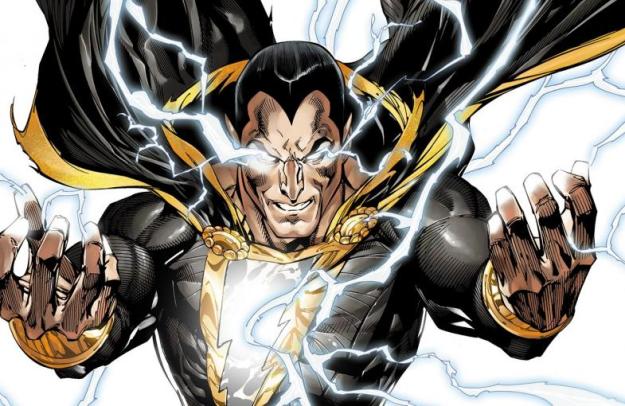 The murderer used a stolen scarab to give himself superpowers, becoming Black Adam, the Lex Luthor to Cap’s Superman. (sorry) Adam gets his powers from Egyptian deities:

This gave the comic, like the Dr. Fate and Hawkman stories, a strong Egyptian tone. (Black Adam has a girlfriend, Isis, in some stories.)

Cap and Adam have similar uniforms, and they both derive their powers from a magic word and the lightning. This makes them evenly matched, and usually Cap has to resort to one sort of trickery or another to defeat him. In the last while, Adam has become a more morally complex character, who, like Sinestro, has been corrupted by his own inflexible ideas and character.

Legal problems of various kinds involving copyright have kept Captain Marvel from the shelves for a long time, although every so often DC tries to revive him. The latest effort came with the New 52, a controversial reworking of the Billy Batson story in the back of the Justice League. In this version he’s a little older, and definitely more streetwise.

When he gets his powers, which the old wizard grants him reluctantly, he immediately uses his adult appearance to buy beer for himself and his friend Freddy. He looks set for a life of spectacularly-garbed petty crime until events overtake him, in the form of Black Adam and the Seven Deadly Sins.

A lot of people felt that making Billy less like Oliver Twist and more like the Artful Dodger was disrespectful to the character. Billy does keep some of his better characteristics, however. He willingly shares his powers with his friends, and grows into his new responsibilities at an accelerated rate. Really, he’s been given the Marvel treatment – reformed villains are quite common there – which is certainly a different way of approaching the character.

I liked it, so you won’t be surprised to hear that Geoff Johns was behind it. He says that he thinks the problem with Shazam is that he was on the shelf for so long, while other characters were evolving as good writers moved their characters forwards.

I think a lot of writers have trouble with the boy inside the man, either playing it for laughs or making him a little bit simple. You’d think they’d sprung fully formed from an editor’s head. Weren’t they ever children themselves? (Having said this, Shazam would make a brilliant cartoon show. What with Freddy and Mary, and all the rest of the characters, he’s a Superfriends unto himself.)

I’m just throwing this out, but a good Shazam story might be a more cheerful version of the 2012 storyline a Death in the Family. Like Batman, Cap is an orphan, whose parents were killed, and who builds a surrogate family, one he shares his abilities with. (In the stories where the Joker is the man who killed the Waynes, he stands in the same relation to Batman as Black Adam does to Cap.) Maybe Adam could try to break those bonds, out of envy or anger, and the Marvels and their allies would finally pull together and defeat him.

There is, of course, another famous orphan whom Cap resembles: 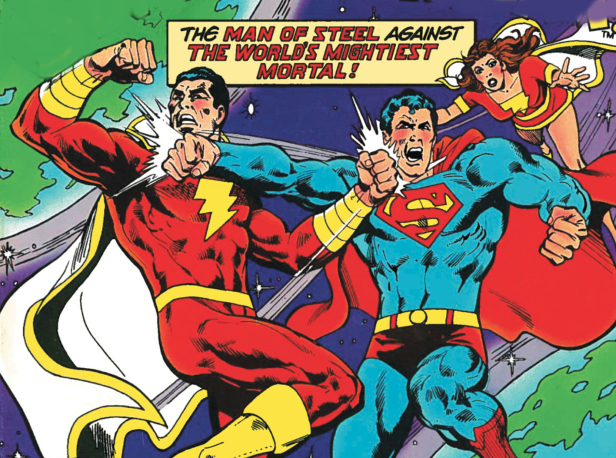 Back in the 1940s, the Big Red Cheese was outselling Superman. The people who owned Action Comics naturally resented this, and the battle was joined. (The comics like to have Captain Marvel and Superman square off from time to time, since they are probably the most powerful beings on Earth. This may be a literary reflection of the tangled legal relationship between the comic companies that have owned the two characters over the years.)

To quote Grant Morrison once more,

Today, every comics company has at least one, and sometimes several, characters who are direct analogues of Superman: Mr. Majestic, Supreme, Samaritan, Sentry, Hyperion, the High, Apollo, Gladiator, Omniman, Optiman, the Public Spirit, Atoman the Homelander, Superior the Plutonian, Alpha One… (Loc. 645-9)

Back then, however, National Comics (owners of Action) saw things rather differently, and they sued Fawcett (owners of Whiz) for copyright infringement. National won in 1953, and Cap began a long exile from the comics, which isn’t over even now. Next, a British imitator called Marvelman was born, and suffered his own legal problems.

Later, Marvel Comics would decide that the copyright in the name had lapsed, and introduced their own Captain Marvel, who would go through various permutations of his/her own, originally as the alien Mar-Vell, and later as the human Carol Danvers.

In 1972 DC licensed the Captain Marvel and his family, and by 1991 they had all the rights secured. The Big Red Cheese could fly again. Now, to avoid confusion with the Marvel superheroine, he’s generally called Shazam, and the name has been officially changed to avoid any more lawsuits. (Since I like them both, this is handy for me.)

As I mentioned above, the comics have staged many fights between Cap and Supes. A full record of all of them can be found here. It makes sense that Earth’s mightiest mortal would square off with the Kryptonian, especially since Cap’s powers are based on magic, and Superman is vulnerable to magic. (Wonder Woman’s sword, made by the smith-god Hēphaistos, cuts him.) YouTube also has numerous videos of Superman vs. Captain Marvel, including this one:

Unfortunately, he never seems to have regained his popularity. I’m not sure that in this current climate, where even Superman has to “Batmanned” – yes, Man of Steel, I’m talking about you – that Shazam has much chance.

It’ll be interesting to see how the upcoming DC movie will handle the character. I would strongly advise them to check out the Multiversity: Thunderworld issue, which showed both the sense of fun and the dimension-spanning storytelling that a good Shazam story should have.

The only thing known yet is that Dwayne Johnson is attached to it, as Black Adam. If it goes big it could kickstart a whole new interest in the character and his world. I look forward to a lot of kids in red T-shirts with the BIG lightning-bolt.

1. Victorian novels also have a high parent mortality rate, although you could argue that conditions justify it.↩

Reference:
Morrison, Grant 2011:Supergods: What Masked Vigilantes, Miraculous Mutants, and a Sun God from Smallville Can Teach Us About Being Human, Spiegel & Grau.

4 thoughts on “Shazam: Hear the Thunder, Ride the Lightning”