A number of myths around the world related how the sun was once captured, and either fixed in its proper sphere or else made to stand still in the sky.

One of the best-known is the Egyptian myth of Atum’s Eye.

This Eye, embodied in the goddess Tefnut, was angry with Atum (or Ra in some versions) and left for the deserts of Nubia, where she raged against the gods and humans. The moon-god Thoth went to her and tried to calm her down, but to no avail.

Finally a minor god called Onuris, “He-who-brought-back-the-Distant-One”, lassoed her with his rope and led her back to Egypt. (In other versions Thoth and the air-god Shu persuaded her to return to Egypt, where she took on a more benevolent form as the joyful goddess Hathor.)

Another well-known myth of this type concerned the Japanese goddess Amaterasu, who withdrew into a cave after her brother committed various outrages in her home and temple. The darkness and quiet alarmed the other deities, who decided on a plan to return the sun to the heavens.

They had a party, with dancing and laughter, outside Amaterasu’s cave, and when she finally peeped outside to see what was going on, grabbed her and blocked the entrance to her cave, thus ensuring that the world would have light. The gods blocked the door with a ritual boundary-rope, a tenuous connection to other sun-leading myths.

Amaterasu comes out of her cave. Wikimedia.

The sun was captured, rather than choosing to retire, in a Baltic myth. The fifteenth-century missionary Jerome of Prague told that he met a tribe who worshipped a giant hammer because once the sun had been stolen by an evil king, and imprisoned in a tower. The signs of the zodiac had broken open the tower with this hammer, releasing the sun. This is generally interpreted as the twin star-gods rescuing the sun-maiden, using a hammer forged by the heavenly smith or provided by the thunder-god.

Another such story concerned the Hawaiian trickster-god Tane, who lassoed or snared the sun, forcing it to stand still in the sky. Various stories explained why he did this: so his mother Hina could finish her taro planting, so she could finish drying her bark strips, so that the days would be of reasonable length. 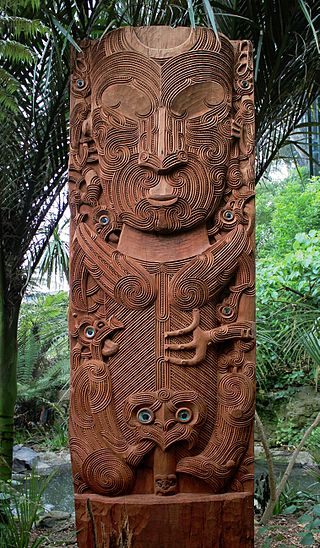 Carving of Tane nui a Rangi, at Auckland Zoo. Wikimedia.

This last also had a Polynesian variant, which tells how Maui and his brothers snared the sun. He beat the sun with an animal’s jawbone until it was almost dead, whereupon he finally heeded the sun’s pleas for mercy and let it go. It never really recovered, and from then on it moved more feebly across the sky. However, Maui kept the ropes on it, just in case. They can be seen as the sun rises and sets.

Other myths like this appear in North America, among peoples as diverse as the Innu of Labrador, the Ojibwa of the Midwest, the Huron of Ontario and the Dogrib of the Northwest.

All the heroes of these stories were hunters. This may be because their expertise with trapping and stalking would make them the logical choice for catching the sun. In other places real-life hunters used the same magic to keep the sun from setting before they neared home.

The Lapps had little “sun-rings” which they used for that purpose – they looked through the loop at the sun, and the handle (something like a lollipop stick) anchored the sun in the earth, keeping it still in the sky.

In the Fiji Islands, hunters took a handful of reeds from those growing on a hilltop, and tied the tops together to keep the sun from going down too soon. In Australia, South Africa and the Yucatan (South America) people would lay a stone or sod in the fork of a tree, both marking the sun’s progress and preventing it from descending further.

2 thoughts on “Sun-Catcher Myths and Magic”