Sheila’s Brush is a Newfoundland term for a storm on or about the 18th of March. Because Sheila’s storm comes just after St. Patrick’s Day, Sheila is often described as the saint’s wife or mother. You would think that this would be an Irish tradition as well, carried to the new world by immigrants, but it appears to be a local invention.

Just who Sheila was, and why she causes a storm on the 18th, has many explanations:

The most common explanations emphasize the antagonism between Sheila and Patrick, and blame the storm on her housekeeping. One variant says she sweeps so vigorously because Patrick was celebrating his birthday in fine style the night before. Almost every explanation says it is the last big storm of the winter.1

The weather aspect of the Sheila story reminds me of the German Mother Holle, who causes snowfalls by shaking out her feather bed. One variant that says snow before Christmas comes from Sheila either shaking her pillows or plucking geese. (Halpert: 165) 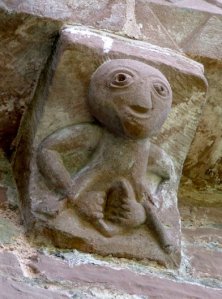 The name Sheila will make many think of the Sheela na Gig (Shelia of the Breasts). There is much dispute over the meaning of the Sheelas found in many old churches in Ireland (mainly) and Britain.

While it is unclear exactly how these obscene figures could become St. Patrick’s housekeeper/wife/mother, Irish and Scottish myth and folklore are rich in grotesque and malevolent feminine figures that could have inspired the Sheelas.

Something about the name seems to have stuck, because in the 18th century English troops in Ireland burlesqued St. Patrick’s Day by dressing up as Patrick and Sheila, with the “Patrick” bound in ropes and drawn by Sheila through the town while a “priest” sprinkled dirty water on passersby. (Halpert: 170)

Over time “Sheila” also became an Irish term for any slovenly or muddled old woman, so you can see where the idea of Sheila as a poor or angry housekeeper came from.

The Cailleach and the Saint

One myth that Halpern and his informants did not know about, however, involves the Cailleach, a hag goddess of winter. She sometimes takes on giant characteristics, as when she drops rocks from her apron that become mountains. She was magically powerful, and like Mother Holle could control the weather.

It’s not likely that when people imagine St. Patrick and his housekeeper quarrelling over the weather, they are imagining a pagan deity versus a Christian saint. But it’s nice to think that somewhere in the background of the “dirty Sheila” is the figure of a powerful hag goddess who can turn summer to winter, and doesn’t mind what she shows.

1. If only. Sheila has a sister, unnamed, who doesn’t house clean until May 24th.↩

Links:
Irish Newfoundland Association on Sheelagh’s Day
From The Dictionary of Newfoundland English
Sheila’s Brush as a second chance for drunks?
“Drowning the Shamrock”: apparently a custom
Sheila’s Day once a thing in Australia

Cailleach Links:
Cailleach and Brigit: weather lore
Irish cailleach lore
Scotland Hag of Winter
In the Irish Times
And a video on the Cailleach and weather folklore