The Irish god Nuada is known for three things: his magical sword, his sliver arm, and losing the kingship twice. HIs losses, however, define him in ways that show his quality.

Apart the Irish sagas, Nuada also features in Irish folklore, including legends about the landscape and genealogies.

Nuada is mainly associated with Maynooth, which nowadays is a very Catholic place, with a major seminary. However, its name was originally Magh Nuada, or Nuada’s Plain, and the flag of its province, Connacht, shows Nuada’s right arm holding his magic sword. (He’s also connected to the Boyne river, but I’ll get to that in another post.) A dolmen there is said to be his tomb.

A late ogham inscription from Curraghmore West in Kerry reads NUADAT, or Nuada in the genetive case. Both pagan and Christian genealogies mention people name Nuada, including a bishop and an anchorite, so the name must have been common or prestigious enough that Christians would use it.

Several royal lineages (Laigin in Leinster, Eóganacht in Munster) also traced themselves back to the first Nuada, called either Nuada Necht or Argatliam, Silver-Arm. The legendary poet Finn File was also the son of a Nuada, this time Nuadu Necht. In the Fenian Cycle Nuadu Necht was the ancestor of Finn mac Cumhaill.

The Tuatha de Danaan were among the many invaders and immigrants who make up the story of Irish mythology. In their case, they needed to displace the Fir Bolg, who were already there and not minded to let the Tuatha rule them. The Book of Invasions gives the short version of the Tuatha’s conquest:

§58. Now Nuadu Airgetlam was king over the Tuatha De Danann for seven years before their coming into Ireland, until his arm was hewn from him in the first battle of Mag Tuired. Eidleo s. Alldai, he was the first man of the Tuatha De Danann who fell in Ireland, by the hand of Nercon ua Semeoin, in the first battle of Mag Tuired. Ernmas, and Echtach, and Etargal, and Fiachra, and Tuirill Piccreo fell in the same battle. Bress s. Elada took the kingship of Ireland post, to the end of seven years, till the arm of Nuadu was healed: a silver arm with activity in every finger and every joint which Dian Cecht put upon him, Credne helping him.

[59 gives the back story for Lugh, who became king after Nuada]

§60. To return to the Tuatha De Danann. Nuadu Airgatlam fell in the last battle of Mag Tuired, and Macha daughter of Ernmas, at the hands of Balar the strong-smiter. In that battle there fell Ogma s. Elada at the hands of Indech son of the De Dmnann, king of the Fomoire. Bruidne and Casmael fell at the hands of Ochtriallach s. Indech. After the death of Nuadu and of those men, Lug took the kingship of Ireland, and his grandfather Balar the Strong-smiter fell at his hands, with a stone from his sling. Lugh was forty years in the kingship of Ireland after the last battle of Mag Tuired, and there were twenty-seven years between the battles.
(Lebor Gabala Erenn)

Another version, told in the Second Battle of Magh Tuiread (Cath Magh Tuiread), goes into more detail about this second battle, this time with the Fomorians. This grew out of the situation after Nuada had been maimed, and forced to abdicate. For a time, a half-Fomorian named Bres had been king, but he only enriched himself and his people, and dissension grew.

After Nuada’s arm was healed, he was able to take back the kingship, and Bres was pushed out. Bres tried to regain the kingship, with the help of his fellow Fomorians, and this led to the second battle which is the subject of the saga.

The Tuatha had a feast before the battle, and a named Samildánach appeared at the door and sought entrance. On being examined, it turned out that his name, Many-Skilled, was more than accurate: he had all the skills of everyone assembled there. Nuada, as king, thought that this young champion might be the one to defeat the Fomorians, and abidicated in his favour.

Samildánach, or Lugh, then defeated the Fomorians, including his own grandfather, the monstrous Balor, and the Tuatha ruled. Nuada and Macha fell in battle, which has led some to assume Macha was his wife. (She was another of the Tuatha, part of a triad with the Morrigan and Badb.) In other stories his wife is Fea, a war-goddess.

Mark Williams observes that Nuada is “an oddly touching figure. Thanks to his maimed and then restored arm his kingship has already been cast into doubt once. More tellingly he is the only major Túatha Dé figure who is simply a warrior; he has no apparent skill, or dán, of his own.” (134) He points out that when Nuada steps down for Lugh, his virtues of prudence, justice and modesty are implied to be incomplete without the skills of the áes dána.

Still, he does have a magical sword, which was one the four treasures of the Tuatha de Danaan. Each was associated with a city where the Tuatha had learned magic and wisdom, with the sword coming from Gorias. These were powerful treasures:

No battle was maintained against the spear of Lug or against him who had it in his hand. No-one escaped from the sword of Nuada after lie had been wounded by it, and when it was drawn from its warlike scabbard, no-one could resist against him who had it in his hand. Never went an assembly of guests away unsatisfied from the caldron of the Dagda. And the Lia Fail, which is at Tara, never spoke except under a king of Ireland.
(The Four Jewels of the Tuatha de Danaan)

Some Irish folklorists and scholars link Nuada’s sword to the Sword of LIght (Claíomh Solais) which features in Irish folk tales. These stories do not have any Nuada-like figures, but instead the sword is guarded by a giant or cailleach and the hero must get it. He usually succeeds after a woman tells him how to defeat the guardian. The Wikipedia article has a list of folktales with this theme. 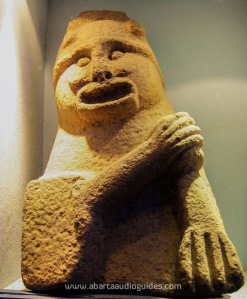 Tanderagee, in Northern Ireland, doesn’t sound like a promising place to find a god, however prehistoric. Its Irish name, Tom re Gaoith, means “Backside to the Wind”. The figure (above) is about two feet tall and dates from about 3 000 years ago. The way it is holding its arm has made many think of the god Nuada and the story of how he lost his arm in battle.

It is a long time, however, from 1 000 years BCE to the medieval period when the Irish sagas were being written. Perhaps, though, the story connected to this figure may have influenced the later story of the god-king.

Scholars see Nuada as related to two very different gods, the Irish Nechtan, and the Germanic god Tyr. As I said above, I plan to discuss the well-keeper Nechtan in another post, but the similarities between Nuada, Nodens and Tyr are worth noting.

First, all have a martial side. Nodens appears in Romano-British inscriptions as Mars Nodens, and Nuada’s main myth centres on two battles. Second, while we know nothing about how the god Nodens was imagined, we do know that the main stories about Nuada and Tyr explain how they came to lose their hands.

That Tyr lost his hand to the Fenris Wolf was such a well-known myth that it was almost proverbial, and poets alluded to it in their verses. (Briefly, the Wolf was fated to play a large part in the Ragnarök, so the Norse deities decided to bind him. Tyr offered his hand as pledge that they would unbind him again afterwards, placing it in the Wolf’s mouth. When the fetters bit, so did the Wolf, and Tyr lost his hand.)

Nuada’s story has been told above, but one version adds a legalistic quibble of its own to the tale:

It was then that Sreng challenged Nuada to single combat, as they had fought in the previous battle. [Sreng had chopped off his hand] Nuada faced him bravely and boldly as if he had been whole, and said: ‘If single combat on fair terms be what you seek, fasten your right hand, as I have lost mine; only so can our combat be fair.’ ‘If you have lost your hand, that lays me under no obligations,’ said Sreng, ‘for our first combat was on fair terms. We ourselves so took up the quarrel.’ The Tuatha De took counsel, and their decision was to offer Sreng his choice of the provinces of Ireland, while a compact of peace, goodwill, and friendship should be made between the two peoples. And so they make peace, and Sreng chooses the province of Connacht.
(Cath Maige Tuired Cunga)

In other words, the Tuatha offered peace, knowing that their leader was in no fit state to fight. So you could argue that the two stories are similar: both gods make a tremendous sacrifice to gain advantage for their people.

But the two stories are as dissimilar in several ways. Tyr chooses his sacrifice, but Nuada does not. Sreng (and the Fir Bolg) gets something for his efforts, while the Wolf does not. I suppose you could say that in the Irish story the Tuatha as a whole make the sacrifice, giving the Fir Bolg Connacht to spare their king.

You could argue that Nuada’s great sacrifice wasn’t his hand, which was lost as part of the fortunes of war, but relinquishing the kingship. The first time he may not have had a lot of choice in the matter, but the second time he stepped aside voluntarily in favour of Lugh Samildánach, an act of true nobility.

3 thoughts on “Nuada: the king with the silver arm”