On the Capitoline hill in Rome three deities had their temple, Jupiter, Juno, and Minerva. This cult was important enough that every city in Italy and later the Empire had its temple called the Capitola. Originally, however, the triad was made up of three gods: Jupiter, Mars and Quirinius.

If you’re wondering who Quirinus was, you’re not alone. Even the Romans themselves don’t seem to have been too sure what his function was or how he joined the Roman pantheon.

He was an important god in some senses: he had his own temples and priests. There were 15 official priests, called flamens, state-appointed functionaries who ensured that the rituals were preformed and all the taboos associated with their office observed.1

Some of these 15 were unimportant, like the priests of Pomona, but the flamen Quirinalis was one of the big three, the flamines maiores, who served the first Capitoline Triad. The other two were the Flamens Dialis (Jupiter) and Martialis (Mars). Quirinus also received offerings of one-third of the arms captured after a war, the other two-thirds going to Jupiter and Mars. (Servius 6:589)

The first altar to Quirinus was built on the Quirinal Hill. This was originally Sabine territory, before becoming one of the seven hills of Rome. So Quirinus was a Sabine god. However, after the Romans conquered the Sabines, their territory became part of the Roman state, and their god was integrated into the Roman pantheon. (One explanation of his name is “he of the quirium,” making him the territorial god.)

Other explanations of Quirinus’ nature have seen him as a thunder-god, or else a war-god like Mars, deriving his name from the Sabine word for spear, quiris. Other theories point to the Sabine town of Cures.

Quirinus had four yearly festivals, with the main one falling on Febuary 17th, the Quirinalia. Not much is known about this festival, unfortunately, but his cult partner was Hora, the goddess of the hours. (A group of minor deities called the Virites Quirini shared his cult as well, perhaps personifications of the virtus or power of the god.)

The 17th was also the Stultorum Feriae, a day for roasting grain if you had missed the day set aside by your curia for this task. Each of the 30 curia (neighbourhood associations) had its own Fornacalia, a day set aside for roasting. Each year the Curia maxima decided the dates for each curia, which were then posted in the Forum. The Stultorum Feriae was the day when anyone too foolish to turn up at the appointed day could get their grain done. (The Latin translates as “Day of Fools”.)

In addition to the Quirinalia, the flamen presided at the three other festivals: Consualia Aestiva on August 21, Robigalia on April 25, and Larentalia on December 23. (Consus was the god of stored grain, Robigus was a deity/spirit of the mildew that damaged growing grain, and Larentia was another name for Dea Tacita, a goddess of the dead.)

The myrtle tree was sacred to him; two myrtles stood outside his temple on the Quirinal, one was called plebian, the other patrician. According to Pliny the Elder, the Patrician one was more vigorous as long as the Senate was powerful, but after the Social War their power declined and so did the tree. 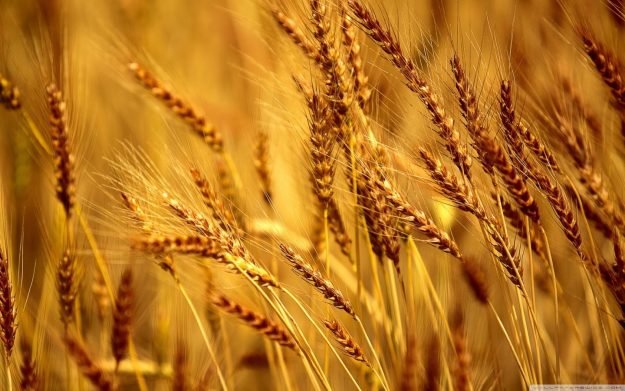 Romulus and Remus, you may remember, were the quarrelsome brothers who founded Rome. Perhaps it was inevitable, since Mars was their father and they were raised by a wolf. At any rate, when Romulus was building the foundations of Rome’s walls, Remus leapt over the not-yet-very-impressive barrier, and Remus slew him on the spot.

Romulus continued on to become Rome’s first king. and after his death he appeared to the noble Proculus Julius commanding him to tell everyone that Romulus and Quirinus were one. This new version of Quirinus’s origin caught on, and by the end of the Republic they were officially one. The enemy god had become a founder of Rome. (Note the surname Julius – this myth would become part of the legend of the Julian imperial dynasty.)

Romulus/Quirinus also told Proculus to build him a temple on the site of his appearance, and his festival in February marked its completion. This would have been in the sixth century BCE, but the earliest record of a temple says it was dedicated by Lucius Papirius Cursus in 293 BCE. It may have replaced an earlier one, as the temple site seems to have been a disaster magnet. The newer temple was struck by lightning in 206 BCE and burned down in 49 BCE.

Augustus Caesar rebuilt it as part of his program of public works to glorify Rome. Quirinus’ new temple was one of the largest in Rome, perhaps intending a comparison between Rome’s founder and Augustus’ own rebuilding of the city.

Ovid’s Fasti, a calendar of feast-days, has a different version of Romulus’ ending, more fitting for a founder who became a god. According to him, Romulus was taken up to heaven during a thunderstorm. (This may be the origin of the thunder-god theory.)

Ovid says that one of the explanations of Quirinus’ name and functions was that he united the Cures in Rome. According to tradition, Romulus divided the people of Rome into three tribes and 30 curia, which each had 10 gens or clans. All these gathered together as the comita curia, the original assembly, although it lost power over time and became a mainly religious body. Once Romulus and Quirinus were one god, some derived his name from co-virum, or assembly of men. 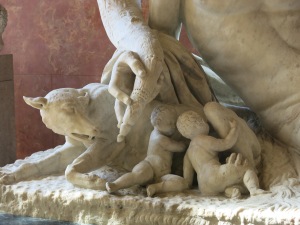 Romulus and Remus, suckled by a wolf. Wikimedia.

Another version of Romulus’ end says that he was distributing land to his army when the Senators fell on him and killed him, then cut his body in pieces. Each Senator then carried off a piece to bury on their land. The parallels with Julius Caesar’s demise were not lost on Roman writers, nor on emperors – Augustus included a statue of Julius Caesar in his new temple to Quirinus. (You also can’t help imagining Frazer, sitting down to write The Golden Bough, licking his lips over this myth.)

Is there a Greek Equivalent for Quirinus?

If you search for Quirinus on Google, one of the more entertaining pages you’ll find offers a list of 9 Roman Gods Who Weren’t Rip-offs of Greek Gods. I suppose you could quibble and say that Quirnius was originally a Sabine god who was incorporated into the Roman pantheon, but we get what they mean.

This doesn’t mean that no one ever tried to find a Greek equivalent for Quirinus, however. Some Greek writers, like Dionysus of Halicarnassus, reasoned that if Mars = Ares, and Jupiter = Zeus, then Quirinus must have had a Greek equivalent. He came up with a rather obscure war-god, Enyalius, who was essentially an aspect of Ares.

Enyalios, to give him his Greek name, was originally just another name for Ares, especially in Homer’s works. Later, he took on a life of his own as a son of Ares by Enyo, or else a son of Kronos and Rhea. Since Romulus was the son of Mars, this would fit, and parallel the Roman pattern whereby the three Capitoline gods were father, son and grandson.

But since Enyalios was seen as a more aggressive god who embodied all of Ares’ most warlike aspects, he seems a poor fit for Quirinus. Going by his festivals, Quirinus was more interested in grain than war. The Roman writer Servius tried to square this circle, remarking: “When Mars rages uncontrolled, he is called Gravdivus, when he is calm, he is called Quirinus.” (Schilling/Honigsblum: 145)

Dionysus does keep the idea of Quirinus as god of the Sabine people, claiming that he fathered a child who went on to found a city called Cures. (Many Roman writers traced Quirinus’ name to this city.) Dionysus was obviously inspired by the Romulus story.

Georges Dumézil’s theory of three social functions (ruling, war, producing) embodied in three gods seemed to be fulfilled by the original Roman trio. In his Archaic Roman Religion he discusses the nature of Quirinus at some length, and endorses the derivation of his name from *co-virino, an assembly of men, rather than of the curiae.

Dumézil’s Quirinus is similar to gods like the Celtic Teutates, a protector of the people and their prosperity, who watches over the grain and its processing so that the people will have food. For Dumézil the association of Quirinus with Mars is as big a mistake as the link with Romulus; both hide an essentially peaceful deity, like the Norse Njord, another third-function deity.

Of course, as Dumézil himself acknowledges, theories about Quirinus and his nature have a long life, from the time of the republican Romans to now. Short of a time machine, we cannot go back to a Sabine town and ask them what the nature of their god was. Like many archaic Roman deities, he seems to have faded gently to the point where the Romans themselves weren’t too sure who he was, but kept up his honours anyway.

1. One of Lindsey Davis’ Falco mysteries, One Virgin Too Many,  has the Flamen Pomonalis manipulate the taboos to get our heroes out of a tight spot.He sides with them as fellow plebeians.↩

The image at the top comes from Q8Designer at DeviantArt.

3 thoughts on “Quirinus: god of the People”