Helios, the Greek sun-god, doesn’t get much press. Compared to the oracle-god and plague-sender Apollo, he gets hardly any. I remember once watching Jeopardy with friends and being unable to convince anyone that Helios was the sun-god, not Apollo. (I was a bit disappointed in Alex Trebeck.)

The problem that Helios faces is that he is the sun; his name means “sun” and his role in Greek myth is to rise, shine and set every day. Unlike Apollo, he is too predictable to need buying-off. In the Odyssey, when his cattle are stolen Helios has to convince Zeus to raise a storm to punish the thieves. Apollo would’ve shot ’em full of arrows.

Helios’s response is interesting; like Demeter, he attacks indirectly, telling Zeus he will go shine in the underworld unless something is done. Zeus comes through for the sun, sending a lightning bolt down and killing all but Odysseus. Helios took more direct action against the huntress Arge, who boasted she would catch a stag even if had the speed of Helios. The god turned her into a doe.

Apart from the cattle, the best-known story about Helios is the tale of Phaethon, his son. The boy wanted to prove that his father was indeed the sun, and asked to drive the sun’s chariot so that all could see who his father was.

Helios, against his better judgement, agreed. Unfortunately, Phaethon was unable to control the sun’s horses, and his driving became so erratic he was in danger of burning up the earth. Zeus had to intervene, and killed him with a lightning bolt.

Like most sun-deities, he was all-seeing, so that oaths were sworn to Zeus, the Earth and Helios. This ability of his could be inconvenient; he spotted Aphrodite’s affair with Ares, and he was able to tell Demeter that Hades had kidnapped her daughter. 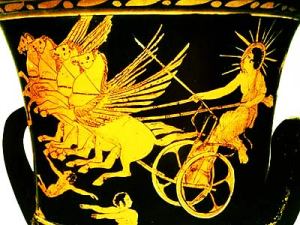 Phaethon means “Shining One” as you might expect of the sun’s child, and he has not only the sun as a father, but the Titan Hyperion (High One) as his grandfather. Helios was sometimes called Helios Hyperion, and both Homer and the poet Hesiod call him Hyperion’s son.

The Titan was the “God of Watchfulness, Wisdom and the Light”, and his wife was Theia, Divine/Goddess. She was sometimes called Theia Euryphaessa, wide-shining. In addition to Helios, their children include Selene the moon-goddess and Eos the dawn.

We don’t know much about the cult of Helios, but that in part is because of the sources: most of what we know about Greek myth comes from Athenian sources, while Helios’ cult centered on Rhodes. The Colossus at Rhodes was a giant image of Helios that stood guard over the harbour. The History of Macedonia site tells us:

In honor of what was effectively their national deity and to commemorate their heroic defense against Demetrius Poliorcetes’s array, the people of Rhodes commissioned the celebrated sculptor Chares of Lindos to create a huge statue of Helios.

Two reconstructions of the Colossus.

The Rhodians had an annual festival to their patron god, the Halieia, during which they drove a quadriga and four horses into the sea as a sacrifice. They had an annual athletic competition centered around the sun temple, as well as a larger festival every four years, the greater Halieia. Horse and chariot racing were major components of these festivals.

Nor was Rhodes the only place to celebrate the sun; Corinth had a festival of the solstice in its annual calendar, called Haliotropis. Helios seems to have played an important part in their calendar.

Several places had sacred flocks devoted to Helios, Offerings to him included white rams, boars, white horses, honey, and the rooster was especially sacred to him. So it seems that although the Greeks described sun and moon worship as “foreign”, they were just as guilty of it as anyone else.

Although, as West observes, Helios’ children and grandchildren could be quite outlandish: the sorceresses Circe and Medea and the unfortunate Pasiphaë were as much his children as the more benign Charites and Heliades. (They seem to have shared in their father’s bright nature, having solar-sounding names like Aglaea (“Shining”) and Helia.) 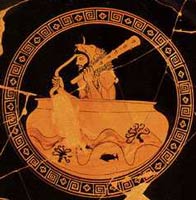 Hercules in the sun-god’s golden cup.

Many solar deities travelled across the night sky in a boat, sometimes drawn by swans. In some accounts Helios does just that, but in others he sails in a golden cup. One theory is that this was originally a coracle, but by the time the story of Helios lending his vessel to Hercules was recorded, it was definitely a golden cup.

Helios did another hero a favour when he restored Orion’s sight to him – an oracle had told the hunter to go out and face the rising sun. (The sun and sight are linked in many cultures, not surprisingly.)

As you might expect from a personification, Helios’ name means “sun”, and Helios and Eos (Dawn) “seem to be, along with Zeus, the only Greek deities of impeccable Indo-European lineage both in etymology and in their status as gods” (Davidson: 205). The name ηλιος is directly traceable to the reconstructed root word *s.h2w.l “sun” (West: 195), unlike the name Apollo, whose derivation is uncertain.

To sum up, as James Davidson puts it:

Although important divinities were associated with luminaries from an early date, for example Apollo with the sun, they were never identified with luminaries; that had come to seem alien. Helios, Eos, and Selene were not just sidelined; persisting on the sidelines seems to have been their main function, namely to be ‘‘minor’’ deities that other more important deities were not the same as; thus they too helped to keep Greek religion ‘‘Greek.’’ (205)

Still, it is interesting to know that many people did reverence the sun on rising and setting, and that there was an early version of the Scopes Trial over the nature of the sun, which the philosopher Anaxagoras maintained was merely a fiery ball. He was put on trial for impiety because of this assertion. (Politics may have played a part as well.) He was right, of course, but that was no help to him and he was exiled.

12 thoughts on “Helios: He Who Gladdens Mortals”