This is one of those questions with a short and a long answer. The short answer is that it is the Norse goddess Freyja’s necklace. The longer answer is that the necklace, and its owner, were intimately linked. The jewel and the goddess were linked in the same way as Thor and his hammer: an attribute that could both symbolize the deity and embody their power.

Freyja’s necklace and how she got it

Brísingamen is mentioned in a couple of sources, including the poem Þrymskviða:

Freyja then was angry and snorted with rage,
all the halls of the Aesir trembled at that,
the great necklace of Brisings fell from her.
‘You’ll know me to be the most sex-crazed of women,
if I drive with you to the land of the giants.’
(Larrington’s trans.)

After Freyja refuses to marry a giant, the gods decide to dress Thor up as a woman so he can pretend to be Freyja and get his hammer back:

Then they dressed Thor in a bride’s head-dress
and in the great necklace of the Brisings…
(Larrington.)

It is Heimdall who suggests dressing him as a woman, and that he should wear Freyja’s necklace. The verse tells us that he could see ahead, but it wouldn’t take precognition to see that Thor made an unconvicing goddess of love and beauty, and would need all the help he could get.

BrÍsingamen is also Freyja’s necklace in Gylfaginning and Skaldskaparmal, the first two parts of the Poetic Edda, which aimed to explain poetic and mythic terms.

The other mention of her necklace comes from Sörla þattur (where it is unnamed), and tells the story of how Freyja got the necklace in the first place. She went to the rock where some dwarves lived, and when she saw the beautiful necklace they were making, she just had to have it. The price, however, was that she had to spend one night with each of them. She agreed, and after four nights, went home with her new jewellery.

Loki found out how she had got her new necklace, and told Odin what his mistress had done. Odin ordered Loki to get the necklace, and stayed firm despite Loki’s protests that no one could get into Freyja’s bedchamber. Loki tried every trick he could think of, but finally he got in disguised as a fly. When he got in, however, Freyja was wearing the necklace even as she slept, so he became a flea and bit her, so that she turned and he could get at the clasp. 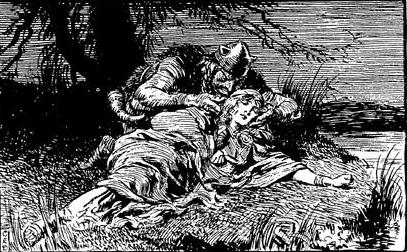 He then returned to his usual form, took the necklace, and returned to Odin. When Freyja woke and saw her door open and her necklace gone, she knew what must have happened, and ran to Odin. And,

Othin replied that considering how she had come by she should never get it back:

“- Unless you bring about a quarrel between two kings, each of whom has twenty kings subject to him; so that they shall fight under the influence of such spells and charms that as fast as they fall they shall start up again and fight on…”

Freyja agreed to this, and recovered her necklace. Thus began the eternal fight between two kings, until a Christian broke the spell.

So that would seem to answer the question of what BrÍsingamen is. However, the more complicated version goes back to the enmity between Loki and Heimdall. A poem called Husdrapa, from the 9th century, tells how the two gods fought at Singastein for a “beautiful sea-kidney” (hafnýra). Snorri Sturluson’s Prose Edda quotes this verse and explains it by saying that Loki and Heimdall fought in the form of seals.

The “sea-kidney” is just one of the many mysteries associated with this verse. There have been many suggestions as to what exactly it might be, ranging from the actual land under the two gods (most likely an island) to the beans that occasionally are carried by the ocean from the tropics to the north, where they were good-luck charms, to, of course, Freyja’s necklace.

“Sea-kidney” could be one of a group of kennings such as “heart of the sea” or “fjord-apple”, which indicate the shape of the body of water. The sea-kidney could be the shape of the island the two are fighting on, especially if you read the last part of the verse as saying that Heimdall “rules” the island. (Faulkes’ translation says he is “first to get” the “sea-kidney”, which leaves it open to interpretation.)

(Some have seen this fight as a version of the battles that Saami shamans fought in animal or other shapes. (Ladioner: 78) The Historiae Norwegiae tells of a dead sorcerer’s soul which attacked another shaman in the form of a whale. The second retaliated in the shape of wooden stakes, which pierced him through.)

There would be no connection between the story in Husdrapa and the necklace, however, if Snorri hadn’t linked them together, by saying that the two fought over Freyja’s necklace, and that Heimdall was “the returner of Freyja’s necklace”. Even then, it isn’t clear that the fight at/on Singastein was that fight.

There aren’t any others recorded, however, except for Ragnarok, so people have assumed that the battle of the seals was over the necklace. Another 9th century poem, Haustlong, calls Loki the “thief of Brísings’ belt [or hoops]”, and Snorri echoes it, along with a list of other thefts ascribed to Loki.

It does make you wonder what was so important about Freyja’s necklace that it would be stolen – did it have some function connected to her powers, like Thor’s hammer? (It may be significant that in addition to Freyja, Gefjun and Frigga also have stories in which they behave badly in return for a necklace. This jewellery was clearly worth having.)

To get back to the necklace itself, however, what does the name BrÍsingamen mean? In most of the Eddic sources, it is simply Freyja’s necklace. The name, by itself, means “Brísings’ necklace”, possibly related to Norwegian brisa, “to shine”. Some have seen this as meaning that Freyja is a solar deity. (Simek: 45)

However, a related episode in Beowulf has a hero steal a necklace of the Brosings (Brosinga mene). Lindow (89) thinks this should indicate that the necklace is the property of the Brísings, and that they were probably the four dwarfs who sold it to her. (Some have seen in this a parallel to Aphrodite and her smith-husband, Hephaestus, and the necklace to the love-goddess’ girdle.)

Another theory is that the “sea-kidney” is some form of drift seed. These were seeds or fruits from the tropics that were carried long distances by the sea currents. These were supposed to bring good luck, and in some places, especially Scotland, they were supposed to change colour around the Evil Eye. They were hung on strings around children’s necks, and were supposed to turn black if anyone wished them evil.

They were also known as “birth stones” and worn like a charm on a string or chain on the belt or around the neck by pregnant women. (Simek: 45) This might explain the differing translations of Haustlong, if the Brísingamen could be either a charm on a belt or a chain.

We know from Oddrun’s Lament that Freyja and Frigga could be invoked for difficult childbirths:

7. At last were born | a boy and girl,
Son and daughter | of Hogni’s slayer;
Then speech the woman | so weak began,
Nor said she aught | ere this she spake:

8. “So may the holy | ones thee help,
Frigg and Freyja | and favoring gods,
As thou hast saved me | from sorrow now.”

It may just be that Freyja, being a goddess and a mother, would naturally be called on for help, and that Borgny was covering her bets by calling the Queens of the Aesir and Vanir.

On the other hand, maybe Freya’s necklace, like Brigit’s mantle, was a charm that once consecrated to the goddess in question, could help a woman in childbirth. (The heart-shaped beans, like those pictured above, would be particularly appropriate for Freyja.)

Perhaps this power of fertility and healing is Freyja’s equivalent of Thor’s giant-smasher, and the bean on a string the female equivalent of the little Thor’s hammers found in the late pagan period.

11 thoughts on “What exactly is Brisingamen?”