Rather a glamorous name considering that what we’re talking about is plain white cake. We forget, however, the two things that made this cake exciting when it was first being made: the notoriety surrounding Lily Langtry herself, a celebrity/model/actress, and the new technologies and processes that made a white cake finally possible. 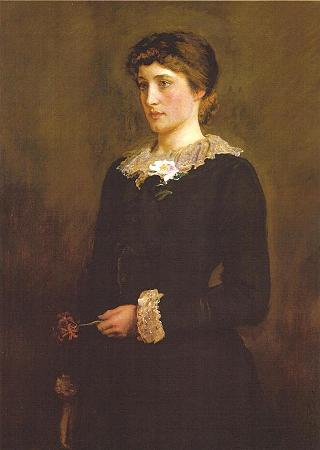 “A Jersey Lily” by Millais, from Wikimedia.

Lily Langtry was a celebrity of the late 19th century. She was, as the nickname suggests, from the island of Jersey, one of the Channel Islands. Like Dick Whittington, she set out for London to seek her fortune.

Her brother had just died and she naturally wore the deep black mourning (from the skin out) that flattered her extreme pallor (think Winona Ryder) This striking look got her invited into society.

The story goes that like Scarlett O’Hara, she had but one good dress, black of course, which she carefully pressed and wore. She certainly stood out from the crowd; she was an immediate hit, with Oscar Wilde praising her beauty.

The painter Millais did a portrait (top of post), which earned her the lifelong nickname “the Jersey Lily”. She became the mistress of Edward VII. This didn’t last, but after her fall from grace she became an actress. Her early brushes with poverty stimulated her entrepreneurial instincts, and she began setting up companies and endorsing products.

The most famous endorsement, of course, was Pears’ soap, which supposedly gave you a beautiful complexion like hers. No doubt this widely-seen advertisements suggested the cake’s name. 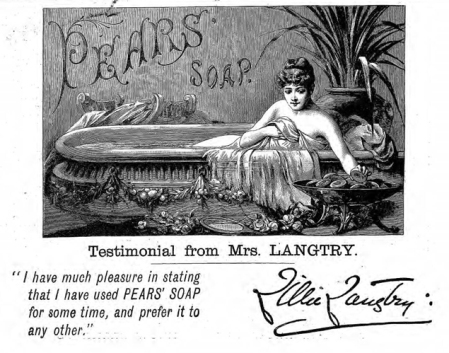 Nor was advertisement her only leap into fame; you can read about her subsequent career here. And, she may have inspired Sherlock Holmes’ wily female adversary, Irene Adler.

Just as Lily Langtry was able to put the new technologies of advertising to her advantage, essentially becoming her own brand, the cake that bears her name also benefited from technologies of the late 19th – early 20th century.

It is easy to forget just how difficult it used to be to get granulated white sugar. Refining sugar goes back to before Elizabethan times, with the Dutch establishing sugar refineries at Antwerp in 1500 and shipping their product to England and Germany. Sugar, however, came in “loaves”, which could be anywhere between 5 and 40 pounds each. 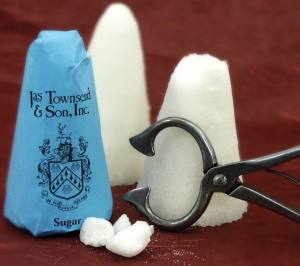 You would take special shears called sugar-nippers and cut a piece off, which then had to be pounded up small and sieved to take out the bigger lumps. (I once tried an old recipe for lemon curd in an Elizabeth David book that used these lumps; you rubbed them on the lemon to extract oil from the peel. The sugar crumbles as you go. It was incredibly time-consuming, but it made sense if you had a bunch of sugar lumps already lying around. Unless you do, I don’t recommend it. But it does smell nice.)

Like white sugar, refined flour has been around a lot longer than we think. It just wasn’t available to everyone, because it needed to be processed, which priced it too high for most people. Old recipe books feature a depressing litany of sieving and bolting flour to try to get the bran out of it. It’s no wonder old pictures of cooks tend to show pretty brawny women.

Automatic flour mills changed all this, and by the late 1900s white flour was commonly available, and the price much more reasonable. Bleaching flour whitened it even more, and allowed for whiter bread and cake. Ironically, these days you pay over the odds to get unrefined sugar or unbleached white flour.

Refined flour and baking powder, another new leaven, revolutionized baking. (First developed by Alfred Bird, of Bird’s custard powder.) It made really light-coloured, light-textured cakes possible. Many recipes for Jersey Lily cake only use one egg, as if showing off the use of the new leaven. (And of course, the new pale colour that the lack of egg yolks made possible. Angel food cake takes this even further.) A woman’s household money was also called her “egg money” so a cake that tasted good and only used one egg must have seemed like a blessing.

This is also a terrific cupcake recipe.

1 c. cake flour
1/2 c. white sugar
1/2 c. butter
1 extra large egg, beaten
1 c. milk
1 Tb baking powder
(optional: raspberry jam)
2 round 8″ cake pans, or one 12″ x 8″ one.
Cream together sugar and butter, add beaten egg. Sift together flour and baking powder. Now add half flour mixture to the batter, then half the milk. When that is mixed, repeat. Pour batter into pan(s) and bake for about 30 mins, or until a toothpick or skewer inserted in the cake comes out clean.

When cake has cooled, remove from round pans and use the raspberry jam as glue to sandwich them together. Ice with butter icing, flavoured with vanilla.

Many old recipes recommend either sprinkling the cake with nuts and raisins before baking or adding them to the batter.

One of the strengths of this recipe is that it can be as fancy or straightforward as you like. I usually make it as two layers because I like the raspberry jam in the middle, but a one–layer cake in a long pan, with icing or glaze on top goes down well.

This has to be one of the most successful desserts I have ever made. I think it’s because everyone likes layer cake, and it somehow reminds people of childhood. These days people only make cakes from scratch and in layers for company, whereas once (or so we like to believe) moms did this sort of thing all the time. Like creme brulée or chocolate mousse, it’s simple, and a lot easier to get right.

I can’t resist adding a recipe for lemon curd, in case you want to fill your cake with something a little sharper.

Pyrex or other heatproof bowl, saucepan half-full of simmering water to stand it over.

You can, if you want, rub the sugar on the lemons to extract the oil. I tried this once with sugar cubes, and it was very tedious, but the curd was good. (It might be easier with jaggery or piloncillo.) Otherwise zest the lemons and put the zest and the sugar in a heatproof bowl. Juice the lemons and strain the juice, then whisk them with the eggs.
Cut the butter into small cubes, so it will melt more quickly.
Set the bowl over the saucepan, making sure it’s stable, because you will need to stir.
When the sugar dissolves, add in the eggs, then the butter. Stir the mixture over the heat until, as Elizabeth David says, “it looks like thick honey”. It should hold the mark of the whisk or spoon, and bubbles should be beginning to form.
Take the bowl off the heat and let cool, stirring from time to time. Then put up the curd in small jars (it loses its flavour quickly once opened).
This is really good spread on brown bread or with brown sugar shortbread.