There are many stories in which a heroic character penetrates the otherworld and is challenged by some sort of ogre or other strange being. This challenger may question the hero’s worthiness or ability.

Norse myth has two examples of a female quester who faces a challenge to her fitness and an attempt to thwart her in her aims. In Hyndluljod Freyja has to convince the far-from-agreeable Hyndla to help her protegé win a lawsuit, while in the poem Helreid Brynhildar Brynhild is challenged on her way to Hel by a giantess who questions her ethics and actions.

Both poems show a female protagonist overcoming their challenger by means of speech; Freyja using persuasion and cunning, while Brynhild relies on the heroic method of describing her nobility and great deeds. 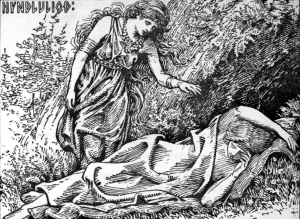 Hynd is the only Eddic poem that has a goddess as its main character. It comes from the Icelandic manuscript Flateyjarbok, which also gives us Sorla thattr, another story about Freyja, and Svipdigsmal, in which the character Menglod has been taken by some to be a disguise for the goddess as well.

Since it was not part of the Codex Regius, which contains most of the Eddic poetry, most translations of the Poetic Edda group Hynd at the end, with other poems like Baldrs draumar and Grottasongr, almost like the apocrypha in the Bible.

Helreid Brynhildar, on the other hand, does come from the Codex Regius, after the Short Lay of Sigurd. The saga Nornagests thattr also quotes it, except for the sixth stanza. The valkyrie/heroine Brynhild is the main character and speaker, on her way to Hel after being burned on a pyre. The poem is a justification of her life and deeds.

Several other heroic poems have women as their main characters: Sigdrifumal, the three Gudrunkvida poems, and Oddrunagratr. (Oddrun’s lament could be seen as a reversal of Brynhild’s poem: while Oddrun sits and weeps, Brynhild boasts of her deeds, and offers a robust defense of her choices.)

Both Hynd and Hel show the influence of other poems. Völuspá is an obvious one, since all three involve dialogue with otherworldly female powers. This puts Freyja and Brynhild in the position of Odin, since Vsp is a dialogue between him and a seeress, who turns to be a giantess. Hynd is very closely modelled on Vsp, with Hyndla asking, like the other seeress, “do you want still more?” (18, 34, 36, 38)

The other major influence is Baldrs draumr, in which Odin rides the road to Hel so he can learn why Baldr is having bad dreams. Unlike Vsp, in which the seriousness of the matter precludes the hurling of insults, Baldrs draumr closes with Odin and the dead giantess he has called up blackguarding each other, as they reveal their real identities.

Freyja and Brynhild are both closely connected to Odin, one as his concubine and the other as a valkyrie, so it’s not surprising that a poet would model poems about them on Odin’s adventures. And Odin’s adventures so often fall into the same genres as these two poems: travel to an otherworld, dialogue with a supernatural being, and a battle of wits.

All three feature insults exchanged between the speakers; but the worst that the dead giantess can say to Odin is that he is the “ancient sacrifice” (Orchard). Although, in the next verse she tells him that no one else should visit her until “Loki slips loose from his bonds”, so there’s a sting in the tail.

The exchanges between Hyndla and Freyja, and the giantess and Brynhild, are much more personal and caustic. Freyja’s exchange follows the pattern laid down in Vsp and Bld, of a reluctant seeress who must be persuaded to talk, and would just as soon stop. But while in Vsp the seeress finishes out the prophecy and sinks down, in both Bld and Hynd the seeress becomes testy, and the insults start to fly.

Both poems also end with a curse; although while Odin cannot avert Ragnarök, Freyja reverses the curse on Ottar. Odin’s question about maidens is either a deliberate non sequitur, to end the dialogue, or else a wave-riddle. (Frog)

Brynhild’s ride to Hel echoes another in Norse myth, Hermod’s ride to Hel after Baldr dies. Snorri’s account in the Prose Edda doesn’t give a lot of detail about the actual ride, but any mention of a ride to Hel would call to mind Hermod‘s mission. (He travels to Hel after Baldr dies, to see if there is any chance of ransoming the dead god. The goddess Hel says all must weep for Baldr, which sets in motion Frigg’s attempt to save her son and Loki’s thwarting of it.)

So we know that unlike Skadi’s adventures, these myths are meant to be taken seriously. They fit into a cosmological context, especially Hynd. The only poem with Freyja as the main character shows her as using the same powers as Odin, and with equal success.

Brynhild, too, is successful in her self-defense. Her final speech shows her contempt for her challenger and asserts her eternal love:

14. They must all too long in the face of great strife
men and women will be born and raised;
we two shall never be torn apart,
Sigurd and I together: sink yourself, giantess-spawn!

Her self-assertion is all the more important because a) it marks her as a heroine, whose honour rests in her deeds, and b) it rejects the giantess’s descriptions of her actions, which consistently belittle her:

1, You must not pass through
my courtyards paved with stone;
it would suit you better to be at your weaving,
rather than visit another’s husband.

2. Why should you visit from Valland,
scatter-brain, my dwelling?
You have gold-goddess, if you want to know,
gentle lady, washed a man’s blood from your hands.

Like Hyndla, the giantess mocks Brynhild by implying that she is a wanton, in this instance a house-wrecker who desires another’s husband. She goes on to imply that Brynhild is unfeminine and a killer, depriving children of their father. This sets the stage for Brynhild’s self-justification, which takes up the rest of the poem.

The dialogue between giantess and valkyrie is very like that of Sigurd and the dragon Fafnir, both showing a challenger mocking the protagonist, who must assert their credentials. The difference is that Sigurd is beginning his career, and kills Fafnir, while Brynhild is ending hers with heroic death, and nothing remains but determining her legacy.

Still, Brynhild is vulnerable to misinterpretation in a way that Freyja isn’t. If a goddess of love and fertility is promiscuous, that’s not to be wondered at; goddesses make their own rules. The Helreid, on the other hand, could be called Brynhild’s Defense, as it puts her case eloquently, and emphasizes how others mistreated and betrayed her, justifying her actions.

And, unlike Odin, Brynhild gets the last word. (As does Freyja – it must be a female thing.)

While the poets who composed Hynd and Hel may have felt freer in coming up with insults for Brynhild and Freyja, they also make goddess and the heroine win. Brynhild vindicates herself and her decisions, and Freyja gets the information she needs for her protegé.

Odin, on the other hand, cannot prevent Ragnarök, and Baldrs draumar can be seen as a first step on that road. So in a sense the volva/giantess does not need to insult him – he’s going down anyway.

Frog 2006: “Recognizing Mythic Images in Fantastic Literature: Reading Baldrs draumr 12 – 14″, in The Fantastic in Old Norse/Icelandic Literature. Sagas and the British Isles. Preprints of the 13th International Saga Conference I, Durham and York, eds. John McKinnell, David Ashurst and Donata Kick: 258-67. (pdf at academica.edu)
Quinn, Judy 2002: “Dialogue with a volva: Voluspa, Baldrs draumar and Hyndluljod“, in The Poetic Edda: Essays on Old Norse Mythology, eds. Paul Acker and Carolyne Larrington, Routledge: 245-74.
Sorn 2012: “Some Interpretations of Hyndluljod” on the Keeper of Season’s Hall site, May 19, 2012. (view here)
Volandarhusins, Freyja “Ottarr and Freyia – The Initiation of an Einheri” on the Lady of the Labyrinth site (view here)