The Greek god Apollo is the most rational, artistic and fastidious of the Olympians. So why is an animal noted for its ravening nature part of his cult?

Even the ancients found this a puzzle, and had several different solutions. Some denied that Apollo Lykeios had anything to do with wolves, deriving his name from either the place-name Lycia, or else from leukós, white (referring to the sun).

Since Apollo was popular in Lycia, and took the sun as his symbol, there was something to these arguments. But, there are still enough traces of a wolf-cult of Apollo around to show that in some places, at least, Apollo the Wolf-God was worshipped. The cult of Apollo Lykeios is attested from many parts of Greece, but it centers on the Corinthian Isthmus and especially Argos.

Argos, the wolf, and Apollo’s oracle

Both Argos and Tarsus, which had many Argive colonists, featured Apollo and wolves on their coins:

The reverse subject of a series of obol coins, believed to struck in Tarsus in the 4th century B.C., is the forepart of a wolf. No historical conclusion has been made about these coins until now. The existence of the Argives in Tarsus explains it because the wolf is the fundamental coin subject in Argos beginning from the 5th century B.C. There must have been a significant number of Argives living in Tarsus because Dio Chrysostom mentions that the people of Tarsus were proud to be colonists from Argos.

In Argos, the sanctuary of Apollo Lykeios was built next to the agora, or marketplace. It was supposedly built by Danaus, descended from Zeus and Io, who became king of Argos after an oracle declared in his favour against the reigning king, Gelanor.

The most famous building in the city of Argos is the sanctuary of Apollo Lycius (Wolf-god）. The modern image was made by the Athenian Attalus, but the original temple and wooden image were the offering of Danaus. I am of opinion that in those days all images, especially Egyptian images, were made of wood. The reason why Danaus founded a sanctuary of Apollo Lycius was this. On coming to Argos he claimed the kingdom against Gelanor, the son of Sthenelas. Many plausible arguments were brought forward by both parties, and those of Sthenelas were considered as fair as those of his opponent; so the people, who were sitting in judgment, put off, they say, the decision to the following day. At dawn a wolf fell upon a herd of oxen that was pasturing before the wall, and attacked and fought with the bull that was the leader of the herd. It occurred to the Argives that Gelanor was like the bull and Danaus like the wolf, for as the wolf will not live with men, so Danaus up to that time had not lived with them. It was because the wolf overcame the bull that Danaus won the kingdom. Accordingly, believing that Apollo had brought the wolf on the herd, he founded a sanctuary of Apollo Lycius.

Plutarch’s Pyrrhus 32.5 continues the story, including the oracle that encouraged Danaus:

Now, the Argives say that these figures were set up in their market-place as memorials of an ancient event. Namely, when Danaüs first landed in the country, near Pyramia in the district of Thyreatis, and was on his way to Argos, he saw a wolf fighting with a bull; and conceiving that he himself was represented by the wolf (since both were strangers and were attacking the natives), he watched the battle to its end, and when the wolf had prevailed, paid his vows to Apollo Lyceius (the wolf-god), attacked the city, and was victorious, after Gelanor, who was at that time king of Argos, had been driven out by a faction. This, then, was the significance of the dedication.

Servius’ Commentary on the Aeneid 4: 377, according to Frazer:

Danaus received an oracular response from Apollo bidding him journey till he saw a bull and a wolf fighting. He was to watch the issue of the fight, and if the bull conquered, he was to found a temple in honour of Neptune (Poseidon), but if the wolf was victorious, he was to dedicate a shrine to Apollo. The wolf conquered the bull, so Danaus built a temple to Wolfish Apollo.

So while there’s some difference over who Apollo sent the oracle, the result was the same. Danaus became king, restoring the ancient line of Zeus, and the cult of Apollo Lykeios became established. Which is a nice foundation-myth, and explains why the cult of Apollo the Wolf-God was so important to the city. 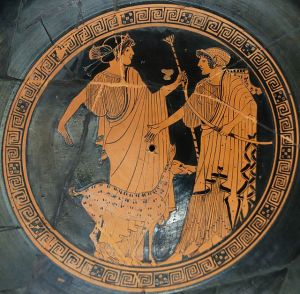 Wolves also featured in some of Apollo’s more intimate moments, starting with his birth.

Apollo and his sister Artemis were born on Delos, after Hera decreed that their mother Leto should not give birth on any ground anywhere on Earth. A variant gave her wanderings more purpose; she travelled from Hyperborea, Apollo’s winter home, to give birth on Delos, or else from Delos to Xanthus in Lycia, her main shrine. In some versions of her travels she was accompanied by wolves.

Aelian, On the Characteristics of Animals 4. 4:

Wolves are not easily delivered of their young, only after twelve days and twelve nights, for the people of Delos maintain that this was the length of time that it took Leto to travel from the Hyperboreans to Delos.

Apollo may have had fond memories of these guardians, for he sent she-wolves to suckle his son Miletus (Antoninus Liberalis, Metamorphoses 30):

In Crete Apollo and Acacallis, daughter of Minos, had a child called Miletus. Fearing Minos, Acacallis exposed him in a wood. By the  will of Apollo wolves would turn up to guard him and give milk in turns.

Apollo slept with Cyrene in form of a wolf according to the late Roman writer Servius in his commentary on the Aeneid (377), although other sources don’t mention this.

He also tells us that when Apollo killed the Python a wolf brought him a sprig of laurel, and that Apollo killed the Telchines in wolf-form. This last seems ungrateful, since one of them, Lycus, built a temple to Lycian Apollo at Lycia, according to Diodorus Siculus’s Library of History (v.56.1):

At a later time, the myth continues, the Telchines, perceiving in advance the flood that was going to come, forsook the island and were scattered. Of their number Lycus went to Lycia and dedicated there beside the Xanthus river a temple of Apollo Lycius.

To return to the Delphic cult of Apollo, his sanctuary held a bronze image of a wolf (Pausanias Descr. Greece 10.14.7):

Near the great altar is a bronze wolf, an offering of the Delphians themselves. They say that a fellow robbed the god of some treasure, and kept himself and the gold hidden at the place on Mount Parnassus where the forest is thickest. As he slept a wolf attacked and killed him, and every day went to the city and howled. When the people began to realize that the matter was not without the direction of heaven, they followed the beast and found the sacred gold. So to the god they dedicated a bronze wolf.

Aelian’s On the Characteristics of Animals (x.26-7), however, suggests that the statue is there to honour Apollo’s birth, for which Leto changed herself into a wolf:

Apollo takes pleasure in the wolf, and the reason… is this: they say that the god was born after Leto had changed herself into a she-wolf. This is why Homer speaks of “the wolf-born lord of the bow” (4. 101).

It wasn’t always so nice for the wolves, however. At Apollo Lykeios’s cult centre of Argos, sacrifices of wolves were offered at the temple. In Sicyon, Apollo showed locals how to poison wolves stealing their sheep:

Nearby is the temple of Apollo Lykios, by now in ruins and not at all worth seeing.  When wolves kept coming to their flocks so that they got no profit from them any more, the god identified a plkace where there was a piece of dry wood lying and told them (in an oracle) to put out the bark from this wood and some meat together with it for the animals.  And the moment they tasted it, the bark killed them. That bit of wood lay in the temple of Lykios.
– Pausanias Descr. Greece 2.9.6, talking of Sikyon – on the Isthmus. (Farnell p.358 no.7d)

The locals must have been grateful – Sicyon’s temple to Apollo Lykeios was next to the agora, just like in Argos. Sophocles’ Electra (6) and Aeschylus’ Seven Against Thebes (145) both refer to Apollo the wolf-killer, so the reference would have been clear to an Athenian audience as well.

The cult of Apollo Carnea, god of flocks and herds, probably explains why Apollo was so hard on his own animal. Wolves are notorious sheep-killers, and probably feel that any animal bred to be docile and well-fatted is legitimate prey. The human notion of ownership doesn’t enter into their world-view. Apollo, as a god who could be a wolf, controlled wolves and protected livestock from them. (According to Graf (99), the ancient Greeks sometime explained Apollo’s wolfish side this way.)

There are also suggestive, but odd, little details, like the scene in the Iliad (20.95) where Apollo speaks in the voice of the Trojan king’s son, Lycaon, whose name means something like “Wolf-Man”.)

And if you can’t beat them…

An ecstatic cult of fire-walking and ritual dancing in central Italy that centred around the cult of the Etrurian god Soranus became part of the cult of Apollo, perhaps because wolves were a central part of the cult myth, and the priests were called the Hirpi, from the Sabine word for “wolf”.

The cult was ambivalent about wolves, who stole the offerings to the god, but also showed the way to beat a plague that struck the area, when an oracle told locals to live on game like wolves themselves. (Insert paleo diet joke here.) This ambivalence about wolves may help to explain why it was associated with a foreign god, whose own nature was pretty ambivalent already.

Links:
Theoi.com on Apollo
Sparta, Apollo and the wolf
Farnell on the cults of Apollo