Asteria is another Greek star-goddess, but of a rather different type. She was associated with oracles of darkness, such as prophetic dreams, astrology, falling stars, and necromancy. (Her daughter Hecate, the witch’s goddess, would follow in her footsteps.) She was sometimes blended with the night-goddess Nyx, an alternate mother for Hecate.

Her parents were the light-goddess Phoebe and Coeus, both Titans. Her father’s name can be translated as “query, questioning“. This led to a tradition where Coeus stood for the active intellect, while Phoebe represented prophetic wisdom. (His Roman equivalent, Polos, was even more invisible than Coeus, but he stood for the axis around which the world revolved, which links him to Mundilfare of Norse myth, whose children became the sun and moon.)

Phoebe was the third holder of the oracle at Delphi, which she then passed on to her grandson. Her name comes from phobos meaning either ‘bright’ or ‘radiant’, or else ‘to give prophecy’. Phoebe and Polos may also have been a prophetic double-team, since he was the north pole and axis of the heavens, while his wife’s oracle was the omphalos, or world’s center.

Asteria’s husband was Perses, the Destroyer. He was associated with the constellation Perseus and also the dog star, Sirius. (Appropriate for the father of dog-headed Hecate.) His brother Pallas had the goat-star Capella, bringing storms in its wake, and the third, Asterios brought the cooling western wind that eased the heat of the dog-days.

Leto, the mother of Apollo and Artemis, was her sister, and both had dealings with Zeus, with very different results. Asteria fled from the thunderer’s advances, becoming a quail to evade him. Finally, she fled into the sea, but that only called Poseidon’s attention, and she finally transformed into the island Ortygia (Quail), better known as Delos.

Later, when Leto was about to deliver Zeus’ twin children, she took refuge from Hera’s persecution on her sister’s island. She often appears in art alongside her sister, niece and nephew: the Delians. 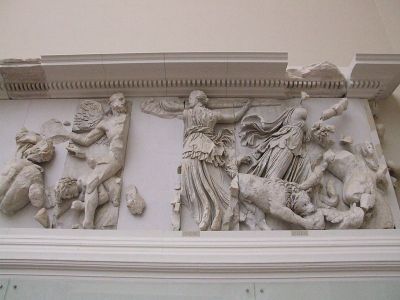 There is a definite split between Leto and Asteria; while Leto is described as “shadowed”*, the very name Asteria suggests visibility, the stars that stand out of the night sky.

It may be, too, that their children’s prophetic and magical powers reflect that split; while Apollo’s oracles were given in the full light of day, and his killing of the Python at Delphi symbolized the new advent of the celestial god, Hecate’s witchy spells and necromancy were carried out in darkness.

*Not sure where I found this, as most translations of the Theogony say “dark-gowned” or similiar.

10 thoughts on “Asteria: the Night Oracles”