In his fickleness and imagination he even gave pleasure to Odin, who with his well-sipping and auto-asphyxiation knew too much ever to be otherwise amused …the reason why Odin had taken the great, foredoomed step of making Loki his blood brother – for the pleasure, pure and simple, of his company. (Chabon: 53)

Odin and Loki are blood-brothers, and we have to wonder what each saw in the other that led to such an unusual partnership. After all, the two are on entirely different trajectories. Odin is trying to get as far as he can from his giant ancestry, to the extent of murdering his own grandfather to make the world. Loki, on the other hand, is constantly pulled back and forth, but usually ending up with the gods, until he chooses the giants for good.

John McKinnell has an interesting take on this when he discusses which of the gods and goddesses can “know fate”. The context is the poem Lokasenna in which Loki serially insults all of the assembled deities, and McKinnell (among others) thinks that Loki’s aim is to bring on chaos and destruction. Odin and some of the others know fate, but Loki either doesn’t realize the consequences of his actions, or else doesn’t care.

McKinnell (261) hypothesises that he can’t foresee past his own death, at Ragnarok. That may be what Odin is counting on. (Note that only after Loki reminds Odin of their blood-brotherhood does he get a seat at the feast. Odin’s response calls Loki the wolf’s father – an ironic comment, an ambivalent welcome.)

The article Why Loki? by Lokadottir makes a good point when she says that the attraction for Odin is that he and Loki are the changing gods:

Loki is quite probably the most dynamic figure in Norse mythology – one of the few dynamic characters, along with Odin. Most of the other Gods and Goddesses are relatively static: they do not change over time, nor do they alter according to their experiences. They are – not to put too fine a point on it – more or less eternal, which is one reason the shattering of this assumption with the death of Baldr is such a traumatic event.

Freyja remains essentially a perpetual daughter of joy, while Thor seems content with his role as plodding giant smasher. When they acquire things, as Freyja did Brisingamen, or Thor Mjollnir, these are merely emblematic of the basic nature they already express rather than being transformative events. This is also one of the implicit underpinning of the marriage between Njord and Skadi, for neither is willing or able to transform their nature in order to be able to accommodate the other. Rather than being inexplicable (as some would have it), the blood-brotherhood of Loki and Odin seems both fitting and entirely natural in light of their mutual mutability.

They shape-shift, disguise themselves, and if you trace out a timeline of Norse myth from creation to destruction, they can be seen to change, Loki more so than Odin. (Further to that quote above, both Loki and Odin are rumoured to have slept with Skadi. Perhaps she liked her men more adaptable.)

At first I thought that Odin only changed his name (remember Harbard in Vikings?) while Loki changed shape, gender, you name it. But Odin becomes an eagle to steal the mead of poetry, and a serpent to the same end. He turns himself into a woman to get at Rind so he can impregnate her with Baldr’s avenger. (Adding rape to his list, a crime not found in Loki’s dossier. The events around Baldr’s death change both gods.)

In Lokasenna Odin is accused of cross-dressing to act as a witch, both charges of the unmanliness that was so radioactive to the Norse. (Odin could legally kill Loki on the spot for that, if they were humans.)

There have always been theories that Loki is an aspect of Odin that took on a life of its own. (You can see how that might happen.) The myths of Odin and Loki (and usually Hoenir) travelling about confirm that the two share a taste for adventure, and enjoy pitting their wits against whoever they encounter. Since Odin also is one of three brothers: Vili and Ve, some have taken that as evidence that Loki and the mysterious Hoenir are also aspects of him.

I wouldn’t go that far, and anyhow it’s impossible to get beyond the written sources to say that Loki and Hoenir were or weren’t originally part of Odin. We just don’t know. What we can say is that they join up in several myths, some of which have cosmological import. 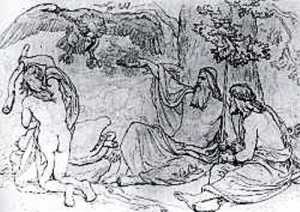 The travelling myths usually involve the gods getting into a scrape, because of Loki, who then has to get them out of it. In the Thiazi myth, the giant tricks them out of most of their food, Loki strikes at him, gets dragged along behind Thiazi as he flies away in eagle form, and finally is blackmailed into helping the giant kidnap Idunn of the life-giving apples. Loki later brings her back and connives at the death of Thiazi.

A similar story comes at the beginning of the Volsung saga, when Loki kills an otter for the gods’ dinner, only to learn that it was really a man called Otr, who had shapeshifted into animal form. Loki is despatched to get the weregild for Otr, and sure enough some of the gold is cursed, and the greed it induces is the motive for several murders.

The other myth involving the three is in the cosmological poem Voluspa, and in it three gods, Odin, Hoenir and Lodurr (possibly Loki) bring the first humans to life, and give them gifts. These are all benign, with no sting in the tail, as though the doom to come were enough.

Both Loki and Odin are “between” gods – Loki is constantly going back and forth between god and giant, as well as being ambivalent in gender and even species. Odin, on the other hand, stands between the conscious and unconscious, which is what makes him so powerful magically. Loki’s changes are all on the outside, as he turns himself into a serving-girl or mare, or plays with status and gender to make the grim giantess Skadi laugh. Odin goes within to effect his magic or to access knowledge.

While Loki is always in company when he changes shape or sex, Odin gains access to his inner wisdom through a lonely ordeal, hanging on the World Tree for nine nights. He brings his conscious and unconscious minds together as he “takes up” the runes, a means of oracular knowledge he will now be able to use anytime. (In Richard Ault’s paper, he suggests that the unconscious is often gendered feminine. Odin would be doing his gender-bending on the inside.)

Another difference between them is that Loki’s gender-bending is usually to an immediate end, as you might expect from a trickster-god. Odin, on the other hand, is playing a long game, being willing to suffer for the runes, practice the feminine art of seidr, and lose one eye to access Mimir’s wisdom. Any means of augmenting his magic and wisdom is open to him; he does not set limits. If that means going into areas marked feminine or servile, fine. 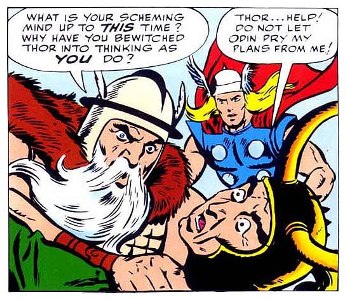 The Marvel take on the twosome.

Odin and Loki are the two gods who are willing to parley and match wits with the giants. Thor’s methods for dealing with them are more direct, and the Vanir males tend to marry them. (Another trifunctional division of labour.) To go back to origins, both Odin and Loki are descended from giants, as are most of the Aesir if they trace back. Odin’s mother and grandfather are giants, while Loki’s father is a giant, while his mother’s origin is unknown. (Since John Lindow’s Murder and Vengeance, the idea that she is one of the goddesses has caught on.)

Both of them, then, stand between the worlds of the giants and those of gods and humans. But while Odin built Asgard and Midgard in the first place to get away from the giants, and does not acknowledge his giant kin, Loki is constantly pulled back and forth in his loyalties. While Odin will visit with giants, even sleep with giant women, he is always after something. The giants who engage in wisdom contests with him should remember Jakobsson’s Law: the gods always cheat (115, n. 21.).

Loki, on the other hand, tends to get the worst of it when he encounters a giant: Thiazi drags him along behind him as he flies away until Loki is half dead, and Geirrod locks him in a chest and nearly starves him. It might be fairer to say that he is bounced around between the two until he finally chooses the giants and does his bit to hasten ragnarok.

One final note: both Odin and Loki have well-known children. Odin’s best-known are probably Thor and Baldr, the beautiful and doomed young god. Loki’s are the Fenris Wolf, World Serpent and the death-goddess Hel. Their children are an allegory of the choices they make; Odin’s sons protecting this world and emerging to rule the next, while Loki’s children work to end this world and everything in it.

PS – I can’t leave this topic without mentioning a cartoon by Lady North star showing Odin, Loki and Hoenir making yet another unwise decision. Check it out.

PPS – I’m sorry about the link to the Lokadottir article but the original has gone beyond the reach of the Wayback Machine.

5 thoughts on “Blood-Brothers: Loki and Odin”