The Norse sea-god – if he reminded you of anyone in the Graeco-Roman pantheon, wouldn’t it be Neptune/Poseidon? And yet, when the medieval Icelanders were copying out Greek myths, they explained the god Saturn/Kronos to their readers as “Njord”. What did the two have in common, that Njord would stand for Saturn to an Icelander?

This seems odd. Most of us think of Kronos as Zeus’ father, a jealous, child-eating deity who castrated his own father. Njord, on the other hand, is a benign god who looked after sailors and traders, although he suffered from complicated marital problems. 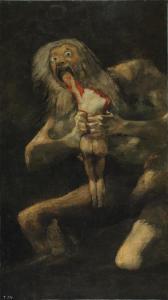 However, once you dig a little deeper, it makes perfect sense:

In Greek cosmology, the first gods were Ouranos, the sky-god, and Gaea, the earth-goddess. Among their many children were the Titans, including Kronos. However, Gaea rebelled against her husband after he put their other children, the Cyclopes, into Tartartus, the underworld. (Her own body, since she was the Earth.)

She enlisted her own children against him, with Kronos and his brothers holding him down and castrating him to put an end to Gaea’s endless childbearing. This is one reason why Kronos’ symbol was the sickle. (Which became the modern symbol for the planet Saturn, by the way.) As Hesiod’s Theogony has it:

“She [Gaia, Earth] lay with Ouranos (Uranus, Sky) and bare deep-swirling Okeanos (Oceanus), Koios (Coeus) and Krios (Crius) and Hyperion and Iapetos (Iapetus), Theia and Rheia, Themis and Mnemosyne and gold-crowned Phoibe (Phoebe) and lovely Tethys. After them was born Kronos (Cronus), the wily, youngest and most terrible of her children, and he hated his lusty sire.”

The other is the age of peace and plenty that he brought in. The Golden Age was one of the many myths of a paradise where food came without effort, and people lived in peace:

…no creature was wild, nor did they eat one another, and there was no war among them, nor any strife whatsoever. To tell all the other consequences of such an order of the world would be an endless task. But the reason for the story of the spontaneous life of mankind is as follows: God himself was their shepherd, watching over them, just as man, being an animal of different and more divine nature than the rest, now tends the lower species of animals. And under his care there were no states, nor did men possess wives or children; for they all came to life again out of the earth, with no recollection of their former lives. So there were no states or families, but they had fruits in plenty from the trees and other plants, which the earth furnished them of its own accord, without help from agriculture. And they lived for the most part in the open air, without clothing or bedding; for the climate was tempered for their comfort, and the abundant grass that grew up out of the earth furnished them soft couches. [272b] That, Socrates, was the life of men in the reign of Cronus; but the life of the present age, which is said to be the age of Zeus, you know by your own experience. Would you be able and willing to decide which of them is the more blessed?

As the Stranger goes on to say in Socrates’ dialogue, all this ended when Kronos was deposed in turn, and Zeus took the throne. This god, the main focus of Greek mythology, and father of every god and hero whose mother couldn’t flee fast enough, replaced his own father as king of the gods.

Like all the Titans, Kronos married his sister. Rhea was a goddess of fertility and abundance, suitable for a god of agriculture and plenty. In Thrace, at least, Rhea was an important deity, who took on characteristics of Hecate.

The Roman god Saturn lacked Kronos’ blood-spattered origin, but was also a god of agriculture. (Although in one version Saturn went to Latium after being exiled from Olympos, where he presided over a Golden Age of peace and plenty.) Saturn had two goddesses associated with his cult: Ops, an obscure goddess who was probably a deity of plenty, and Lua, who name is connected with words for plague and destruction.

In Heimskringla, a history of the Swedish and Norwegian kings, the first kings are gods: first Odin, then Njord, then Freyr. After that, Freyr’s son by a giantess, Fjolnir, is the first human (ish) ruler, after which the rulers are entirely mortal.

Thus Njord, like Kronos, is the middle king. The history talks about Odin, Njord and Freyr as if they were merely extraordinary people, and so it describes Odin as a great sorceror and culture hero who establishes laws and dynasties. Describing him as human makes for some odd passages; he dies in his bed, but has himself marked with a spear, which was supposed to send you to Valhalla to dwell with Odin.

Njord of Noatun was then the sole sovereign of the Swedes; and he continued the sacrifices, and was called the drot or sovereign by the Swedes, and he received scatt and gifts from them. In his days were peace and plenty, and such good years, in all respects, that the Swedes believed Njord ruled over the growth of seasons and the prosperity of the people. In his time all the diar or gods died, and blood-sacrifices were made for them. Njord died on a bed of sickness, and before he died made himself be marked for Odin with the spear-point. The Swedes burned him, and all wept over his grave-mound.

After he dies (also marked with a spear), his son Freyr takes over, and the good harvests and peace continue. Just as with Kronos, Freyr overshadows his father to the point that the Swedish Yngling dynasty traced themselves back to him, deriving their name from Freyr’s alternate name, Yngvi.

Like Saturn, Njord had two wives. The first, his sister, is often assumed to be the goddess Nerthus, described by Tacitus in the Germania, because of the similarity of their names. (Tacitus’ description of her cult sounds rather like that of Rhea in Thrace, by the way.)

But when Njord joined the Aesir, they made him divorce his sister-wife, and in time he took another, the giantess Skadi. (Whose name is connected to words meaning “injury” and “shadow”.)

Njord and Freyr, the gods of the Vanir (another group of deities, initially opposed to Odin’s Aesir) both stood for peace and plenty, so it’s not surprising that their time as “kings” would be a legendary Golden Age, a prelasparian period before the rule of men.

It’s interesting, too, that in Ynglinga saga no attempt is made to make Odin’s rule part of that pacific time. His role as the god of warriors and magicians was too clear in people’s minds for that.

The Golden Age: a universal dream

There are probaby two other reasons that the Ynglinga saga doesn’t dwell too much on the Golden Age part of Njord and Freyr’s reigns.

First, however much the text euhemerises them, they were pagan gods, and Christianity was still a relatively new, and contested, religion. If things were better with the old gods, why change? So Snorri Sturluson couldn’t dwell on how much better things were long ago, but at the same time a history of the Swedish kings couldn’t leave out their most famous ancestors.

Second, there was a political dimension to both Plato’s use of the Golden Age myth and later Roman writers’ evocations of a simpler, better time that Snorri did not share. The idea first appeared in Hesiod’s Works and Days, a Greek text from the 6th century BCE:

First of all the deathless gods who dwell on Olympus made a golden race of mortal men who lived in the time of Cronos when he was reigning in heaven. And they lived like gods without sorrow of heart, remote and free from toil and grief: miserable age rested not on them; but with legs and arms never failing they made merry with feasting beyond the reach of all evils. When they died, it was as though they were overcome with sleep, and they had all good things; for the fruitful earth unforced bare them fruit abundantly and without stint. They dwelt in ease and peace upon their lands with many good things, rich in flocks and loved by the blessed gods.

Hesiod suggested five ages: the Golden, Silver, Bronze, Heroic, and Iron. Plato simplified this to four, leaving out the Heroic Age (see The Statesman, above). Plato used the idea of deterioriation as part of his philosophy; in his Republic he explictly states that the “myth” of Golden Men, Bronze Men etc. should form part of the state ideology.

Among the Romans, Virgil saw the Golden Age as one when humans were one with nature:

[532] Such a life the old Sabines once lived, such Remus and his brother. Thus, surely, Etruria waxed strong; and Rome has thus become the fairest thing on earth, and with a single city’s wall enclosed her seven hills. Nay, before the Cretan king [Jove] held scepter, and before a godless race banqueted on slaughtered bullocks, such was the life golden Saturn lived on earth, while yet none had heard the clarion blare, none the sword blades ring, as they were laid on the stubborn anvil.

beginning a tradition that would eventually inspire the Romantics, among others. Ovid, writing in the time of Augustus, saw the Golden Age as one when virtue flowed naturally from the harmonious relations between people and nature. (This, as much as his scandalous versifying on the art of picking up women, may have led to his exile in Moesia.)

It seems a long way from a medieval gloss to the dream of universal harmony and ease. But, that dream is indeed universal. Even in the hard-bitten Norse sagas we find paradises like Glaesisvellir, always far away and hard to get to. Which tells us that the land of plenty is always inaccessible, separated by great gulfs of space or time.

PS – This post was initially spurred by the section in WordPress stats that tells you what searches led people to your blog. It’s a lot less informative than it used to be, because of privacy concerns, but it still throws up some interesting sidelights. In this case, somone was searching for information on the cult of Saturn and Njord. So I Googled it for myself, and found the information about Njord as a gloss for Saturn.

Then I found another site which cross-compared Middle Eastern, Graeco-Roman and Norse deities. It seemed like Kronos and Njord had a fair bit in common. So I decided to write my own post on the topic, especially since it touched on an interest of mine, paradises and Golden Ages.

20 thoughts on “The Golden Age: Njord and Saturn”