It’s very hard for us now to reconcile the widespread worship of Hera in ancient Greece with her character as it comes down to us; she seems like the archetypal shrew. If you look her up, the entries focus on her persecution of Hercules and the women Zeus seduced or raped. These stories are well-known, so I want to focus on Hera’s actual cult in this post.

Hera was one of the Olympians, daughter of Kronos and Rhea. Unlike Zeus, she didn’t escape being swallowed at birth by her paranoid father, but after her future husband rescued her and her siblings, Okeanos and his wife Tethys looked after her as foster-parents. (It’s a very rare Greek deity who doesn’t have some connection to the sea.)

Zeus was both her brother and her husband, and the myths tell us that all of nature bloomed at their wedding. Leaving aside the question of Zeus’ many infidelities, two things stand out about their marriage:

They did appear together, but Hera also had her own temples and festivals. Her temple at Samos, an island close to Chios and Lesbos near Turkey, may have been the first roofed temple dedicated to a Greek deity. (It dates from the 800s BCE.)

The name Hera is an old one, found in Linear B writing from Pylos and Thebes. There are several different theories about the meaning of her name, all of which highlight different aspects of her character:

As the wife of Zeus and goddess of women, Hera was worshipped all over Greece, but she was patroness of the cities of Argos and Samos. She was the protector of Argos in the same way that Athena was for Athens, and the festival of Hera the protector involved an armed procession. 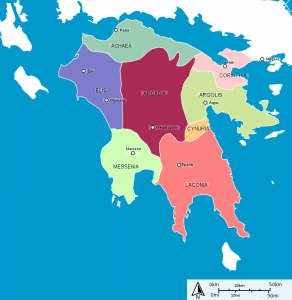 The ancient Peloponnese, showing Hera’s stronghold Argolis, with Sparta to the south. Athens lay to the north, across the pennisula.

A little further south, at Sparta, she had titles that suggest a very wide domination: Argeia (of Argos), Hypercheiria (“Whose hand is Above”) and Aphrodite, making her a goddess of sovereignty, protection and love/fertility. Most likely the Samians and Argives also saw Hera as a goddess of wide powers, given how important her cult was.

I mentioned that the Heraion at Samos had a long history, and by the Archaic Period it was one of the wealthiest in Greece, with pilgrims coming from the Near East, Egypt and Anatolia. (Averette: 57) Its earliest form was an open-air shrine with several altars and perhaps a sacred tree, but later it took the form of a temple, stoa and altar in stone.

The tree was probably a lygos, the chaste-tree, because according to local myth Hera was born under a lygos at Samos. During the Toneia or “binding” festival her statue was moved out of the temple to the beach and purified, with barley cakes set next to it, but the festival got its name after the statue was once stolen, and then bound tightly on its return with chaste-tree branches. Samian coins featured this tree right up until Roman times.

Numerous figures of women with outstretched arms have been excavated there, probably votives representing the pilgrims who came in such large numbers.

Another Heraion, at Argos, dates to the 8th century BCE as well, and another kind of terracotta figurines, probably representing Hera herself, have been found there. Dating from the 7th century BCE, these depict a seated goddess wearing a headdress. (Hera is frequently described as seated on a throne, often golden, and crowned.) At Tirynis, a wine-cup marked ERA (Hera) and kraters marked AΘANAIAΣ EMI (I belong to Athena) suggest that both goddesses had a cult there. (Barford: 94)

A variation on this figure has flowers on her shoulder along with the usual breastband. These may represent the garlands of a kind of flower called asterion, which people dedicated to the goddess at the Heraion of Argos. People also presented clay wreaths, perhaps a more lasting gift to the goddess. (Barford: 98)

Argos occupied a strategic location, as well as being surrounded by fertile plains, and was a major centre by Mycenean times. It was associated with Hera right from the beginning, as its founding myth shows:

Ascending to Tretus, and again going along the road to Argos, you see on the left the ruins of Mycenae. The Greeks are aware that the founder of Mycenae was Perseus, so I will narrate the cause of its foundation and the reason why the Argives afterwards laid Mycenae waste. The oldest tradition in the region now called Argolis is that when Inachus was king he named the river after himself and sacrificed to Hera.

There is also another legend which says that Phoroneus was the first inhabitant of this land, and that Inachus, the father of Phoroneus, was not a man but the river. This river, with the rivers Cephisus and Asterion, judged concerning the land between Poseidon and Hera. They decided that the land belonged to Hera, and so Poseidon made their waters disappear. For this reason neither Inachus nor either of the other rivers I have mentioned provides any water except after rain. In summer their streams are dry except those at Lerna. Phoroneus, the son of Inachus, was the first to gather together the inhabitants, who up to that time had been scattered and living as isolated families. The place into which they were first gathered was named the City of Phoroneus.

Argus, the grandson of Phoroneus, succeeding to the throne after Phoroneus, gave his name to the land.
(Pausanias, Description of Greece 2.15.4 – 16.1)

Poseidon was often in dispute with other deities over cities: he tangled with Athena over Athens, and lost that one too. He and Hera managed to get along despite this; the Gamelion festival in Athens was a sacrifice offered to Hera and Zeus at her temple, with an offering to Poseidon as well.

The Happiest of Men

Finally, since Hera is famous for persecuting Hercules and Achilles (although she favoured Jason), I thought I would pass on this story of two athletes, Kleobis and Biton, and how they won favour with Hera and fame in Argos:

They were of Argive stock, had enough to live on, and on top of this had great bodily strength. Both had won prizes in the athletic contests, and this story is told about them: there was a festival of Hera in Argos, and their mother absolutely had to be conveyed to the temple by a team of oxen. But their oxen had not come back from the fields in time, so the youths took the yoke upon their own shoulders under constraint of time. They drew the wagon, with their mother riding atop it, traveling five miles until they arrived at the temple. When they had done this and had been seen by the entire gathering, their lives came to an excellent end, and in their case the god made clear that for human beings it is a better thing to die than to live. The Argive men stood around the youths and congratulated them on their strength; the Argive women congratulated their mother for having borne such children. She was overjoyed at the feat and at the praise, so she stood before the image and prayed that the goddess might grant the best thing for man to her children Cleobis and Biton, who had given great honor to the goddess. After this prayer they sacrificed and feasted. The youths then lay down in the temple and went to sleep and never rose again; death held them there. The Argives made and dedicated at Delphi statues of them as being the best of men.”
(Herodotus, The Histories, 1.31, trans. A. D. Godley) 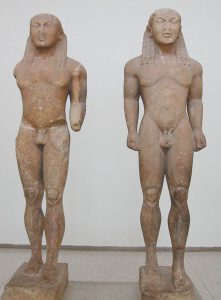 The twin statues by Polymedes of Argos, conventionally known as “Kleobis and Biton”. Wikimedia.

Hera was a goddess of much more than marriage. In the northeast Peolopennese she was the patron of the city of Argos and protector of the whole region. Even her choice of side in the Trojan war reflected this, as she sided with the Greeks, and used her own trickery to make sure they won. She was the queen, Basíleia, and the Argive goddess, Argéia.

9 thoughts on “Hera: the goddess alone”