Two stories about Apollo, one well-known and one obscure, focus on white ravens. Odin sent out ravens to learn what was going on in the world, but Apollo’s white ravens also brought messages to humans, as servants of the god of oracles. The one occasion when a raven brought him news ended very badly indeed.

Apollo, Coronis and the Raven

Briefly, Apollo fell for the Greek nymph Coronis, a Thessalian princess, and got her pregnant. She then was unfaithful to him with a mortal, which was unwise. A raven told Apollo the bad news, and he killed her. He rescued the unborn boy, however, and took him to the centaur Chiron, who knew the arts of healing, to rear.

The boy grew up to be the healer-god Asklepios, who in his turn offended the gods by reviving the dead, and was killed by Zeus, despite Apollo’s intercession.

The story has been told in a number of ways, but a fragment of Hesiod (understandably short, perhaps) gives the gist of it:

To him, then, there came a messenger from the sacred feast to goodly Pytho, a crow, and he told unshorn Phoebus of secret deeds, that Ischys son of Elatus had wedded Coronis the daughter of Phlegyas of birth divine. (from the Catalogues of Women Fragment 89, trans. Hugh Evelyn-White)

Most versions focus on Coronis’ adultery and tend to moralize about her behaviour (as well as being astonished by the folly of angering a notoriously short-tempered god). Ovid’s version, however, also points a moral about the tale-bearing raven:

These peacocks had only recently been painted, when Argus was killed, at the same time that your wings, Corvus, croaking Raven, were suddenly changed to black, though they were white before. He was once a bird with silver-white plumage, equal to the spotless doves, not inferior to the geese, those saviours of the Capitol with their watchful cries, or the swan, the lover of rivers. His speech condemned him. Because of his ready speech he, who was once snow white, was now white’s opposite. (Ovid Metamorphoses 2: 531 ff)

Going back to Odin, we know that he feared for his ravens, that they might not return to him. (Grimnismal 20) In Apollo’s case, it’s the ravens who should have been nervous. (See the section on constellations for more punished ravens.)

Pindar, a 5th century Greek poet, leaves out the messenger in favour of Apollo’s own power as the oracular god:

Even in Pytho where sheep are sacrificed, the king of the temple happened to perceive it, Loxias [Apollo], persuading his thoughts with his unerring counsellor: his mind, which knows all things. He does not grasp falsehood, and he is deceived [30] by neither god nor man, neither in deeds nor in thoughts (Pythian Ode 3: 26ff)

But there is a connection, because Apollo had declared in an oracle to the Boeotians that they should settle where they saw white ravens. When they saw ravens that some boys had covered in chalk, they settled down, and called the place Korakes, Crows.

Another version of the story says that the Boeotians were told to leave their homes when the saw the birds, and the youths who had precipitated this crisis had to flee to Korakes, for obvious reasons. (This is a recorded oracle, no. 6-3-2: When white ravens appear, the Boeotians will lose their country.)

White ravens also appeared in other oracles. Among the Magnesians who settled on Crete, those who lived between Phaistos and Gortyn were told to come home when they saw white ravens. They did, but then the Oracle at Delphi told them to go to Asia instead, where they founded Magnesia on the river Meander in modern Turkey.

The part about the chalk is obviously an attempt to explain the birds’ colour, although apparently white ravens and crows are not unknown. (See links at the end for more on white corvids.) Black-and-white birds are more common, but all-white animals do occur, and the genetics are predictable enough for breeders to be able to plan for white birds.

(Fun fact: Aristotle observed that ravens could turn white, but that white animals never turn black.He also noted that many such changes are seasonal.)

The constellation Corvus, with the Crater beside him. From the site Germanic Astronomy.

As is the habit of repentant deities, Apollo made up for his rage by placing either his former lover or the newly-blackened bird in the sky as a constellation. The consensus is that the figure is a raven or crow, since the Latin Corvus means “raven”, but since the most distinctive part of the constellation is a rhombus of four stars known as the Sail, or Spica’s Spanker, it could be anything.

Pseudo-Hyginus, who complied the Astronomica, offers two different ideas about the constellation. First, that it was Coronis herself, placed among the stars after the god’s wrath had cooled. Since Coronis’ name means either “curved one” from korônis or else “crow” from korônê, it seems likely that she was supposed to be the crow in the sky.

Pseudo-Hyginus’ second story is completely different, but it has familiar elements. The crow was sent to get water for Apollo’s libations, but delayed so it could wait for some figs to ripen in the sun. The god punished it by placing it next to the Serpent in the heavens, who keeps it from drinking from the Crater. (This may be the myth referred to in the image of Apollo below.) 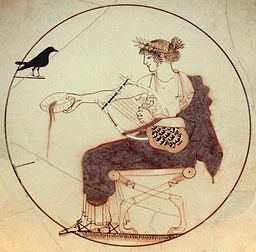 Apollo holding a lyre and pouring a libation, accompanied by a black bird. From a tomb at Delphi. Wikimedia.

Any cult of Coronis was probably connected to her famous son, Asklepios. She had statues in several of his temples, like many other mothers of heroes and demi-gods. Pausanias, in his Description of Greece, mentions one at Titane with its own rituals:

“[In the sanctuary of Asklepios (Asclepius) at Titane in Sikyonia :] There is also a wooden image of Koronis (Coronis), but it has no fixed position anywhere in the temple. While to the god are being sacrificed a bull, a lamb, and a pig, they remove Koronis to the sanctuary of Athena and honor her there. The parts of the victims which they offer as a burnt sacrifice, and they are not content with cutting out the thighs, they burn on the ground, except the birds, which they burn on the altar . . . In Titane there is also a sanctuary of Athena, into which they bring up the image of Koronis.” (2. 11. 7 – 12. 1)
[N.B. Pausanias does not say what type of bird was sacrificed to Asklepios. The removal of the statue of Koronis perhaps suggests ravens or crows. Although the usual bird offering to the god was the rooster, cf. Plato.]

The note refers to the scene on Socrates’ deathbed, when he requests Plato and his other followers to sacrifice a cock to the god for him.

PS – The internet inspired this post, specifically several sites and blogs that said the raven was Apollo’s messenger. I’m not sure this is true, not like Iris was the messenger of the gods. They were the fulfillment of an oracle, which may explain their unnatural colour.

PPS – The featured image at the top is by Whiteraven90 on deviantart.

3 thoughts on “White Ravens and Apollo”