The Erinyes, to give them their Greek name, were avengers, who punished murders and other serious crimes, especially crimes against the family. Blood, both in the sense of blood spilled and kinship, was their concern.

They were born out of an outrage against kin: when Kronos and his brothers rose against their father Ouranos, and cut off his genitals with a sickle, the blood that fell on Gaia, Mother Earth, gave birth to Erinyes, as well as the Giants and oddly, a group of nymphs (the Meliae).

As Hesiod describes it:

And not vainly did they fall from his hand; for all the bloody drops that gushed forth Earth received, and as the seasons moved round [185] she bore the strong Erinyes and the great Giants with gleaming armour, holding long spears in their hands and the Nymphs whom they call Meliae all over the boundless earth.
(Theogony 184ff, trans. Hugh G. Evelyn-White)

A few others, like Ovid and the tragedian Aeschylus, make Nyx their mother, and the Orphics saw them as the children of Hades and Persephone. (The Lord of the Dead, unlike his brothers, had no children in most Greek myths.)

The Myceneans (a pre-Greek civilization) saw Erinus (singular) as a goddess, listing her along with Atana Potnija (Athena), Eluthia (Eileithyia), Paiawon (Apollo), and the Mistress of the Labyrinth, Potnija Dapurito. Tablets in the Linear B language list her alongside the others without making any distinction, and one records offerings of oil to all of them. 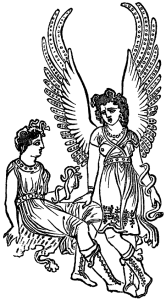 Two Furies, from a nineteenth-century book reproducing an image from an ancient vase. Wikimedia.

The tragedies, including Aeschylus‘ Eumenides, or KIndly Ones (a euphemism) make the Erinyes into snaky-haired, evil-looking creatures. Aeschylus’ play supposedly made women miscarry from fright, which sounds like great box-office. He compares them to the Harpies, who stole Phineus’s food and shat on what they could not carry, and goes on:

…these are wingless in appearance, black, altogether disgusting; they snore with repulsive breaths, they drip from their eyes hateful drops; their attire is not fit to bring either before the statues of the gods or into the homes of men.
(Eumenides 50-4, trans. Herbert Weir Smyth)

By contrast, when Pausanias was compiling his guide to Greece, he remarked about an Athenian shrine to the Erinyes he visited:

Hard by is a sanctuary of the goddesses which the Athenians call the August, but Hesiod in the Theogony calls them Erinyes Furies. It was Aeschylus who first represented them with snakes in their hair. But on the images neither of these nor of any of the under-world deities is there anything terrible.
(Pausanias, Description of Greece 1. 28. 6 (trans. Jones))

(The Athenian shrine had its own priestesses, the Hesykhides, who burned honey cakes to the Erinyes, a surprisingly benign offering.) For the Roman writer (and lawyer) Cicero, the shrine was proof that the Eumenides (as he called them), must be deities as well, like Hecate. The shrine also had images of Pluto, Hermes, and Gaia, underlining the chthonic nature of the Erinyes, who lived in Hades.

Other shrines and oracles dotted about Greece, including Megalopolis in Arcadia, were dedicated to them as well. At Sicyon worshippers gave offerings of a pregnant sheep, along with honey mixed with milk, while at Argolis votive steles to the Eumenides witness to their worship.

Both Homer’s Odyssey and Aeschylus‘ play refer to them as theai, goddesses (Homer mentions only one, thea), and it seems that she/they were also goddesses to the Greeks. One of their titles was Semnai Theai, August Goddesses, especially at Athens, showing respect without uttering the dread name.

At Telphousia in Arcadia (southern Greece) Demeter took on the form of a Fury in the cult of Demter Erynis. The story behind it was that while Demeter was searching for her daughter, Persephone, she caught the eye of the sea-god, Poseidon. She changed herself into a mare and hid with other mares in a field, but Poseidon simply changed into a stallion and had his way with her. (Poseidon was also the god of horses – it wouldn’t have been hard for him to spot the ringer.)

Demeter then gave birth to a mysterious daughter, Desponia, and a son in the form of the super-fast horse Arion. The name Desponia means Mistress, and she was the centre of a mystery cult at her shrine near Lykosura. Demeter’s wrath led to her title Erynis, furious. A statue of her from nearby Phigaleia showed her with a horse’s head and snaky hair, holding a dolphin and a dove. (Dusky turtledoves were sacred to the Erinyes.)

There was also a nymph Telphousia who gave her name to the spring on Mount Telphousia in Boetia, central Greece. She tried to trick Apollo into building a shrine for her, but he buried her in stones instead. The Erinyes also had a shrine there, an oracle, perhaps because the seer Tiresias was said to have died there after drinking the water.

Telphousia and the war-god Ares were the parents of Drakon, the giant serpent who guarded the Ismenian spring in Boetia. (His were the teeth that warriors sprang from when they were sown in the earth.) The connection with Ares and snakes suggests that she was also a Fury, and Telphousia was sometimes used as a name for Demeter Erinyes , but that seems strange for a nymph.

Athena and the Erinyes

The Erinyes are best known these days for their part in Aeschylus’ tragic cycle The Orestia. Briefly, when Agamemnon returns from the Trojan War his wife and her lover murder him. (He sacrificed their daughter, Iphigenia, to get a wind for their ships at the beginning of the war.) Orestes, their son, and their other daughter, Electra, then kill the lovers, but Orestes is pursued by the Furies for his crime.

The third play, The Eumenides, or the Kindly Ones, is about how Apollo and Athena try to break this cycle of violence. The Furies track Orestes to Apollo’s temple, following the reek of blood that they detect on him. Apollo can only stay their vengeance by putting them to sleep, but Athena sets up the first jury trial to judge Orestes’ crime. She casts the deciding vote after the jury is hung, deciding for mercy instead of vengeance.

The Erinyes, balked of their legitimate prey, threaten to ravage Athens, but the goddess promises that the Athenians will honour them under their new name, the Eumenides. (As I mentioned above, there was an actual shrine to the Eumenides in Athens.)

Athena, in fact, has a lot in common with the Erinyes: both are virgins, born of a single mother (Metis, Nyx), associated with snakes, possibly chthonic (Athena as goddess of Athens), and interested in justice in their different ways. Athena, an androgynous goddess, acts as a bridge between the vengeance of the Furies and the justice of Zeus. She brokers a deal with the Erinyes to give them recognition and honour.

In reality, of course, the Erinyes had been honoured for a long time, so the play was more about how an old cult was rationalized as part of a new order, with the goddess of Athens legitimizing the continued worship of these archaic deities.

The Romans gave the Erinyes the name by which we know them: Furiae, the Furies. It was the Romans, too, who gave the Furies a number, three, and individual names: Tisiphone (Avenger of Murder), Megara (Jealous Rage) and Alecto (Unceasing). Nemesis was sometimes counted as a Fury, probably because their functions overlap. (Plutarch mentions another, Adrasta, but since Nemesis was also called Adrastea, they’re probably the same.)

Dirae was another name for the Furiae, from the Latin word “terrible”.

An obscure Roman goddess, Furrina, was occasionally counted among the Furies, probably because of her name. She had a sacred grove at the foot of the Janiculum Hill in Rome, with a spring. Adkins and Adkins (90) think she was a goddess of that spring, or perhaps springs in general.*

Although the Erinyes may have had their origins in the curses called down by the wronged, they also protected the weak against the powerful, and punished those who broke oaths or swore falsely, so they had an ethical dimension as well. In The Eumenides, they are propitiated at the end so they will promote the fertility of marriages and the land, rather than blight it. Like many underworld beings, they were powerful for good or ill.

* The Romans, whose attitude towards religion could be very conservative, kept up her cult, with its festival (the Furrinalia, July 25th) and its own state priest (flamen) even though no one was sure what exactly she was goddess of by the time of the Republic.

The image of the torches at the top is by barthelskens, courtesy of PIxabay.

6 thoughts on “The Avenging Furies”