It’s a well known fact that the Celts – and later the early Christians – in Ireland were extraordinarily creative people, regularly expressing their philosophies, beliefs and histories through art. At first this was done through stone carving, metalwork and most likely wood. Celtic society revolved around the concepts of war and wealth, so they spent much of their time creating intricately decorated weapons and jewellery from bronze and gold, to show off their fighting prowess and status in society. They were also a highly spiritual society with an astronomical and seasonal calendar, various ritualistic festivals throughout the year, and revered burial practices. At sites where these ceremonies took place stone monuments were very common and often featured elaborate carvings, sculptures and the like.

And here for the image at the top

Most of us have heard the romantic story of how a new Celtic goddess, Senuna, was discovered after nearly 2000 years by amateurs with metal detectors. Twenty-six pieces of gold and silver had been deposited in a pool at Ashwell, UK, presumably from a nearby shrine, where they had been been offered to the goddess.

END_OF_DOCUMENT_TOKEN_TO_BE_REPLACED

Remarkable new archaeological discoveries are beginning to suggest that Stonehenge was built at a time of particularly intense religious and political rivalry. Just two miles north-east of the World Heritage site, at an important archaeological complex known as Durrington Walls, archaeologists have just discovered what appears to have been a vast 500-metre diameter circle of giant timber posts. The find is of international significance.

Volunteer archaeologists have unearthed a miniature bronze figure of a Roman goddess from Arbeia Roman Fort in South Shields. Helpers from the WallQuest community archaeology project and the Earthwatch Institute dug up the figure of the goddess Ceres which is thought to be a mount from a larger piece of furniture. Ceres was the goddess of agriculture, grain and fertility. Arbeia was a supply base where thousands of tons of grain were stored in granaries to feed the army stationed along Hadrian’s Wall. This is the second goddess that the WallQuest project has found at Arbeia in two years. In 2014, a local volunteer found a carved stone head of a protective goddess, or tutela.

If Freyja wept tears of gold, we would expect them to be the colour of the drops above, right? However, in the Prose Edda, Snorri describes them as “red gold”, rauðr gull. (Gylf. 46) Was this just poetic license, or was gold different in the Middle Ages?

END_OF_DOCUMENT_TOKEN_TO_BE_REPLACED

As part of a new documentary, a team of archeologists has found some evidence of a second Viking settlement in Newfoundland. 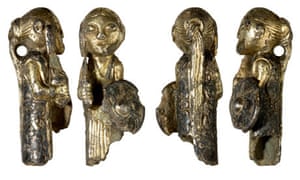 Source: Flight of the valkyrie: the Viking figurine that’s heading for Britain | Culture | The Guardian

As curator of the Celts exhibition, I got to spend a lot of time showing people wonderful Iron Age treasures. Some of my favourites were the big metal neck rings called torcs that were worn across much of Europe (and beyond) around 2000 years ago. One of the things I was asked most often is, ‘But how did you put them on?!’ It’s a very good question, seeing as they often look like solid metal rings with nowhere near enough space to squeeze your neck through.

As curator of the Celts exhibition, I get to spend a lot of time showing people wonderful Iron Age treasures. Some of my favourites are the big metal neck rings called torcs that were worn across much of Europe (and beyond) around 2000 years ago. One of the things I get asked most often is, ‘But how did you put them on?!’ It’s a very good question, seeing as they often look like solid metal rings with nowhere near enough space to squeeze your neck through.

Many British torcs are a bit like this one:

Although this is one of the most famous examples, the form is typical: open at the front, with a flexible…

I have been following the goddess Brigantia for some time now. I remember in 2009 a new inscription dedicated to Brigantia surfaced. (It had been previously mistranslated, but the new R.I.B. changed that.) It had been read as a dedication to the Terra Batavorum, but now it is read as Tutela Brigantia Augusta (Guardian Brigantia Augusta).

Now, however, we have a new image of the goddess, found in South Shields (near Newcastle). She still has traces of pink paint on her face, and red on her lips. So far all that has been found is her head, which is thought to date back to the second century CE (like the other dateable evidence for her cult).

Head of Brigantia statuette. Photo from the Daily Mail.

Brigantia as guardian is apparent in both image and inscription, as the little head wears the mural crown, which indicated that a goddess was the protector of a city or territory. The famous image of Brigantia from Scotland also has a mural crown worn outside a Minerva-like helmet.

The new image of Brigantia was found at the old Roman fort of Arbeia, not too far from another altar discovered long ago. It will be exciting if they find the rest of the little image of Brigantia, but as this find and the dramatic find of Senua earlier show, the book on Roman Britain is still being written.