Nantosuelta was a Gaulish goddess, although traces of her worship have turned up in Germany, Luxembourg and Britain. She can be identified by the little house that she often carries, which looks like a birdhouse on the end of a long pole.

No other deity carries it, so we always know it’s her when we see it. No one really knows what it is supposed to represent – perhaps she was a goddess of home and hearth?

She also carries a small pot or else a beehive (she sometimes has a honeycomb). Like many other goddesses, she sometimes carries the patera or offering-dish. Her sometime consort Sucellus carries the pot, as well as his distinctive attribute: the long-handled hammer.

Another image of Nantosuelta, from Sarrebourg, shows her with her house-on-a-pole in one hand and what might be a beehive in the other, on which a raven perches. Several honeycombs are piled next to her. Of the five depictions discussed in Green (157), three have ravens, so they must have been important to her cult. 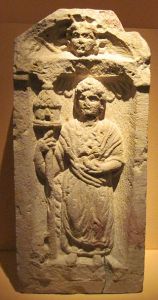 The raven, usually associated with war-goddesses in Ireland and elsewhere, has a rather different symbolism. The Irish goddesses Nemain, Macha, Morrigan and Badb were associated with crows and ravens.

An inscription in Gaul, in the Haute-Savoie, to (C)athubodva, “Battle Raven” and another from Germany with the name Cassibodua suggests that the Continental Celts also had their battle-goddesses. (Ross: 282)

On the other hand, whether we read Nantosuelta’s little house as a dwelling or a dovecote, it clearly has a homely connotation. It would be an interesting variation on the dual nature of many Celtic goddesses, if Nantosuelta had the raven and dove as symbols, linking her to both war and peace. (Ross: 313)

It is hard to reconcile this with the usual interpretation of her name: “Winding River”, or “Meandering Brook”. Another school sees her name as coming from the Indo-European root *swhel– “swelter”, and would connect her to the sun and fire, but that doesn’t get us any further. She doesn’t seem to have any curative properties, and her associations all seem to be domestic.

If her name can be translated as “Sun-Warmed Valley”, however, then she would be both solar and domestic. She might be a domestic goddess like Frigga and Brigit, who are goddesses of the household. (Karlsdottir: 54) (Of course, Frigga and Brigit had an uncanny side, since Frigga was a prophetess and Brigit was goddess of smiths and poets.)

She often appears with her consort, Sucellus. He is a bearded god with a long-handled hammer as his attribute. His name means something like “the Good Striker”, which certainly tallies.

As well as his hammer, he often carries a bowl or pot, a reference to his role as wine or beer god. (Or, given Nantosuelta’s honeycombs, mead.) In southern Gaul his pot becomes a barrel, a reference to the wine industry there.

In Roman times he was associated with Silvanus, a wilderness god. He sometimes has a dog curled at his feet, which may indicate that he was a hunter’s god, or perhaps he also had an underworld role. Like Nantosuelta, he was popular in both Gaul and Britain, and little votive hammers attest to devotion of his followers.

Since Sucellus is often depicted as a mature, bearded man with a pot, he is often linked to the Irish Dagda, who had a cauldron of plenty and a magical club. Among the women in his life was the fearsome goddess the Morrigan, whose symbol was the raven. She was a goddess of war, but had a fertility aspect as well. You could not by any stretch call her domestic. The Morrigan, too, is associated with rivers, and coupled with the Dagda while standing astride one.

Which takes us as far from domestic comfort as it is possible to get. However, the Morrigan is a deliberately extreme deity, and it might be better to see Nantosuelta as like the Dagda himself; no stranger to magic and otherworldly doings, but mainly concerned with plenty and peace.