Julius Caesar wrote that the Gauls believed they were descended from Dis Pater. In his writings, he did not give the local names for his deities, substituting ones his readers would recognize. (This was the interpretatio romana, giving foreign deities Roman names and attributes.)

Dis was originally the Roman god of wealth, fertile soil, and underground riches, who became equated to Pluto, Orcus, and Soranus. The question is, what Gaulish god reminded the Divine Julius of Dis?

All the Gauls assert that they are descended from the god Dis, and they say that this tradition has been handed down by the Druids. For that reason they compute the division of every season, not by the number of days, but of nights; they keep birthdays and the beginnings of months and years in such an order that the day follows the night.
(De Bello Gallico VI: 18, trans. W. A. McDevitte and W. S. Bohn) 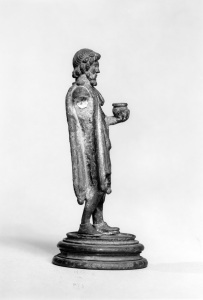 Dispater or Celtic Zeus, from the Walters Art Museum.

It would have to be a god who had a paternal aspect, as well a wealth-giving god: Dis is short for Latin dives, riches, and pater obviously means “father”. Various writers have offered Cernunnos, Teutates, Sucellus, and Silvanus as answers. (Two Irish god, the Dagda and Donn, are also candidates – I will discuss them below.)

Cernunnos is the favourite of Anne Ross and Phyllis Fray Bober, since his posture, seated on the ground, cross-legged, and his ram-headed snake suggest an earth-god. On the Reims altar he has what looks like a sack of coins, suggesting riches.

Teutates‘s name simply identifies him as a tribal god, which would be appropriate for the father of all, but many have thought his name was a title, like the Norse Freyr, whose name mean “Lord”. If “Teutates” is a title, then we’re left with the question of which god it applied to.

Sucellus was the god with the big hammer and barrel, presumably a god of plenty. But two German images of him include a raven and a three-headed dog. The three-headed dog is how you tell Hades from Zeus or Poseidon, along with the staff or bident he carries for driving dead spirits like sheep. The raven and dog were both chthonic animals in Celtic mythology as well.

Silvanus is a little more difficult, because once again we have a Celtic god masquerading under a Roman name. He often appears as a variant form of the Celtic hammer-god, with his hammer and pot, a leafy wreath on his head, and a wolfskin cloak.

In the form of Sucellos Silvanus he protected the wild places, as well as vineyards and pastures. (Tiny wooden hammers were offered to him, reminiscent of the hammers worn by followers of Thor.)

Also, while the few images we have of Dis Pater are from Germany or northern France, Silvanus Sucellus is found mainly in the south of France. His cult was also popular among brewers and vitners, which is why he carries a pot so often.

Many inscriptions to Sucellus Silvanus have been found in mines and quarries, which makes him both a god of the earth’s wealth, and a patron of the working class and slaves. (Somebody had to dig the stuff out.) Sucellus, the Good Striker, may also have been a smith-god, which would explain the hammer. 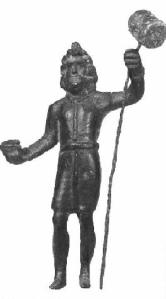 Bronze image of Sucellus from France.

While Sucellus’ hammer was a symbol of his might and his role as patron of workers, Dis Pater’s was not always put to such elevated uses. Tertullian, a father of the early Church, had a different take:

We have laughed at the sport of your mid-day game of the gods, when Father Pluto, Jove’s own brother, drags away, hammer in hand, the remains of the gladiators; when Mercury, with his winged cap and heated wand, tests with his cautery whether the bodies were really lifeless, or only feigning death. (Ad Nationes I:10:47)

Two slaves dressed as Dis Pater and Mercury attended fallen gladiators: “Mercury” prodded them with his heated caduceus to test whether they were really dead, and then “Dis Pater” dragged them away, and their blood was offered to Jupiter Latiaris. (Guttman: 13)

Death, the underworld, and the sea

Caesar was writing of the Gauls when he mentioned Dis Pater. However, two Irish gods are commonly mentioned as possibilities for Dis Pater: the Dagda and Donn. The Dagda qualifies because of his title Allothair, Father of All, and his association with riches and plenty.

Donn was the god of the dead, often confused with the Dagda. One legend about him says he was the first of his people, the Milesians, to die, which makes him an ancestor-god. At any rate he was, as MacKillop says, “an aloof, retiring deity” who preferred to stay on his island. (Another tradition has it that he came from Spain, a euphemism for the land of the dead.) Christian tradition turned Tech Duinn into a sort of Staten Island of souls, where they might linger before going to Hell.

Donn is only one of the many Irish death-gods. (He has staying power, though; until recent times he was associated with shipwrecks and other marine disasters.) Tethra, who ruled the otherworld and whose name was glossed as “sea”, and Donn’s grandfather, the Fomorian king Beli, were others. (MacKillop doesn’t accept that Beli is a death-god, but says he resembles Dis Pater. He sees Beli and the Welsh ancestor-god Beli Mawr as overlapping. Presumably it is the ancestral aspect that connects all three.)

Dis Pater was sometimes associated with a goddess, Aerecura. They appear together in a couple of places, with her taking on Proserpine’s attributes. An altar from Salzbach near Carlsruhe (Germany) shows both seated, the god holding an unrolled scroll, the goddess a basket of fruit. An inscription on the supporting block (socle) reads: I(n) h(onorem) d(omus) d(ivinae) d(eae) s(anctae) Aericur(ae) et Diti Pat(ri) Veter(ius) Paternus et Adie(ctia) Pater(na). (A map of sites where inscriptions to this goddess were found is here.)

Another, from Varhely in Roman Dacia, does not identify them, but the god is accompanied by the three-headed dog Cerebus, while she holds a key. A lead curse tablet from Bregenz (Lake Constance) mentions Ogmios as well as Dis Pater and Aerecura. She is associated with Silvanus in the Rhine Valley. (See here for two images of Aerecura.)

The cult of Aerecura and Dis Pater is similar that of Nantosuelta and Sucellus, but geographically distinct. There is a difference of opinion as to whether the two couples were the same deities, or two different couples with similar functions of propserity and benevolence. Nantosuelta in particular has very specific attritbutes that Aerecura does not share, so it seems unlikely that they were the same goddess. The Celtic pattern of local godddesses of the land also would argue against the two being identical.

Several inscriptions to Aerecura come from gravesites, which Nantosuelta’s don’t, but suggest that Green was right in saying that she was like Hecate. (As does the key.)

The meaning of her name is unclear. It may be connected to Latin aes, aeris ‘copper, bronze, money, wealth’, era ‘mistress’ or the name of the Greek goddess Hera. (It may not even be Indo-European.) Beck, on the other hand, mentions derivations from *Ēri-cūrā, ‘Wind of the West’ (Delmarre) and “Before the Bread”, from *kueru– signifying ‘grind, mill, flour’ (Olmstead).

If her name meant something like “wealth” or even signified valuable metals that would connect to both Dis Pater and Sucellus, while anything to do with grain would also fit with a god of prosperity and the earth.

Most likely Dis Pater and Sucellus were similar gods, or at least filled similar needs. Whether Sucellus was the god Julius Caesar had in mind, or whether Cernunnos or Teutates filled that role, we’ll never know. The future emperor’s attempt to clarify Gallic religion has left us puzzled.