We are used to the idea that the Celts took up Roman gods and equated them with their own. (Or that the invading Romans renamed them.) However, the process could just as easily go the other way.

The best-known instance of this is the Gaulish horse-goddess Epona, who became very popular first with the cavalry units of the Roman army, then with the Roman populace, who took her into their homes and stables. She was the only Celtic deity with a holiday in the Roman calendar: December 18th. The Romans don’t seem to have had an indigenous horse-deity (except perhaps Neptune, who had other things to attend to), but the Celts were horse-mad.

They even named themselves for horses: the British queen Cartimandua (Sleek Pony), the many Irish kings named Eochaid (Horse), as well as the Gaulish Epomeduos (Horse Sacrifice[r]).

Epona is a very well-attested deity, with shrines and altars all over Europe. Her name, like Damona’s, is a noun made into a title: epos, horse, with the suffix -ona making it a name. Her cult centered on Gaul and the Rhineland, including the Aedui and Lingones tribes of Burgundy (famed for their horse breeding) and the Mediomatrici and Treveri of east Gaul. After the Roman cavalry adopted her, she appeared in Britain (as far north as the Antonine Wall in Scotland), Yugoslavia and North Africa. (Green: 90)

An ala, or cavalry unit, stationed at Pförring (Bayern), Germany dedicated an altar to Epona:

‘To the gods of the parade ground and to Epona, the first corps of equites singulares, pious, loyal, formed of Roman citizens and led by the prefect Aelius Bassianus, in fulfillment of a vow’.
(C.I.L. #5910 and #11909)

Many of her followers were from the military installations along the Rhine and Danube, but in Burgundy people venerated her in their houses or small shrines; the only attested shrine to her comes from there. The ruins of a temple at Entrains in Nièvre, had two dedications to her, one dedicating the place to the goddess. We know that people would put flowers and other small tokens in houses or stables for her, and many small figurines of Epona have been found, suggesting personal worship. 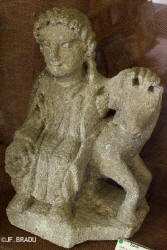 Images of Epona tend to come in two types: 1) from north-east Gaul and the Rhine area show her riding side-saddle on a horse, often with a foal, 2) while in images from central Gaul show her in the potnia theron pose, standing facing front with a horse either side of her. The German altar below manages to combine the two.

There are also some atypical ones, such as ones from the thermal springs at Allerey and Saulon-le-Chapelle that show her as a nymph. (MacKillop: 190) This would seem to be a case of function overriding form, just as the British goddess Brigantia went from an armed Minerva to a nymph when she was showing her healing aspect.

Altar to Epona, from the Wetteraumuseum. (Wikimedia)

Epona was a goddess of fertility, as she was often shown holding a basket of food or grain, or feeding a foal. The cult of the Matres seems to have overlapped with hers, as she appears with them in a 3rd-century dedication from Thil Châtel in Burgundy. (Green:92) and at Moselle she is shown in triplicate, as if she herself was the Mother-Goddess. One of her names was Atana, or Mother. (Rankine and D’Este: 153)

Her attributes include the mappa, or napkin, which was dropped at the start of horse races. (Green interprets it as a beginning of the course of a life.) She could also be shown with a key, to unlock the door to the afterlife. She appears on tombstones in south-west Gaul and also in the area around Metz.

A dog sometimes accompanies her, which could signify either healing or death, and once she is shown with the dog and a raven (Altrier in Luxembourg). She may well have been a psychopomp, leading the dead to their next life. (Hecate, the Greek goddess who could move freely between the worlds, had the dog and keys as her symbols.) 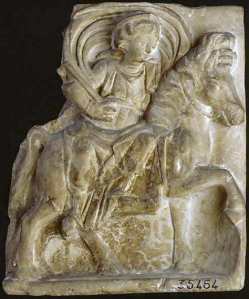 Horse-goddesses in Wales and Ireland often have a sovereignty aspect: Rhiannon, Macha, and Áine all are goddesses of the land and choose its rulers. Epona is sometimes referred to as Rigana or Regina, but it is not clear if that is a name of a separate goddess or a title of hers. (Rigana also has her own dedications from the same area.)

Rhiannon was a queen, of course, both in her own right as queen of the otherworld, and in this world through her marriage to the king Pwyll. Birds were anther attribute the two goddesses shared: the three birds of Rhiannon, from the Welsh Triads, can lull the living to sleep and wake the dead. And Rhiannon is able to move between the worlds, as a fairy-woman who marries an earthly king and later the god Manawdyn.

The Irish goddess the Morrigan is a darker version of the sovereign goddess, her name meaning “Great Queen”. Sometimes she is a triple goddess, with the horse-goddess Macha as one her aspects. She was a war-goddess who had three ravens that cause destruction, as well as having the crow or raven as one of her shapes.

Epona appears once with a raven as well as a dog, which is certainly suggestive of a death-aspect, although she and Rhiannon seem to have been more of guide to the afterlife (the key) than the means of sending people there. The Morrigan was married to the warrior-god Neit, just as Epona was often paired with Mars by her military followers. Other war-goddesses such as the Gaulish Cathuboda, for example, also had the horse and raven as their symbols. 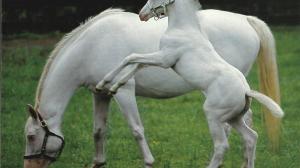 I want to finish with two quotes, one from the Roman writer Juvenal, and another from an inscription on a lead tablet found in a Gaulish shrine to Epona. They show two sides of her cult, the everyday presence of Epona’s image in a Roman stable, and the more refined devotion expressed in prayer:

[8.146] Driving flat out past his ancestors’ bones and ashesthere speeds fat Lateranus in his gig, himself, himself,locking the drag on the wheel, the Consul as muleteer!It’s night, but the moon can see him, the stars peer downas witnesses – and as soon as his term of officeis ended, why then Lateranus will flourish his whipin broad daylight, quite shamelessly, flick a cheerful saluteto respectable elderly friends as he passes; he’ll untrussthe hay-bales himself, and fodder his weary horses.But though he’ll sacrifice ‘a dun steer and eke a shearling’,as ancient ritual prescribes, he swears at Jove’s high altarby Epona, whose picture’s daubed | on the doors of his reeking stables.
(Juvenal Satires 6)

It was set up for you, Sacred Mother.
It was set out for you, Atanta.
This sacrificial animal was purchased for you, horse goddess, Eponina.
So that it may satisfy, horse goddess Potia; we pay you,
Atanta, so that you are satisfied; we dedicate it to you.
By this sacrificial animal, swift Ipona, with a filly, goddess Epotia
for a propitious lustration they bind you, Catona of battle,
with a filly, for the cleansing of riding horses
which they cleanse for you, Dibonia.
This swift mare, this cauldron, this smithwork,
beside fat and this cauldron,
mind you, moreover with a filly, Epotia, noble and good Vovesia.
(trans. by Garrett Olmstead, from the OBOD site.)

For all things Epona: Epona.net