Since the goddess Rosmerta often (not always) appears with the Roman god Mercury in both inscriptions and art, it is generally assumed that she is his consort, and the images that show her with his attributes indicate that he was the more powerful partner. There is a strong case to be made, however, for reading it the other way around. 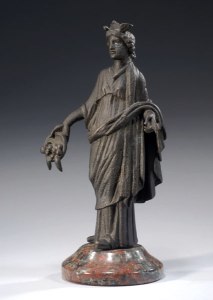 Rosmerta seems to have been a very popular goddess, as you might expect from a goddess called the Good Provider. Her cult reached from Germany to Britain. It was established on both banks of the Rhine, and in France along the Rhône, Meuse, and Moselle rivers. (Rivers being trade routes, perhaps her cult spread along with that of the merchants’ god, Mercury.) Her cult seems widespread across northern Gaul, both with consort gods Mars and Mercury, and by herself. In Britain she was popular among the Dubonni in the south-west, and in Gloucester.

The site Deo Mercurio thinks that Rosmerta’s role was to act as Mercury’s consort, making real his promise of prosperity and well-being. This seems to ignore the many times she appears alone, and also the fact that like other native goddesses paired with Roman gods, she had a cult of her own, rather than acting as the right-hand woman of an alien god. To put it in business terms, the goddess had the chain of stores, and the god tried to establish his brand with her customers.

Rosmerta is usually translated as “Good Provider”, or “Good Purveyor”. The elements would be *ro- (most) and *smert- (provider/carer), with a feminine ending. Two other goddesses, Cantismerta and Atesmerta, each known by a single inscription, have names similar in meaning: “providing together” and “providing again”, respectively. The Celtic god Smertrios, often paired with Mars, is also linked to Rosmerta, through the *smert element of his name.

Rosmerta was often shown with the patera, an offering-dish. She also sometimes carries a ladle, or a scepter. All three of these are pretty generic, although the patera at least reinforces Rosmerta’s name, showing that she was a giving goddess.

Having said that, at Escolives-Sainte-Camille (in Yonne), Rosmerta is shown with the patera and cornucopia, while the accompanying inscription links her to the emperor’s numen, or indwelling spirit. Not far away, at Gissey-la-Vieil (Côte d’Or), she had a spring, and the dedication links her to the numen again. It is noteworthy that only when she is alone is she associated with the numen.

Her unique attribute, though, was unidentified for a long time. It seems to be either a bucket or a milk-churn, and various explanations have been offered as to exactly what it might contain.

Marian Green (1999: 93) proposes that it is an old-fashioned dash churn for butter, which was commonly used until the 1700s. (This may not seem terribly interesting to us, but remember that farmland in Norway was assessed in terms of how much butter per acre, and that dairies had their own deities and folklore, just as smithies had.) In an economy where a person’s wealth could be reckoned in the number of cows they had, and their were-gild was computed (in Ireland) in cattle, it is not surprising that milk and milk products were an important part of both the economy and ritual.

Rosmerta and Mercury, a stone plaque in the Gloucester Museum.

The milk-churn would explain another of her attributes, the ladle or spoon she carries, which would be used to pour the milk into the tub, and fish the butter out afterwards. She combines the patera and tub in a sculpture from Gloucester, where she holds the patera over the wooden bucket or churn, and in her other hand a long staff with a head like an Inuit ulu. (Ross (272) describes it as a double-headed axe, but it looks more like an edger for a lawn.) Green (1995: 127) says the long staff is a sceptre, with a pelta-shaped head.

Some have seen a link between Rosmerta’s churn or bucket and the magic cauldrons so prevalent in Celtic mythology. These either are sources of inexhaustible plenty, or else they have the power of regeneration. The first certainly fits Rosmerta, and as we shall see, the death-and-regeneration theme may be part of her cult as well.

The Gloucester sculpture shows Rosmerta with Mercury, and the two were often paired, all across Europe. A temple was built for them by a freedman in Alsace, at Wasserburg, which would suggest a strong devotion. The two shared some similiarity of function, although Mercury was more specialized, having given his name to merchants. Rosmerta is occasionally shown with a purse, which suggests that she also looked after traders, or was a wealth-giving goddess.

If Rosmerta’s bucket/churn doubles as a magical cauldron, then Mercury’s role as psychopompos and traveller between the worlds means that they complemented each other in other ways as well. We know from Julius Caesar that Mercury was the most popular deity in Gaul, so it makes sense that he would be paired with such a a popular goddess.

Rosmerta sometimes goes so far as to borrow his attributes, usually the purse and/or caduceus, although once she appears with his winged hat as well, at Clermont-Ferrand. The two of them can be found together on reliefs and inscriptions throughout Germany and France. Mercury was a very popular deity with the Celts, who adopted him wholesale, without a by-name. Rosmerta’s taking of Mercury’s attributes, suggests that she could appropriate his powers, or shared them.

Rosmerta and Mercury, each with a caduceus.

The pairing of Rosmerta and Mercury is not obviously that of divine consorts, because Mercury often appeared with his mother Maia on Celtic monuments and inscriptions as well, leading some to speculate that Rosmerta was also seen as Mercury’s mother.

Rosmerta sometimes appears with Mars in inscriptions as well. Neither Mars nor Mercury ever has a Celtic name in these inscriptions, unlike Apollo Moritgastus, who was paired with Damona. She may therefore not had a Celtic consort, who would have taken a Roman name to go with his Celtic one.

Rosmerta sometimes appears with the goddess Fortuna; one image from Britain shows them with a torch each, Fortuna’s held upright, while Rosmerta’s is pointing downward. In Graeco-Roman mythology the down-turned torch indicated death, or the afterworld. (This may tie in with the cauldron motif, giving Rosmerta a death-and-rebirth aspect.) On a slightly more cheerful note, Rosmerta sometimes appropriated Fortuna’s cornucopia, the horn of plenty, or her rudder and globe (Green 1995: 127).

One inscription found on pottery at Lezoux in Puy-le-Dome, reads:

It could be read as a dedication to the goddesses Rigana and Rosmerta, or to the Queen and Goddess Rosmerta. The word Rigana would be cognate to the Latin Regina. (Olmstead: 362) There are no other inscriptions mentioning a goddess Rigana, but given the number of deities we only have one inscription for, that’s not conclusive.

The scepter I mentioned earlier as one of Rosmerta’s attributes might point to Rosmerta as a Queen-Goddess. There are male equivalents, such as Mars Rigas, Mars-the-King. Epona also has the title Rigana, and I will be discussing this title/name further in a post of its own.

If we take the view that Mercury, as a foreign god, was matched up with an established and powerful local goddess, it can be said that they at least had a lot in common. While Marian Green’s characterization of them as the success deities may seem a bit much, the spread of their cult over major river systems implies that merchants and traders were among their followers. In addition, both had fertility aspects, and both had an underworld aspect. However they came to be paired up, they seem to have had a successful relationship.

15 thoughts on “Rosmerta: not just a consort goddess.”