Although the name Damona means something like “Divine/ Great Cow”, the only image we have of her is in human form, and it has only survived in fragments: a stone head, crowned with corn-ears, and a hand with a serpent’s coils around it. It turned up in a votive pit at Alise-Sainte-Reine, ancient Alesia, the centre of her cult. It was originally painted, Roman-style, with the body painted white, the hair red, with a green diadem and yellow grain. 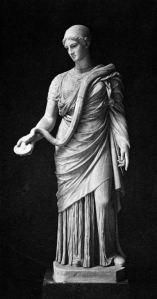 Hygeia, with her snake.

The snake suggests Hygeia, goddess of Health, whose father was Asclepius. She was often shown with a serpent in her arms, as in the picture above. (At some of Damona’s shrines, you could sleep in the temple and hope to dream of a cure, same as at a temple of Asclepius. Hopefully, snakes would not lick your ears.) The ears of wheat, on the other hand, suggest Demeter, the grain-goddess of the ancient Greeks, whose Roman form was Ceres.

The Alesian statue comes from the site of a temple to Apollo Moritasgus, based around a thermal spring. The Gauls had built their own shrine there, but the Romans replaced it with an impressive edifice complete with pools and porticoes where the sick might have slept. Pilgrims would bathe in the pool at their shrine, rather like modern-day Lourdes. (Moritasgus possibly means “seeking the sea“, or else “sea-badger”, meaning an otter or seal.)

There are 19 inscriptions dedicated to Damona, including nine from Bourbonne-les-Bains and four from Bourbon-Lancy. All of these pair her with a god, although Damona, a truly polyandrous goddess, took different consorts in different places, including the spring-god Borvo (Boiling) at Bourbonne-Lancy, and Abilus (possibly Mars Albiorix) at Arnay-le-Duc. At the latter another fragmentary statue of the goddess has been found, with a snake once again coiled round her arm.

She does appear by herself on an inscription from Aignay-le-Duc. It gives her the title deae Damonae Matubergini, which must be a local name as it doesn’t occur anywhere else. It is not clear what the latter title means, although Beck suggests either the High Favourable One from matu-, “good, favourable” or else Bear-Hill from matu– ‘bear’, with berg– meaing hill or moutain. (As in Bergusia and Bergonia, both goddesses of mountains.)

Damona’s name suggests she was a goddess of wealth and fertility as well as healing. (Cows represented wealth in those days – Brian Boru was called Bórama, “cow-countings”, meaning tribute.) Damona may be connected to the Irish goddess Boand, who also was a cow-goddess. The name Boand is thought to derive from Irish: bó fhionn (Old Irish: bó find) meaning “white cow”.

Boand was also associated with a well. This was the property of her husband, Nechtan, and it contained a specked salmon and was surrounded by hazel trees. (Both the fish and the trees were symbols of wisdom.) Only he and his three cup-bearers could take water from the well, but Boand broke the prohibition and the waters rose up and chased her all the way to the sea. The river this created, the Boyne, was named for her. So Boand’s well bestowed wisdom, whereas Damona’s water healed. (The story is told in the Metrical Dindshenchas.)

In other legends Boand was married to Elcmar. He isn’t important to the story except that when he left for a day, Boand and the chief Irish god, the Dagda, got together. The Dagda used his magic to stop time, so that nine months passed and Boand gave birth to Aenghus mac Oc, while for Elcmar only one day had gone by. (In another version of the story Boand was married to or the lover of another chief god, Nuada. Damona wasn’t the only polyandrous goddess.)

Another goddess with strong connections to cows is Brigid, who was also associated with curative waters. Images of the saint often show her with her cow, and the goddess Brigit had a magical cow, white with red ears, which is another way of saying it was supernatural. (There really are red-eared white cows, though. Check out this website, which also includes the legends.)

Irish legend also accounts for the many places with the element Bó- in the name with the legend of the three cows. They rose from the sea, and the first, Bó Dubh (black) went south, Bó Derg (red) went north, and the white cow, Bó Finn, went straight across. (I wonder if this has any connection to the Welsh Triads, which mention three prominent cows of Britain, but doesn’t give details.) There are numerous legends of magical cows in Celtic myth and folklore.

I can’t finish without giving details of one last white cow story, this time from the story of how Lugh came to be born. His grandfather, the monstrous Balor, learned in a prophecy that his grandson would kill him. So he locked away his daughter, Ethlinn, like the Greek Danae. Balor then saw the magical white cow Glas Gaibhnenn, which is one of the many fairy-tale cattle that give prodigious quantities of milk and seem inexhaustible. So he stole the cow. It’s owner, Cian, used magic to track down the cow, and had a tryst with Ethlinn, which resulted in the god Lugh. The cow drops out of the story, so we never find out how Cian got it home.

This cow is linked by some to Boand, and I suppose if you interpret its name as “white with green spots” it could be a form of her. (The other reading is “Goibniu’s Grey or Brindled (Cow)”, which is a little less suggestive.) The Wikipedia entry gives more legends of gray/white cows, including several lake and stream origin stories, which takes us nicely back to Damona, the cow-goddess of the sacred waters.

PS – The British goddess Verbeia is also connected to a river, the Wharfe, and her name may come from ferb, cow. Unfortunately Verbeia is only known from one altar (R.I.B. 635), so it’s unknown if she has anything else in common with Boand or Damona.

Green, Marian 1997: Dictionary of Celtic Myth and Legend, Thames and Hudson.
Green, Marian 1999: “The Celtic Goddess as Healer”, in The Concept of the Goddess, Sandra Billington and Marian Green, eds. Routledge.
MacKillop, James 2004: Oxford Dictionary of Celtic Mythology, OUP.
Oakley, G.T. Verbeia: the Goddess of Wharfedale, ebook.
Rankine, David, and Sorita D’Este 2005: The Guises of the Morrigan: Irish Goddess of Sex and Battle: Her Myths, Powers and Mysteries, Avalonia Press.

16 thoughts on “Damona: Divine Cow of the Sacred Waters”