We’ve all wondered what god Julius Caesar meant when he said that Mercury was the most important of all Gaulish gods. He was right in one sense, and wrong in another – there are many Gaulish Mercuries, and they have many different functions.

Mercury was a very popular god in Roman Gaul, as we know from the many images of him. We see him with Cernunnos and his older brother Apollo at Rheims and Vendeuvres, and with his sometime consort Rosmerta at Autun, Eisenberg and Paris. He often goes solo, with his winged hat, sandals and caduceus to identify him.

But while some scholars have sought to identify Mercury with a similarly universal deity, possibly a form of the Irish god Lugh, the answer seems to be rather different. There are many Gaulish Mercuries, many of them local and multifunctional.

These “Mercuries” were a mixed bag; everything from hunting gods to Mercury Victor, clearly some sort of war-god, along with some healing gods and a number of gods of particular places. Clearly Mercury was a versatile god, open to a number of interpretations. Some were clearly more Roman than Gaulish, and they are listed at the bottom.

I looked for lists of inscriptions on altars and other items to Mercury + (Gaulish god name) and then gathered together what information I could find about them. They may not have the kind of exciting backstory that the Irish god Lugh does, but they are all attested as deities in Roman Gaul.

Cissonius: had a widespread cult, from Saintes in Aquitaine to Cologne in Germany. His name appears in 17 inscriptions, sometimes as Deo Cissonius, suggesting a pre-existing cult. (One inscription from Switzerland equates him with Matutinus, a local god also identified with Mercury.) There is also a goddess, Cissonia, who may have been his consort. 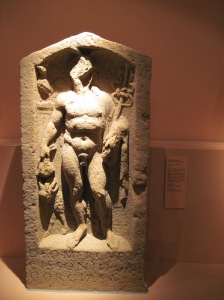 Relief of Mercurius Cissonius from the Palatinate. Wikimedia.

Gebrinus: was the god of Bonn, in modern Germany, but in Roman times part of Gallia Belgica. The Ubii people lived there, and their devotion to their god led them to set up 10 altars to him, although he’s depicted in Roman fashion as Mercury. 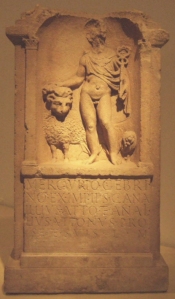 The meaning of “Gebrinus” is not clear, with some tracing it back to Old Norse gífr, monster, while others derive it from Celtic gabros, ram.

Visucius: this god comes from eastern Gaul, mainly the frontier area of Gaul and Germany, as well as an outlier from Bordeaux. His name appears in nine inscriptions, along with an inscription to Visuclus, who may or may not be the same god.

A German inscription (from Koningen) gives him a companion, Visucia, called Sancta Visucia, and from another, damaged stone in Trier we can read “Dea Viscucia”. While Visucius’ cult lies mainly in modern Germany, he has another possible connection to France; an inscription to Jupiter Optimus Maximus, Apollo and Mercury Visucius adds the word SOLI T[…] after Visucius, possibly meaning Solitumarus, a healing god. (See below for more on Soliturmarus.)

Several interpretations have been proposed for the name Visucius: raven, knowledgeable, or worthy. Just to make things more complicated, there’s also a Mars Visucius, showing that the god could be interepreted in more than one way.

Solitumarus: whose name means He Who Sees All, suggest a god of eye diseases, like Apollo Vindonnus. A bronze paetera or offering dish found at a sanctuary in Chateaubleu was inscribed DEO MERCVRIO SOLITVMARO AVG[VSTO], along with a statuette of Mercury with enlarged eyes, and ex-voto style offerings in bronze or bone of an eye or eyes. Since the sanctuary was in Senonian territory, he must have been one of their gods.

I mentioned above an inscription linking him to Visucius. One site (pdf) suggests he was also partnered with the goddess Solimara, both healing deities with similar names. It’s interesting that he would be seen as a Mercury rather than an Apollo-type deity, but no doubt the Senones had their reasons.

Adsmerius: known from one inscription at Limonum in Aquitaine. It takes the standard form of a dedication in fulfillment of a vow. There is another, partial, inscription as well, with the word Adsmerius visible, so Limonum must have been his cult centre. (The name links him to other gods called Atesmerius, Atesmertus, Smertrios and the goddess Rosmerta, suggesting he was a god of abundance, provision or foresight.)

Mercurio Vosegus: was a god of the Vosges forests in northern France. His cult centred on Mount Donon, with a temple at the summit dedicated to him. Images of him show a man holding a shield and bow, accompanied by a dog. Although one inscription calls him Mercury Vosegus, two more call him Silvestris, probably because he was a god of the forest. The other two call him simply Vosegus.

Artaios: another hunting god, whose name comes from the word for “bear”. He was worshipped at Beaucroissant in France. 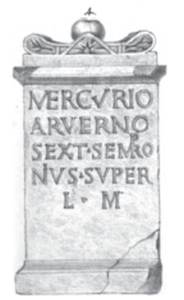 Drawing of an altar to Mercury Arvernus found at Gripswald along with a group of votive altars and reliefs dedicated to the Matronae.

Arvernorix/Arvernus: has eight dedications, mainly clustered around the Rhine in Germany, with one in Puy-le-Dome in France. The French inscription comes from the territory of the  Arverni tribe, but the German ones don’t. While seven of the dedications are to Arvernus, the other is to Arvernorix, king of the Arverni, and of course it comes from Germany, (Miltenberg) just to make the whole thing more mysterious. The French inscription uses the word negotiatores, dealers, which at least fits with Mercury.

Dumias: this god had a temple at the summit of the mountain at Puy-le-Dome, also in Arverni territory.

Canonetonensis: another local Mercury, known from five inscriptions at Berthouville. He may be another hunting god, going by a silver plate with a hunting scene dedicated to him.

Matutinus: I mentioned him above. A god of modern-day Switzerland, whose name probably comes form the proto-Celtic root *matu– bear. He may be a god of hunters like Artaios, or a warrior-god.

Viducus: from an inscription at Bourdeaux. The name can be traced to either vid-, seer, or else vidu-, wood, forest. Either is possible.

Vellanus: probably meaning “commander”, from Celtic *vellaunos, or else “benevolent”. An inscription from Hières-sur-Amby refers to a temple being reconsecrated to Mercury Magniacus Vellanus, while another from Carwent in England calls him Vellanus Ocelus and seems to assimilate him to Mars Lenus.

Cosumias: from Metz, in the Moselle region of France.

On the Bifröst list I also found the names Negotiator, Mercator, Victor, Viator, which seem more like attributes of the Roman god. (Translation: Dealer, Merchant, Victor, Traveller.) Another, Finitumus (related, neighbouring), could be either, since it has a Latin meaning, but could easily describe a local god of neighbourliness or a god of supra-tribal bonds.

The image at the top is by Gargoyle78, on DeviantArt.