Where did the idea that Flidais rode in a chariot drawn by deer come from? It’s not in her main legend, the Táin Bó Flidais, nor in the follow-on story, the Táin Bó Cúailnge. It’s an attractive image, bringing to mind the Middle Eastern goddesses with their lion-drawn chariots,  Freyja with her cats, and Nerthus in her wagon drawn by heifers.

Clearly, many writers on Celtic mythology found it attractive as well:

“Flidais is represented as ruler of the beasts of the forest and is drawn along in a chariot pulled by deer.” – Ross.

“Woodland goddess of venery and wild things, mistress to stags, reputed to drive a chariot drawn by deer..” MacKillop.

“Flidais is a woodland deity and travels in a chariot drawn by deer.” – Sjoestedt.

The answer may not come from a text, however, but a small wagon from Strettweg in Austria. Like the Danish sun-chariot, it probably had a religious function. Of course, it doesn’t exactly come with instructions, but it does have wheels, and the tallest figure on it is a woman, holding a huge vessel over her head. This suggests some possibilities. The most likely use for this chariot was that it was used for offerings of blood or wine.

It’s not certain what the name “Flidais” means, but it might be “moisture” or “wetness”, which could relate either to her feasting or to the blood of the hunt. Or both. After all, rituals involving the blood of slain animals are very common, all the way from smearing a new hunter with it to formal offerings to a named deity.

I have made the image of the chariot large, so that you can see details; the figures holding stags are female, as well as the central figure. We know from Arrian on Coursing that:

Some of the Celts have a custom of annually sacrificing to Diana, while others institute a treasury for the goddess, into which they pay two oboli for every hare caught, and a drachma for every fox (because he is a crafty animal, and destroys hares), and four drachmae for a roe-deer, in consideration of his size, and greater value as game.

When the year comes round, on return of the nativity of Diana, the treasury is opened and a victim purchased out of the money collected, either a sheep, or kid, or heifer, according to the amount of the sum, and then, after having sacrificed and presented the first-offerings of their victims to the Goddess of the chase, according to their respective rites, they give themselves, with their hounds, to indulgence and recreation, – crowning the latter on this day with garlands, as an indication of the festival being celebrated on their account.

This makes the bloody and festive aspects of Flidais’ character clearer. The chariot of the goddess and her attendants, with their stags, may well have morphed into a chariot drawn by stags, just as Manannán had his chariot drawn by horses, and the Morrigan hers, with a single horse (red, naturally). A chariot with whatever animals drawing it seems to have been de rigueur for a deity in the Iron Age. 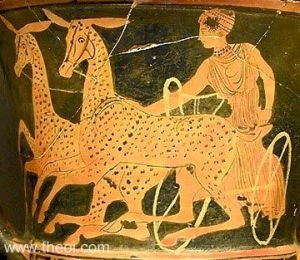 Artemis in her chariot – Theoi.com

The image above shows Artemis in a deer-drawn chariot, and images of Diana or Artemis in their chariots were fairly common on coins as well. Several images of Diana have been found in Roman Britain, but none of them show her in a chariot. Presumably later writers made the connection between the Classical goddesses and Flidais, and gifted her appropriate transportation

Sjoestedt (Loc. 835) sees the chariot or wagon as quintessentially a transport of the goddesses, and she thinks it’s significant that Manannán also drives one. It would have seemed natural to link the cult chariot pictured above with the Irish deer-goddess, and then give her a chariot to drive.

However, we have neither an image of a goddess in a chariot drawn by deer, nor any textual evidence for this idea. So where did it come from? The closest that I have come is a book called Die irische Helden und konigsage by Rudolph Thurneysen. It’s available as a PDF or ePUB file online. I have gone through it with the aid of my extremely poor German and Google Translate, and I cannot find any reference to Flidais’ chariot. But, I cannot be sure that I haven’t missed something. If anyone finds the reference, please let me know.

So, the trail peters out there. 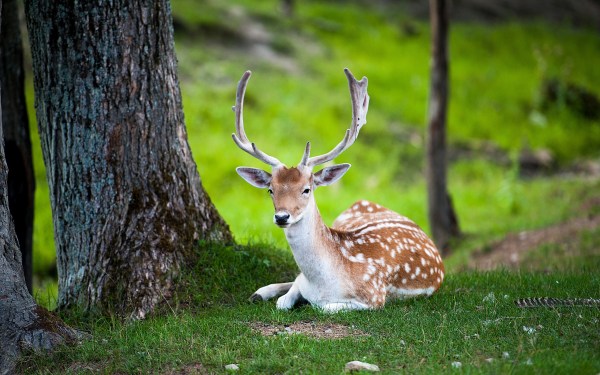 We do have another deer-woman in Irish myth, who also had a son who took after her. She was Sadb or Sava, the mother of Oisín, and grand-daughter of the Dagda. An evil druid desired her, and turned her into a doe when she rejected him. Finn encountered her when he was out hunting, and was puzzled when his dogs refused to attack her. He was even more puzzled when she followed him home. The next morning, the doe had disappeared and a beautiful maiden had taken her place. Finn’s kindness had lifted the enchantment.

Finn and Sadb married, but when he went away with the Fianna, the druid struck again and she was turned into a doe for the second time. When Finn came back she had disappeared. He never found her, despite searching for many years. Later, his men found a boy in the forest, who said a deer had raised him, and Finn realized he had found his son.

Ó hÓgaín (350) thinks that there was an earlier version of this story, in which Sadb was called Blai Dearg, the daughter of Dearg, who was an especial enemy of Finn’s. He thinks she assumed the form of a doe to lure Finn into the woods, so she could seduce him. (This would be one in a long line of tales of otherworldly women seducing human men. It also has strong resemblances to the selkie/swan-maiden myth.)

Sadb, like Flidais, combines nurture and sexuality, Sadb through mothering Oisín, and Flidais through feeding 300 hundred men with her cow’s milk. Both (if Ó hÓgaín’s reconstruction is good) seduced a man of prodigious size. (Finn mac Cool, Fergus). Finally, both are otherworldly women who passed on their powers to their half-human sons. Both, too, combine the wild and the human.

Thurneysen (318) derives Flidais from Flid Ois, ‘wetness of faun’ suggesting her untamed nature. Ó hÓgaín (231), however, thinks the wetness refers to milk, which makes sense, given Flidais’ special powers. I think that both milk and blood have their place here, tame and wild, just like the cows and deer of the goddess.

7 thoughts on “Flidais: A Chariot Drawn By Deer”