Although it’s common in popular books on mythology to describe the Roman goddess Minerva as a simple copy of the Greek goddess Athena, Minerva evolved as a native Italian goddess, influenced by the Etruscan Menvra.

The Etruscans were the pre-eminent power in Central Italy before the rise of Rome, and seem to have disappeared from history thereafter, although their artifacts remained to tease both us and the ancient Romans. (Their attitude towards the Etruscans resembled that of Americans towards the British: a great power to be surpassed; later admired as quaint but attractive, when the anxiety of influence had waned.)

The Capitoline Hill in Rome housed not only the aristocratic elite of Roman society, but also its most important temples. The temple of Jupiter Optimus Maximus (Best and Greatest) was located there, although he shared the space with Juno Regina (Queen) and Minerva. 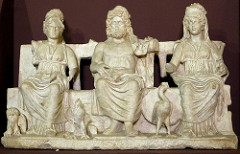 The Capitoline Triad. (You can tell Juno by her peacock, while Minerva has an owl.) Photo by Sebastià Giralt, Flickr.

Together they formed the Capitoline Triad, and other cities eventually built their own temples to the three, called capitolia. These temples had a standard form: they always had three cella, one for each deity, with Jupiter in the middle flanked by Juno on the left and Minerva on the right.

(Another triad also shared the title Capitoline, an all-male grouping of Jupiter, Mars and Quirinus. The latter was a Sabine war-god that the Romans identified with Romulus, their founder, but his cult faded out over time.)

The newer triad, of Jupiter, his wife and his daughter probably reflects Etruscan influence, as Menvra and Uni were important goddesses. Like the Romans, the Etruscans were influenced by Greek religion and myth, especially in their art which began depicting their deities in a very Grecian manner, with the Etruscan names written next to them.

The Etruscans did not write down their myths, so we’re left with a group of deities imagined in art as Greek deities, but with foreign names. So to start with Menvra’s name, there are two theories as to its meaning:

Since many moon-gods from Indo-European civilizations have names connected to *men-, it would be interesting if Minerva had once been a lunar deity. These moon-gods were often linked with the mind, rationality and measurement (like Thoth) so Minerva would fit in well.

Having said this, all Etruscan images of Menvra show her as Athena, mentoring heroes like Perseus or popping out of her father Tini’s head. Her only atypical act is to shoot lightning, perhaps an inheritance from her thundery father. (She was one of nine Etruscan lightning gods, along with the smith-god Vulcan.)

Goddess of Artisans and Doctors

To the Romans Minerva was pre-eminently the goddess of handicrafts and the professions. Her main temple in the city, the Minervium, stood on the Aventine Hill, the working-class district, and the craft guilds used it for their meetings. (As did the actor’s guild.)

Her temple on the Esquiline, however, was to Minerva Medica, the patron of medicine and doctors. Hundreds of votive offerings and two inscriptions mark the spot where it stood. Things you didn’t know: items belonging to or offered to a temple could not be destroyed or given away, so they were stored in cellars known as favissae. This is where the votives were found, no doubt the remains of clear-outs when the temple started getting cluttered.

(Note that if you Google the temple you will get a lot of pages about a ruin that is actually a nymphaeum, once mistaken for the temple, although both were healing shrines.)

Goddess of War and Victory

Minerva was also a goddess of war, like her Greek counterpart Athena. Like her, she seems to have edged the Roman war-god, Mars, out of the limelight over time. Athena Promachos, or Athena the Fighter, was probably the inspiration for this. A giant statue of this aspect of Athena stood in the Acropolis to commemorate victory over the Persians.

She took over his main festival, the Quinquatrus, which marked the beginning of the fighting season for the Roman army. The first day was the goddess’ birthday, followed by four more days of celebrations. (The five-day blowout was possibly result of a misunderstanding: the five in the name originally meant the fifth day, not “five days”. The festival began on Mar. 19th, five days after the ides of March.)

It was celebrated at Minerva’s temple on the Aventine, and another, smaller, temple on the Caelian Hill. (Adkins and Adkins: 188)

Pompey the Great dedicated a temple to Minerva to commemorate his victories in Pontus, Syria and Bithynia, which would seem to indicate that he saw her as equivalent to Athena Nike (Athena the Victor). A famous temple to Athena Nike was built on the Acropolis in Athens in the sixth century BCE and rebuilt after the Persians destroyed it.

No doubt the Roman habit of establishing cults for various Victories: Victoria Parthica, for example, to celebrate victory over the Parthians, encouraged the general.

Among the later emperors, Domitian and Caracalla issued coins showing Minerva Victrix, and Caracalla saw her as a patron goddess. (McGrath: 36) On the coins, she usually holds a small Victoria, complete with wings, in the palm of her outstretched hand.

Modern copy of the statue of a winged goddess, usually recognized as a Minerva Victrix. (Wikimedia)

However, a statue from the old port town of Ostia showed Minerva herself with the wings, changing her from a goddess who can grant victory to victory itself.

A personification of valour, Nerio and Bellona, another war-goddess, were companions of Mars. As such, Nerio was sometimes identified with Minerva. There were important differences, though: Nerio was Mars’ wife, while Minerva was a virgin goddess. The loot brought home by the Roman army was often dedicated to Nerio, who had a temple at the Campus Martius, or Field of Mars, in Rome.