You’ll sometimes see Cisa or Zisa listed among the Germanic goddesses, usually with some statement to the effect that she is the partner of Tiw/Ziu, a god the Romans saw as similar to Mars. Nigel Pennick mentions her in his works, calling her an earth-goddess, and Jacob Grimm devoted several pages to her in his Teutonic Mythology.

Urglaawe, a branch of Heathenry that incorporates Pennsylvania Dutch folklore, considers Zisa one of their deities, with the 28th of September as her day, and the pinecone as her symbol. They draw their inspiration from the legend of a goddess Zisa or Cisa who gave her name to the city of Augsburg and protected it from an attack by the Romans.

You may think from the title that this will be a debunking post, demonstrating the folly of relying on folklore and local pride as guides to mythology. I think the story of how Zisa was created (or reinterpreted) is more interesting that such a one-dimensional and negative story would be. While it’s true that we know of her owes more to folklore about the city of Augsburg than any ancient source, it may well be that there is an ancient goddess behind it all.

Woodcut of Augsburg from the Nuremberg Chronicle. Wikimedia.

The city of Augsburg lies in the south of Germany, in Bavaria. It is the chief town of the Swabian district. Two alpine rivers, the Lech and the Wertach converge on a plateau backed by mountains, forming a fertile area to settle.

The Romans founded the city, known as Augusta Vindelicorum, in 11 A.D. Augusta for the emperor, Augustus, and Vindelicorum because the local tribe was the Vindelici, whose territory stretched across Switzerland and southern Germany. This city, essentially an army camp, became the capital of the Roman province of Raetia.

So where does Ziza come in? The Nuremberg Chronicle, written in medieval times, tells how the Swabians came to settle Augsburg, and how Zisa drove off the Roman invaders:

And they chose for themselves the goddess Ziza, whom they believed to be Ceres. After the same goddess the city was named Zizaria. Her temple remained there intact until the time of the Romans, when it fell into ruin. And the city bore the name of a mountain that to this day the inhabitants of Augusta call the Eisenberg. The city was afterwards protected by the Rhaeti and the Vindelici with walls, turrets and other defenses; and it endured much war at the hands of the Romans. These people always loved freedom and therefore held themselves aloof from the Romans. At a later date the Divine Augustus Octavian sent Titus Ennius, the praetor, with the Marcian Legion, and other generals, against them. In this legion Avar Bogudis, the king’s son, a youth trained in weapons among the Greeks and Latins, and Varus (Varro), a tribune of the soldiers, became famous.[It is ironic that nothing is known of Avar Bogudis, who became famous in this battle. But see further the note below.] These besieged the city in the late summer with a large force of Romans, and harassed it in many ways. In this storming Avar the Greek was slain, and he was buried in the village of Criechsaueron. The following inscription has been found indicating his origin and his end. The praetor also perished together with his Marcian legion so that few survived that battle who could tell what had taken place. And the destroyed legion gave to the region where the defeat occurred the name that now in the middle of the city is called Perleich.[“Destroyed legion” in Latin is perdita legio. The first two syllables of each Latin word, per and leg, were believed to be the components making up the name Perleich.] Thus it is written. The hill here indicates by its name the Roman disaster where the Marcian Legion at once utterly perished.[This sentence and the one that precedes it are not in the German edition of the .] Varus (Varro), whom they called Verres, fled over the water, hid himself in the marshes, and gave his name to Lake Vernensee. Afterwards, that consul died miserably.
(Folio XCI verso)

I’ve left out the part where the Swabians, descendants of the Trojans, were harassed by the Amazons and their queen, Marsepia, because it’s a long quote already. It’s the only myth about Zisa that we have, however, so I gave it in full.

The editor of the online Chronicle is skeptical about this story, which seems to have no basis in any written history. I tried to fact-check it, but Titus Ennius or Annius is hard to find, as there were two well-known Romans by that name, and neither lived at the tme of these events. The commentary in the online Chronicle thinks the Augsburgers borrowed the story of the Roman defeat in the Teutoburg Forest for their legend.

It certainly makes a more patriotic story than the original, in which Augusta Vindelicorum plays a very small part in the conquests made by Augustus’ nephews, Drusus and Tiberius, as their armies swept across Germany. We could be generous and assume that the inhabitants did put up a fight, and maybe did briefly check the Roman advance, but if Zisa did save the town, it wasn’t for long.

The Chronicle also mentions the local name of the settlement, Zizaria. (Other documents call it Cisaris.) According to local legend, the mountain where her temple stood was called Zizenberk. These folk-etymologies have been discredited by scholars, but they were valid for the Augsburgers, who held a procession every September 28th in her honour. (This was the date of the legendary battle.) 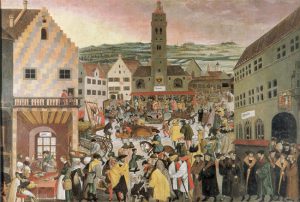 Perlach market place 1550. You can see the tower in the background.

Augsburg’s symbol was the pinecone, the Stadtpir, stamped on every piece of cloth passed by the city’s inspectors, and all its metalwork.1 So it was logical that the pinecone became incorporated into Zisa/Cisa’s imagery as well. A statue of Cisa showed her with the pinecone, and when the town tower (the Perlachturm, referred to in the legend as named after the “lost legion”) was rebuilt, the weathervane also honoured Cisa, showing a woman with the mural crown of a protector-goddess, holding a pinecone.

She may have been a pagan goddess, or at least was considered one, but she had found her way into the heart of a Christian society. Whether out of a desire not to cross the luck of their city, or a sort of antiquitinarianism, they celebrated Cisa, in more or less orthodox ways. One of the more Christian was a plaque on a church outside the city walls, which read:

Impious worship long ago defiled the Gallusberg,
and then offered it you, Ziza.
(Wood: 95)

It’s a bit mind-bending to imagine that a devoutly Christian medieval city would have a festival in honour of a pagan goddess that they had more or less invented, or at least reimagined into being, but it seems to be so. It seems to have been an instance of “invented tradition“, perhaps to justify a non-Christian holiday, or to reaffirm pride in the city and its pre-Roman origins. But the medieval cult of Zisa was a robust and popular one, no doubt answering some need for the Augsburgers.

The Augsburg coat of arms. Wikimedia.

Most people’s knowledge of ZIsa comes from Jacob Grimm’s Teutonic Mythology. He devotes seven pages to her, most of which incorporates lengthy quotes in Latin from various medieval chronicles.

Grimm also points out the historical problems with the legend of Zisa as saviour of Augsburg, but he does include some other medieval traditions about Zisa, such as a poem from the 13th century, which I will attempt to translate:

They built a great temple
to give to Ziza the goddess
that they worshipped according to
pagan customs in those days
The city was also called Zisaris
after the goddess, which was the prize (?pris)
The temple long stood uninjured
until in age its fall was decreed
and as from age it passed away
the mountain received its name
where the work (werck) had stood,
is stil called today, Zizenberck.

I didn’t say my German was any good! Seriously, the rhyme ends with the couplet werck/Zizenberck, connecting the mountain and Zisa, as well as the city.

Grimm suggests that Zisa was either the Isis of the Suevi that Tacitus mentions in his Germania, or else the feminine companion of the god Ziu. The second suggestion makes sense, while the idea that Tacitus’ Isis was “Cisa” without the “C” seems unlikely. Also, the Suevi were mainly in northern and central Germany, while the Vindelici were in Bavaria and Switzerland. Going by the medieval evidence, ZIsa’s cult revolved around the city and the mountain, while the “Isis” cult involved a ship. (The Frisian goddess Nehalennia seems a more likely candidate for Isis, as the ship was her emblem.)

Other Early Modern scholars tried to link Zisa and Cybele, mostly based on the pinecone motif. I’ve already mentioned how the pinecone became the symbol of Augsburg, mainly based on the discovery of an a giant stone pinecone dating back to Roman times. The oldest city seal shows a bunch of grapes (a pun – Augster is a kind of grape) and then came a tree of life. After that the discovery of a giant stone pinecone from Roman times changed the arms to a pinecone, and they have remained that way ever since. This makes it less likely that the two goddesses were connected.

Unfortunately, modern scholars reject Cisa/Zisa when they mention her at all. Rudolf Simek says:

(Cisa, Zisa) is supposedly the name of a Germanic goddess who, according to a Latin historical text from the 11th century, was worshipped in Augsburg in heathen times. While Grimm made extensive speculations about the identity of this goddess, today the supposition of a goddess Cisa is rejected because the source text does not stand up to critical examination.
(Simek: 52)

One of the scholars he references, R. Kohl, says that that Augsburg wasn’t really named for Ziza – a number of Old German glosses to Latin texts called it ‘Agistadium, Eistetin.’ He suggests that these names were derived from the masculine personal name Agi or Egi. He concluded that since there isn’t really any convincing evidence for Zisa’s existence, except for one historically dodgy legend, she should probably be dropped from the Germanic deities.

So was there never a Zisa? I’m reluctant to throw the baby out with the bathwater, partly because discoveries like the Ashwell finds (which revealed a new Celtic goddess, Senuna) make me leery of saying a goddess never existed. There may well have been a goddess of Cisaris/Zizaria, pehaps a protectress like Ancamna and Nemetona, and associated with the mountains around the city, like Bergusia.

1. Those receiving state assistance and licensed beggars had to wear the Stadtpir as a badge to show that they were the “deserving poor” and not riff-raff.↩

References and Links
Online Version of the Nuremburg Chronicle
Teutonic Mythology vol. 1 at the Internet Archive

3 thoughts on “Zisa: the Augsburg Goddess or Invented Tradition?”